WELCOME TO OUR BLOG - OUR FIRST POST: MARDI GRAS WEEKEND

HAPPY NEW YEAR! We have been dragging our heels on starting a Blog, but after great encouragement from Polt-Erratic (blogger professional), we are going to give it a try. Mainly because we want to share our adventures and photos with our family and friends and sending them in an email is getting to be difficult. Those of you who know us well and love us (which should be anyone reading this) know that D and I are arguing over exactly how many photos to send.....I want lots.....he only wants the best three. Guess who won? : )

January was a quiet month for us. It is hard to believe it is over and we have moved into February. Friday starts our busy spring travel with Slovenia. Over the next few months, we will also travel to Amsterdam, Paris, Geneva and London (humm .....do our hosts know this yet?). Donald's parents arrive in late April for a three week visit. We are really looking forward to this.

But this week is Mardi Gras. Many cities and towns celebrate the last day before the six weeks of Lent. Belgium’s most famous Mardi Gras festival takes place in Binche, a town of about 30,000 people, 34 miles south of Brussels. They say it attracts thousands of visitors annually for this event. So we jumped on the train Sunday morning and headed to Binche to see what this was all about.

On  shrove Sunday, the first of three days of Mardi Gras, the Gilles, and others in peasant, Harlequin and Pierrot costumes, parade through the streets of Binche and dance to music played by brass bands, showing off their dazzling costumes. It began at at 10:00 AM, we arrived around 11:00. Wow, what a sight! It was so festive and they were right, there were thousands of people........ It was quite the experience trying to walk through the crowds, let alone take photos! But everyone was very friendly and in a very good mood. Those dressed up loved to pose for the camera, even the children. Ratatouille was one of the themes. For both children and Adults. Confetti was everywhere. The children in the 2nd photo are picking it up off
of the ground so they can throw it again. Not so sure these two were enjoying the day! He was a shy one! Hello Kitty! Dads....would you do this for your daughter? 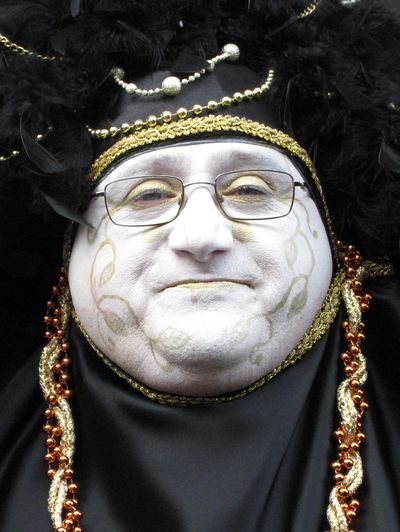 Some costumes were very elaborate as you can see from the three men above. This group was from a clockwork orange!  Everyone was having fun! HAPPY MARDI GRAS TO ALL!

{note - if you can not tell, that is confetti I am throwing in your honor!}