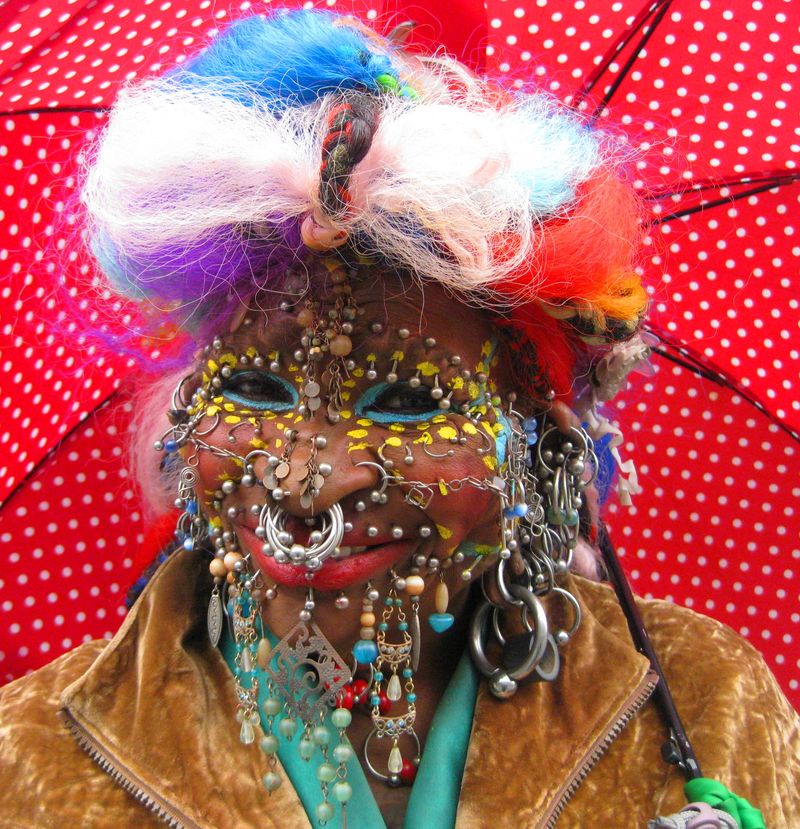 We were pleasantly surprised to see that Edinburgh, Scotland was such a creative, humorous, and an all around fun city.  And always high on our list...it had delicious food!  This is Elaine Davidson, the world's most pierced woman. 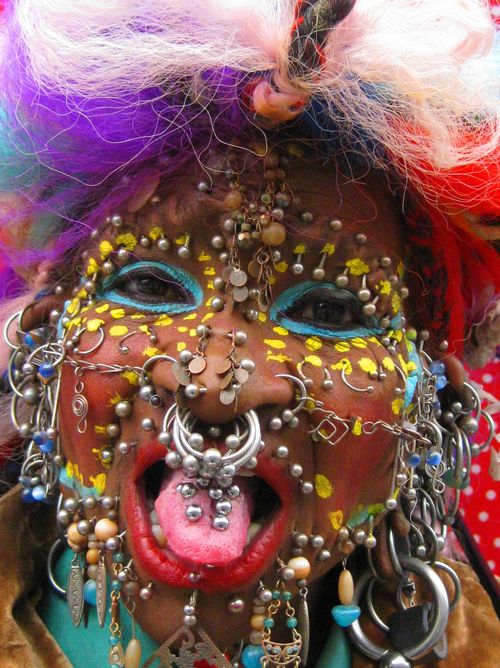 She has a grand total of 6005 metal adornments on her body.  She is in the Guinness Book of World Record.  In 2000, when she was first accredited, she had 462 piercings, with 192 in her face alone.  Nine years later she is up to 6,005 including more than 1,500 that are internal.  Not sure I really want to know what that means! 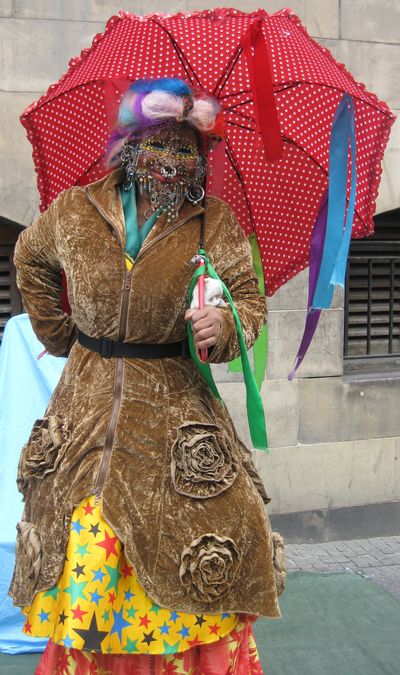 She was born in Brazil and was a nurse.  She now owns her own piercing and tattoo shop in Edinburgh.  At least she has real experience with needles!  I paid one pound to take these photos.  Money well spent!

Edinburgh is the capital of Scotland.  It has an old town where medieval architecture was preserved.  This old town city center is a UNESCO World Heritage Site.  As you can see from the beautiful blue skies, had unusually sunny and warm weather.  A real treat for Scotland.

There is also what is called "new town" built in the neoclassic style in the 18th century.  The juxtaposition of the old and new gives the city such unique character. 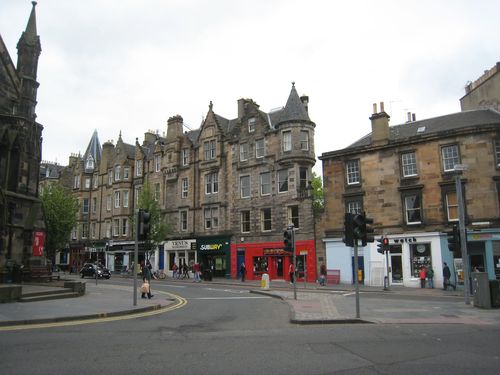 The main feature is the castle, built in the 16th century.  It sits high on a hill above the city. 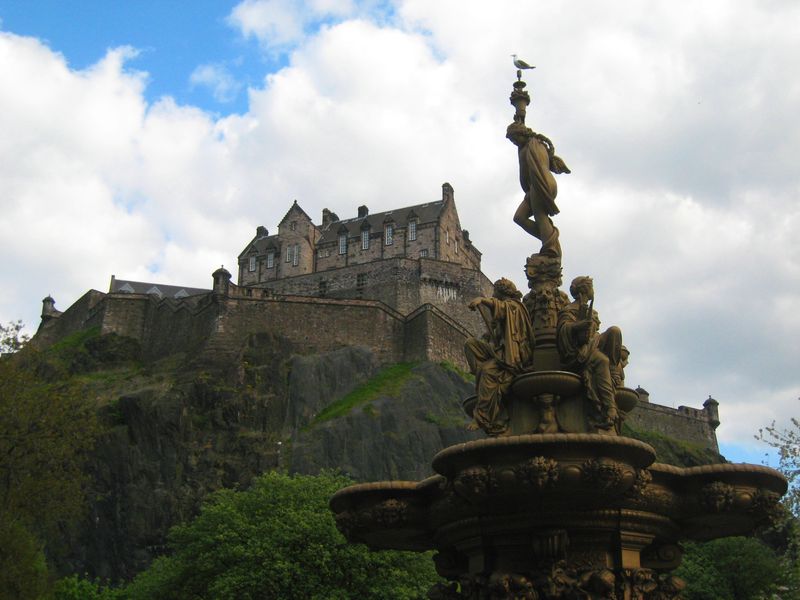 It is built on a Volcanic Rock (now extinct).  History shows that there was a fortress on this site as early as AD 600.  We toured the castle many years ago so we skipped it this time. 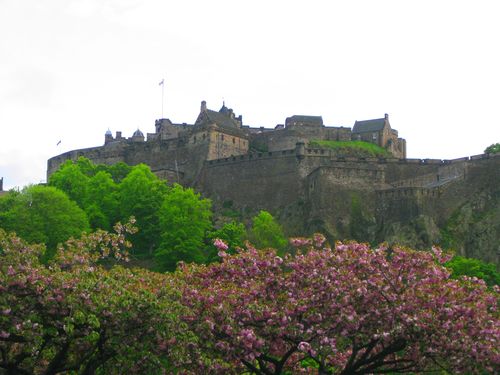 We visited the reputedly haunted, Greyfriars Kirkyard graveyard.  Burials have been taking place there since the 16th century. The haunting is attributed to the restless spirit of the infamous "bloody" George Mackenzie.  Many visitors report feeling stage sensations; touched, pulled, bitten, and scratched. 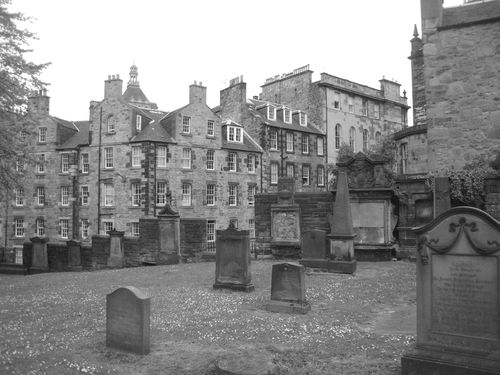 The most recent was in March of this year, a women suffered a single stabbing sensation to the top of her head and scratches on her arms.  Me thinks she was at the pub too long. We encountered many funny signs - Haggis, Neeps, and Tatties, translation:

Haggis = sausage with oatmeal and spices cooked in a sheep's stomach Now here is a place to get your hair cut...a shot of vodka with your trim! 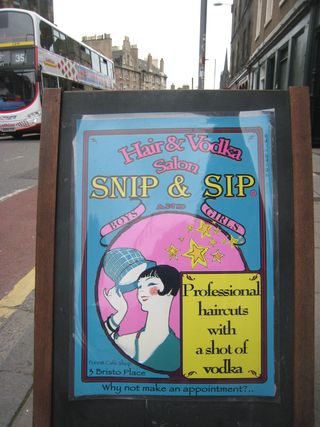 And how about the upstairs neighbor to this nursery?  Look closely at that window on the right. 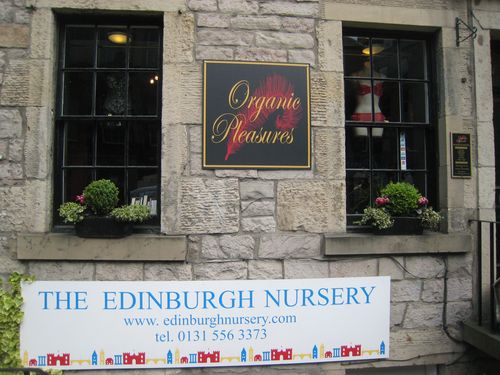 Edinburgh  has several working artisan studios.  This was a man who made beautiful knit clothing. 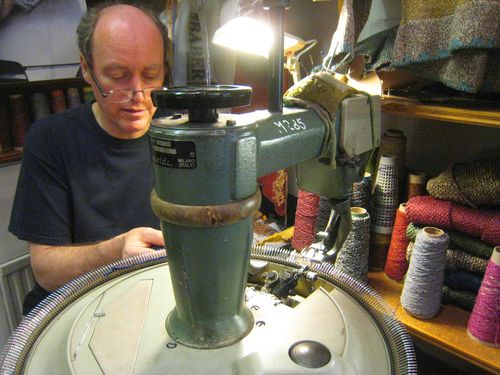 He had quite the intricate machine.  I tried on a few of his designs, but you needed what I call "the euro-body" to wear his clothes. 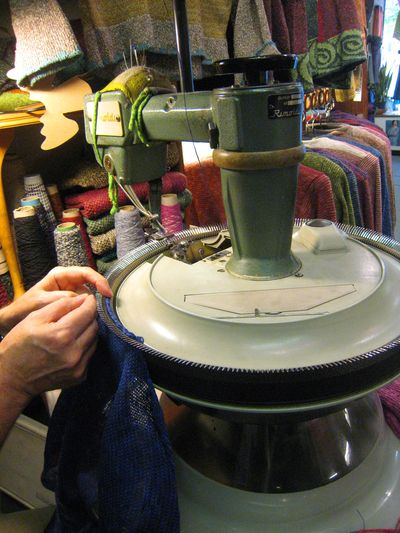 In another studio a woman made fun colorful hats. 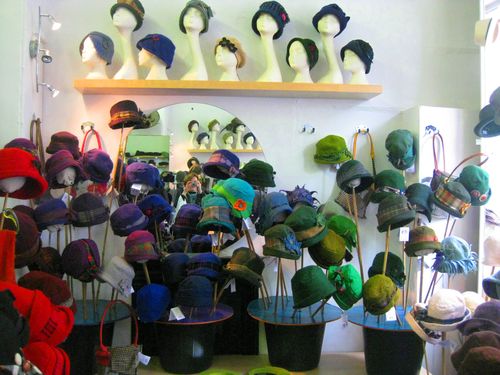 There were also many vintage resale shops selling clothes from the 1920 - 1980's.  I bought a few pieces of vintage linen but no clothes. 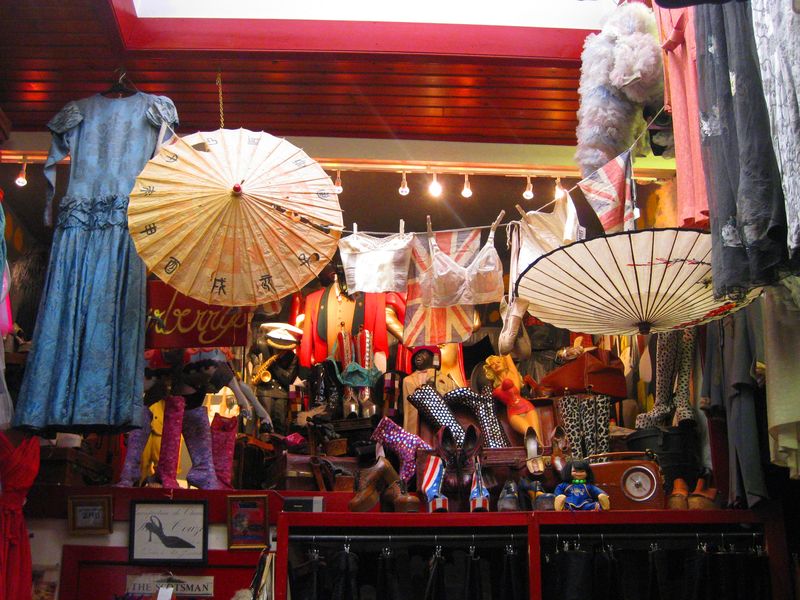 A very colorful window from a vintage shop. 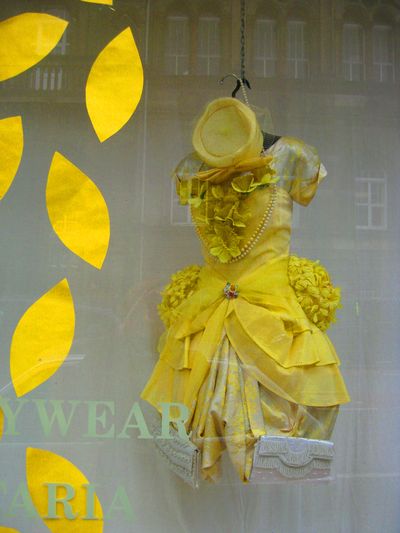 And the hot color for kilts was purple and blue. And yes, we did see a few men wearing them on the streets.  Since we were there on the weekend, there were several weddings and they wear kilts instead of tuxs.  Here is a sweet photo of a young bridal party.  How cute are the groomsmen in their kilts? 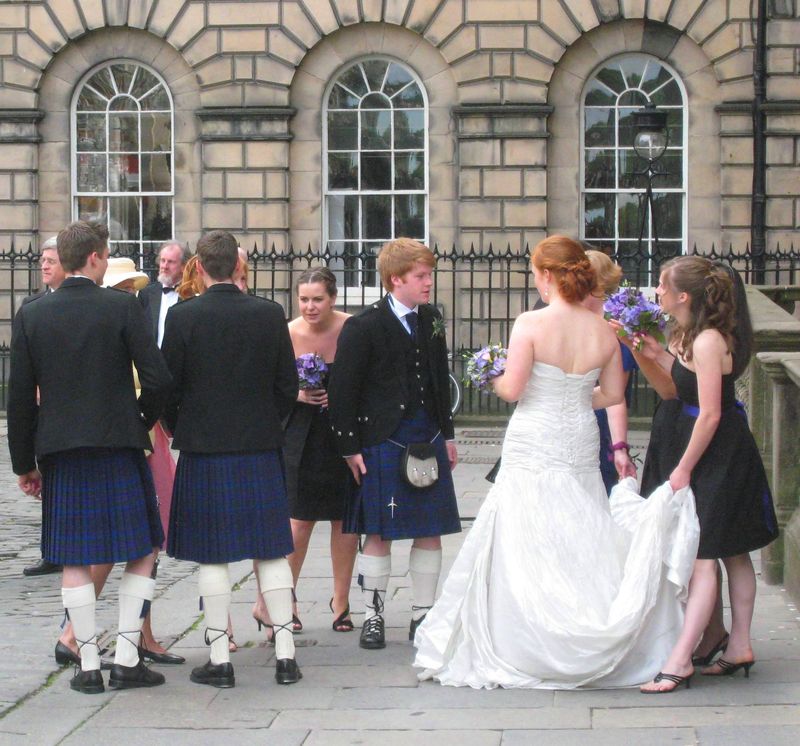 This man was the bag pipe player at a wedding that was taking place in our hotel.  Love the shoes! 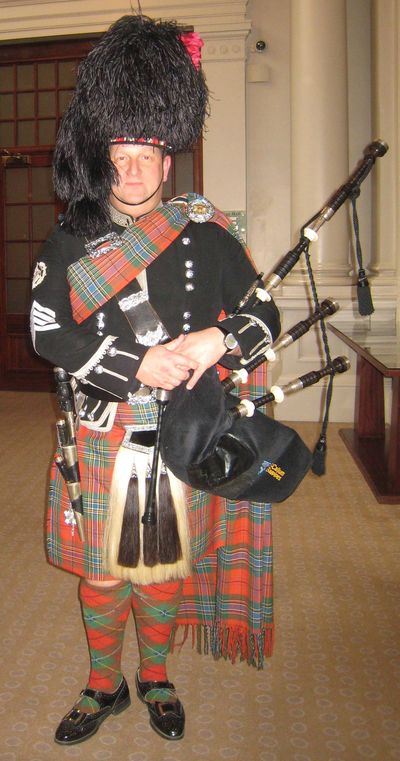 The food was fresh and contemporary, not what we were expecting.  We thought it would be more like British and Irish pub grub.  My favorite was a restaurant called  "the dogs". 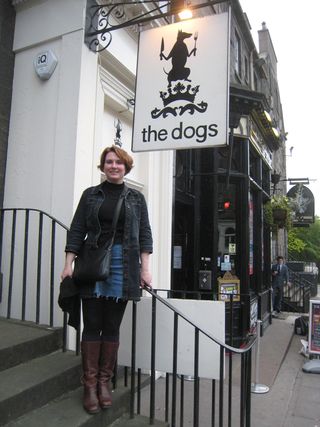 The coronation chicken I ate there was my fav and I have been making it every week since I ate there.  I am including the recipe (my version) at the end of this blog.

D's favorites were the roasted pig..... 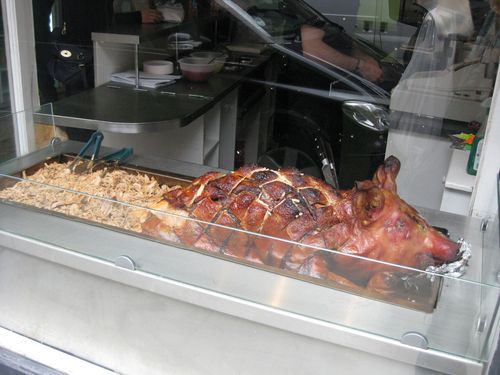 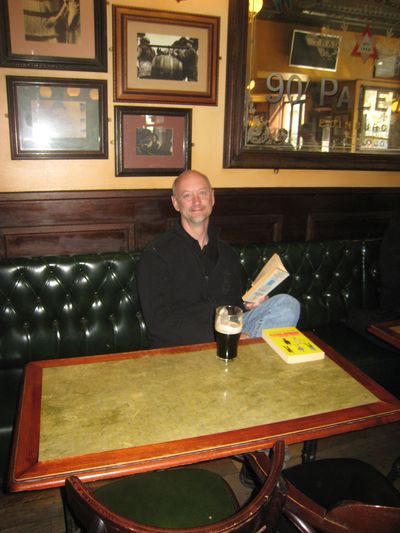 the highlight of the trip..... 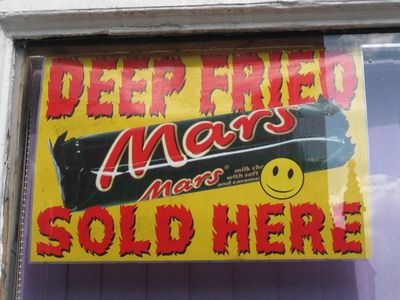 We had read about them in magazines but have never tasted....a deep fried mars bar!  And oh was it good. Okay, so it looks gross, but when you bit into this hot gooey mess, if you closed your eyes, you would have thought you were eating a very expensive french dessert. 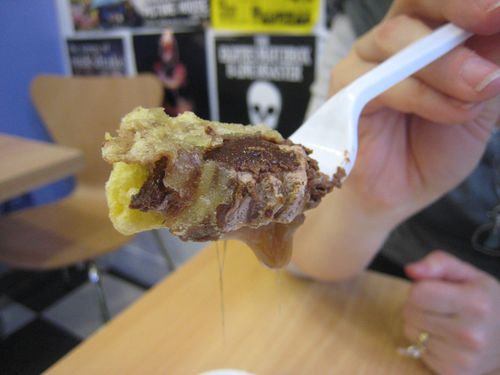 And no matter how many times I see them, I am still amused by the red phone booths. 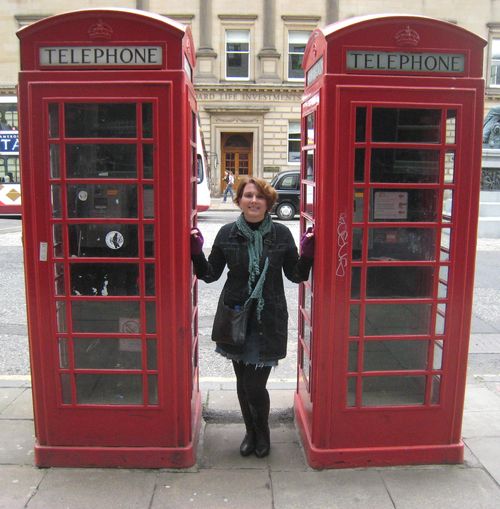 One last photo of the reflection of a castle in the Pizza shop window.  I hope you try the coronation chicken. 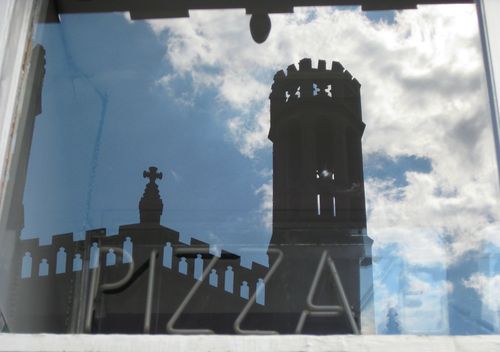 3/4 cup toasted cashews (I use almonds or pecans)

Directions:   In a large pot, cook chicken in lightly salted boiling water for 20 minutes. Drain, cool, and shred.  In a large bowl, stir together chicken, raisins, celery and mango. In a medium bowl, mix together mayonnaise, curry powder, chutney, and lemon juice. Season with salt and pepper, then toss gently with chicken mixture. Stir in the nuts. Chill or eat at room temperature (not hot).