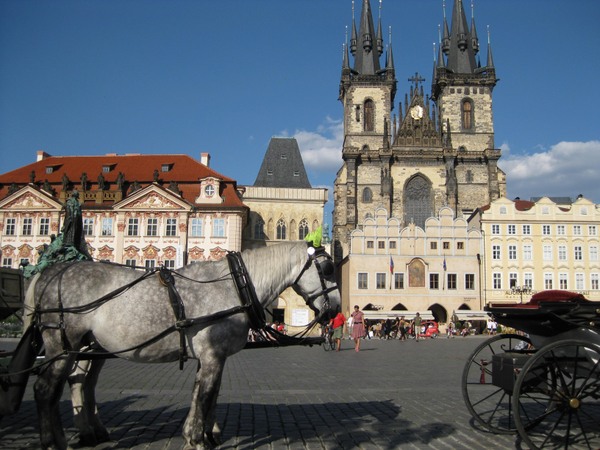 D took me to Prague to celebrate My birthday.  How sweet is he?

Prague is the capital of the Czech Republic.  Fun for me as my father's family was from Czechoslovakia, my father's older brothers were actually born there.  He was the first born in the United States. 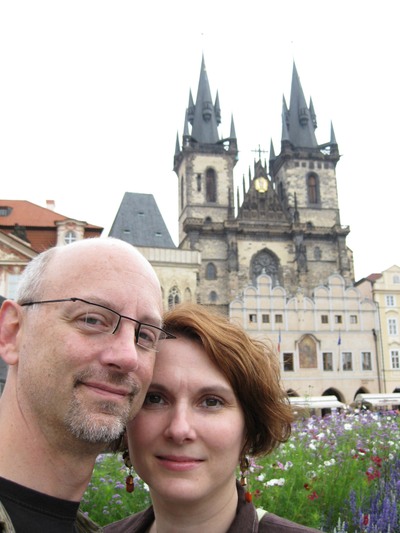 On January 1, 1993 the country of Czechoslovakia peacefully split into the Czech Republic and Slovakia.  We were there in 1996, not long after the split and it has changed significantly in 12 years.  Well, not the buildings, as many date to the 9th century, but the availability of hotels, restaurants, and the culture.

The weather was picture perfect in this fairytale city. 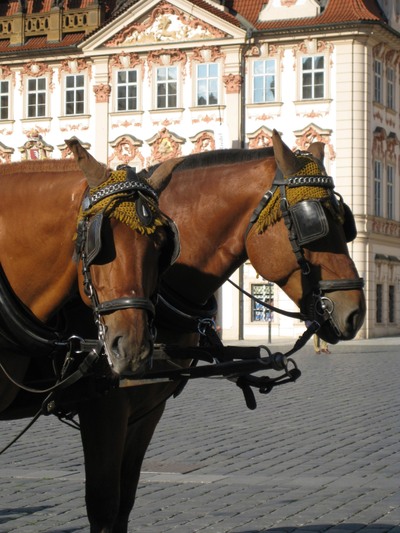 The Czech Republic is part of the EU (European Community) but they do not use euros as their currency, they use Czech crowns.  In Prague, they do accept euros or crowns, but the exchange rate is very high for euros. It is the land of beer, incredible architecture, and beautiful women.  It rivals Belgium for beers.  Prior to us moving here, D favored Czech beers, his heart now belongs to Belgium.  But he still favors Czech women  : ) 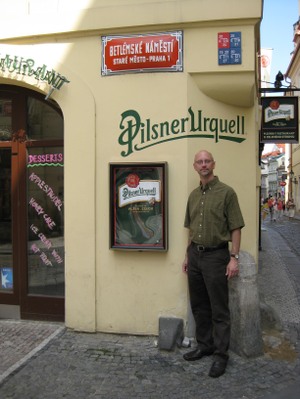 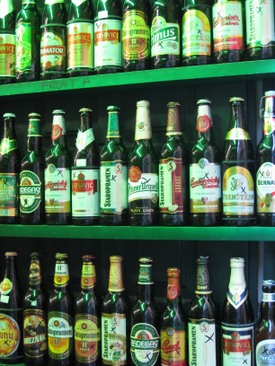 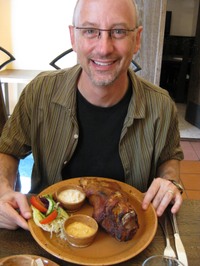 Eating in Prague - most meals consist of pork or beef and sauerkraut and dumplings.  Dumplings (knedliky) is a traditional Czech side dish made from potato flour, boiled in water in the shape of a roll and then sliced and served hot.  Goulash is also a popular dish.  As Czechs say before a meal - Dobrou chut! Which means I wish you to enjoy your meal.

Donald has a tradition on MY birthday, he always buys a pair of shoes.  No, not for me - for HIM!  He claims we are always shopping on my b-day and I can never make a decision, but he can.  RIGHT. 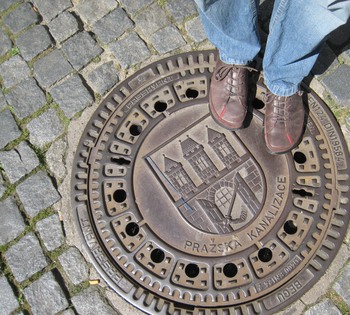 I did get a fun b-day present while I was there.  One of the crafts that they are know for in the Czech Republic is crystal and handmade glass beads.  I got several scoops of beautiful beads. 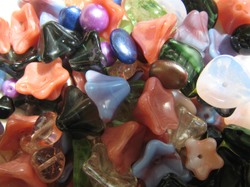 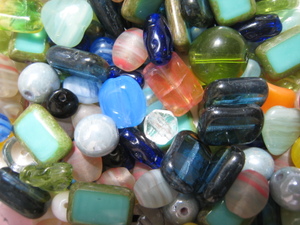 Another craft they are known for are their handmade/hand carved puppets.  It is fascinating to look at the level of detail in each one. 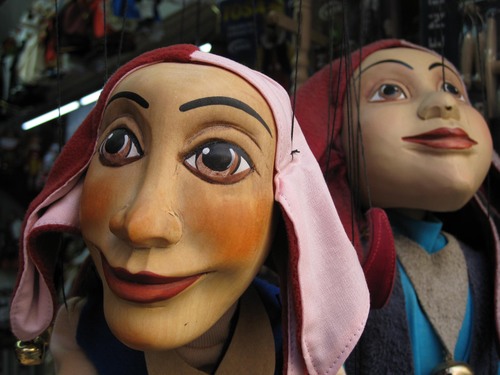 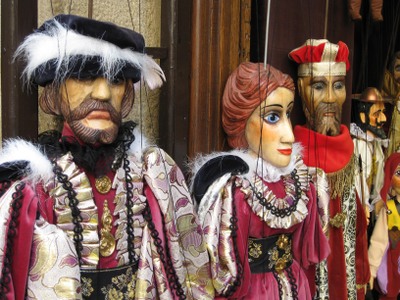 The architecture is quite remarkable in Prague. 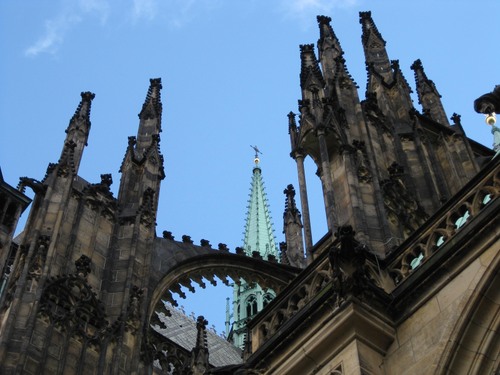 It was one of the few cities in Europe that was not destroyed by WWII so most of it's architectural structures are true to form.  It contains some of the most varied architectural styles of any city in Europe.  From Art Nouveau: 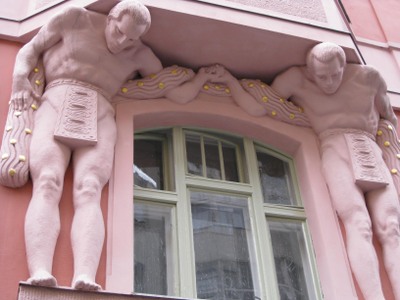 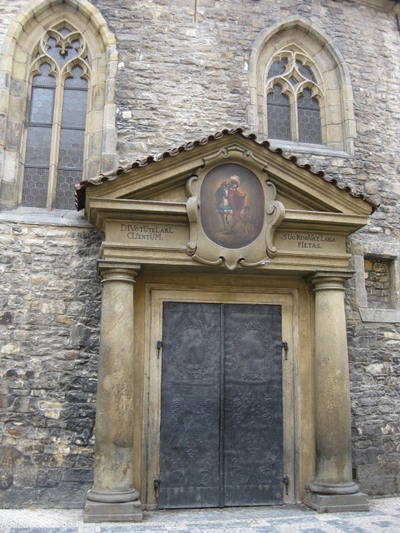 even Ultra Modern (called the Fred and Ginger building): 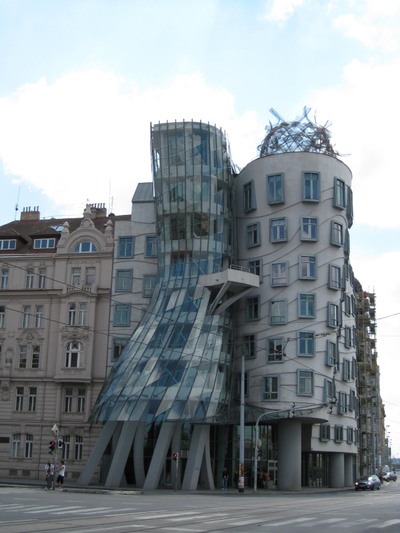 In earlier years, they did not have addresses on the buildings, but had the type of business that it was. For example, this one was probably agriculture of some sort - wheat? 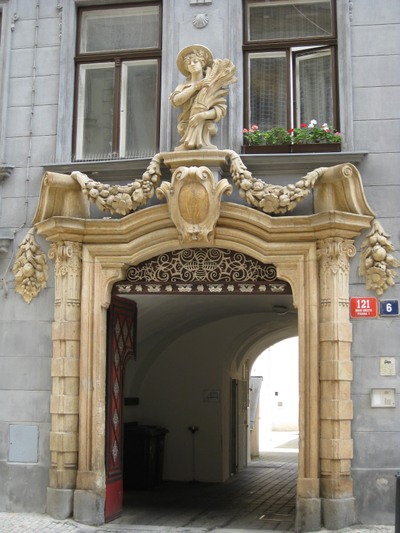 The main square has a beautiful astronomical clock that dates back to the 15th century (1410) (click here for more info). 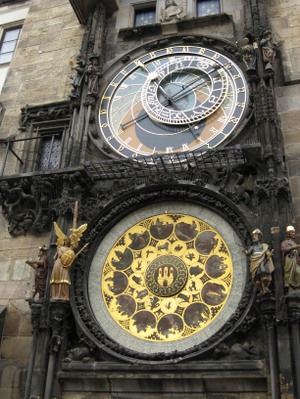 Our friends Dave and Allison from London (who we will be visiting this weekend) were in Prague the same days we were - what a coincidence!  We spent the day together at Prague castle.  They also celebrated my birthday dinner with us. 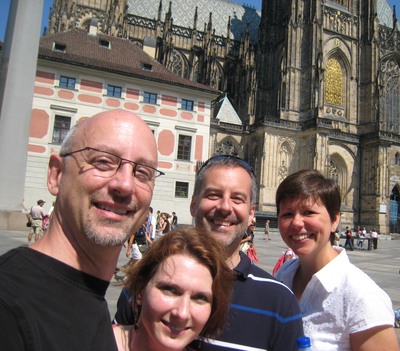 Prague Castle is one of the biggest castles in the world (according to the Guinness book of world records).  The first known building on this site was constructed in 870 by Prince Borivoj.  In the 12th century it was replaced by a Romanesque Palace and in 1541, following a fire, Prague Castle underwent further changes.  In the latter half of the 16th century Empress Maria Theresa had the castle buildings rebuilt in Baroque style, their current appearance. 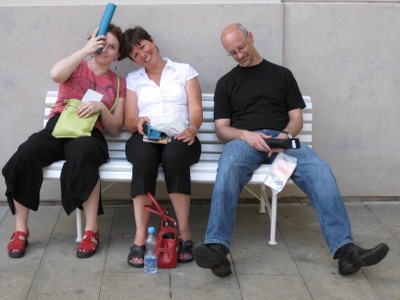 After a long day of history, we decided to check out the BEER! 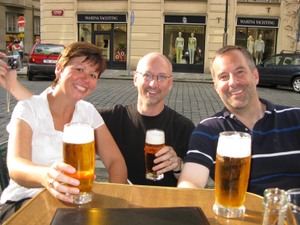 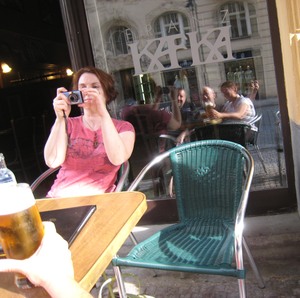 If you look closely, D is taking my photo at the same time I took this photo of the two D's and Allison   - see them in the reflection behind me.  Hmmm, I think this was after a round of the BIG beers.  We were at the Franz Kafka bar.

Allison and Dave travel like we do and they have a great Blog - you can visit them at polterratic.  Her photos of the queen of England are the best!

It was surprising to see how crowded Prague was.  We have never been to Europe in the heart of the summer. 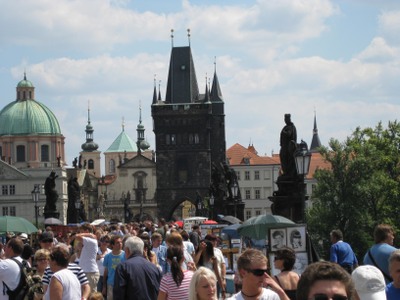 The Charles Bridge (above and below) is a common known landmark of Prague.  Designed by Peter Parler, it was completed in 1400. 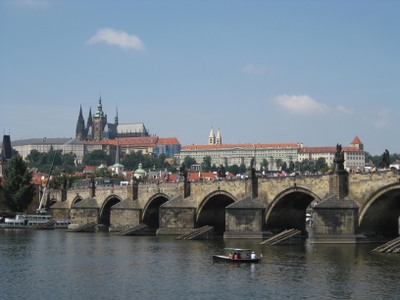 It is now a pedestrian-only bridge, but traffic ran on it for over 600 years!

One of the statues on the Charles bridge: 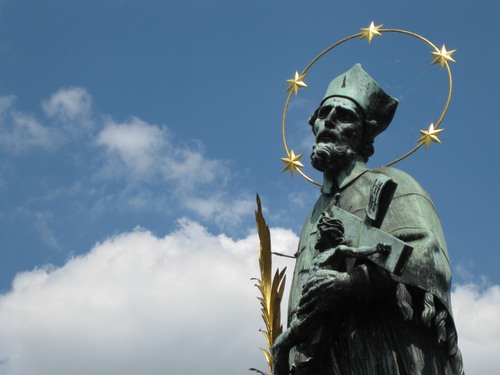 Prague is especially pretty at night. 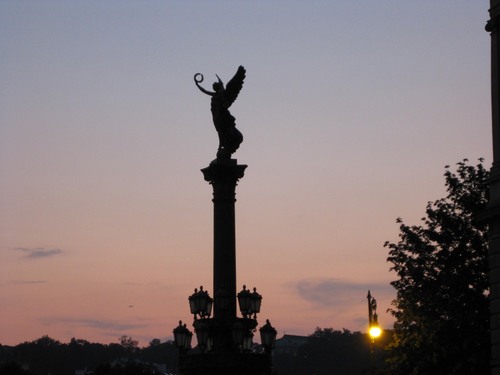 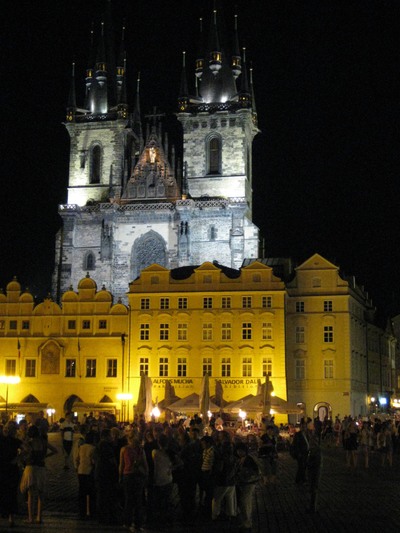 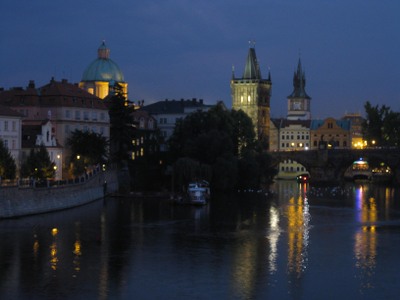 The final photo - little nesting dolls that I am completely obsessed with.  It drives D crazy because I have to examine each one at EVERY store ....and they are Russian, not Czech.  These are magnets, not the real dolls.  But I loved the color in this photo. 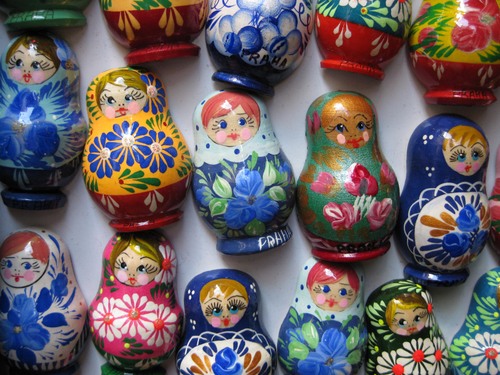