Home Archives Profile Subscribe
Where have we been?
Beijing, China

One from the bucket list - the Great Wall of China 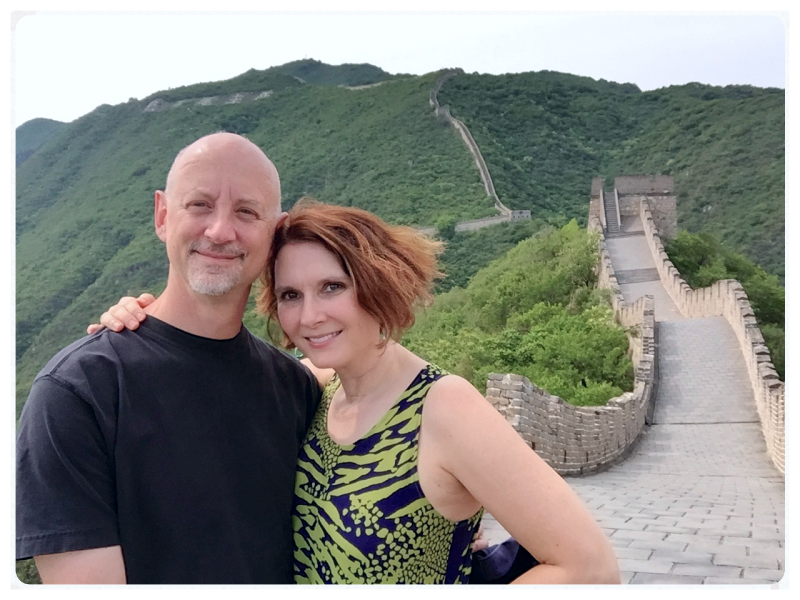 This one was on the bucket list for me. How could we live in Asia for four years and not see the Great Wall of China? The timing was not the greatest as D had knee surgery ten days prior.  He had to climb with a brace, but he was a real trooper! 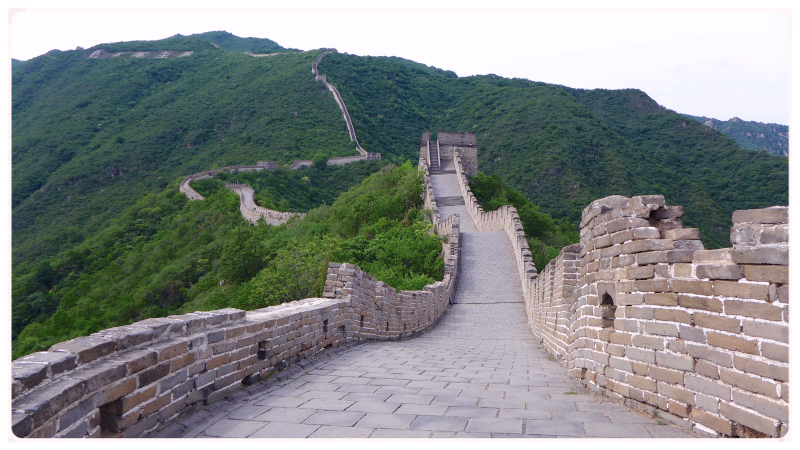 Walking on the Great Wall was amazing and certainly worth the journey.  To see the wall zigzag through the mountains is a special sight.  Like many places we visit, photos don't do it justice.  You really need to see it in person to feel the enormity and the history. 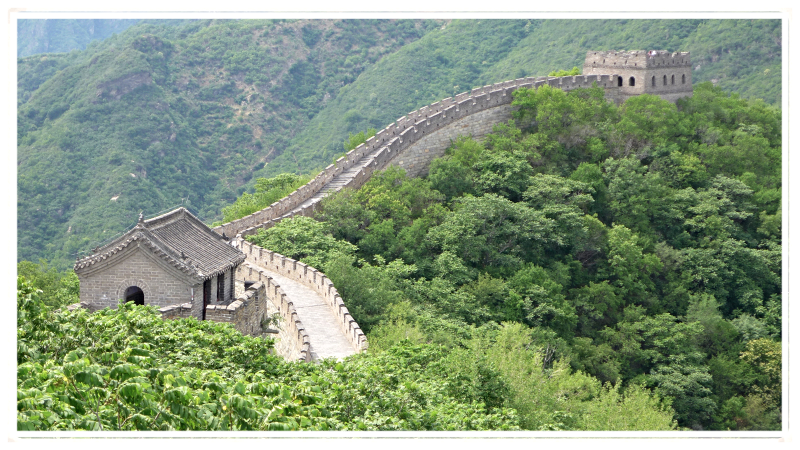 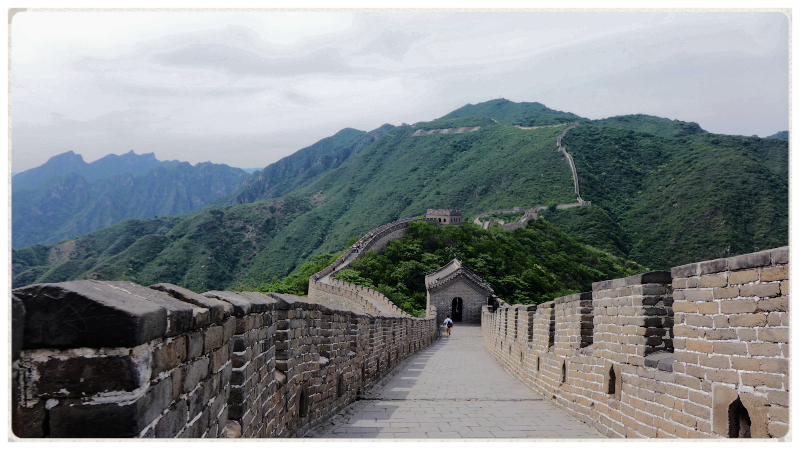 It is considered the world's longest wall and the longest man-made structure in the world.  Reconstruction and protection of the Great Wall began with Badaling in 1957.  In 1987 it was placed on the UNESCO World Heritage List. 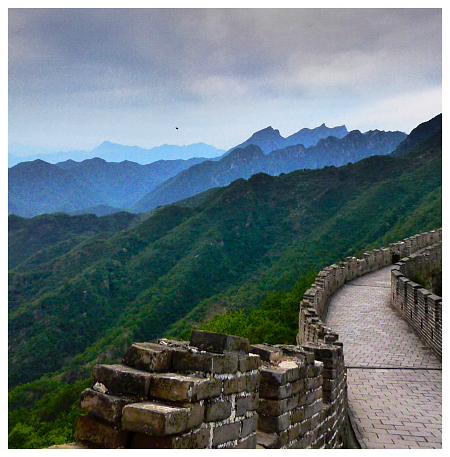 After a lot of research, we opted to visit the section at Mutianyu and spend one night at a nearby hotel. There are other parts of the wall you can visit that are closer to Beijing, but Mutianyu is the best-preserved section and less crowded. 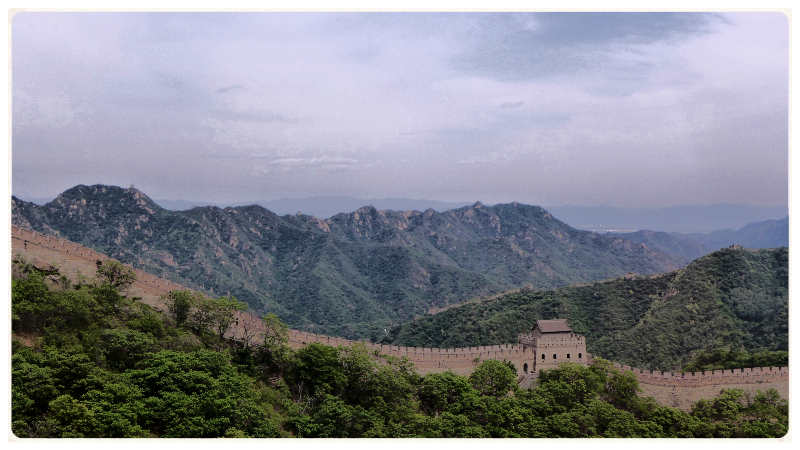 The Great Wall at Mutianyu was built in the early Ming Dynasty (1368 – 1644).  Glutinous rice flour was used in making the binding material to bind the bricks. 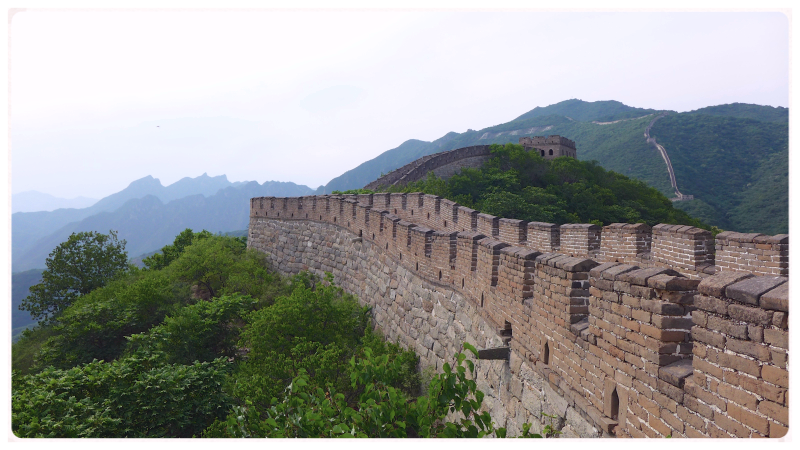 Sadly, nearly 1/3 of the Great Wall has disappeared due to humans and natural erosion.  During the Cultural Revolution (1966-1976), many bricks of the Great Wall were taken away to use in building homes, farms, and reservoirs. 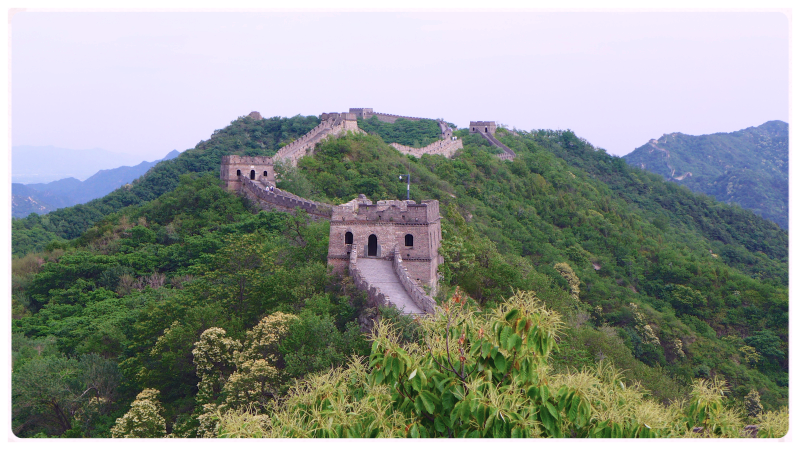 The watchtowers on the great wall are mainly 2 stories tall. The first floor was used for soldiers or to store food and weapons. The second floor served as a lookout.  There are only 23 watchtowers left. 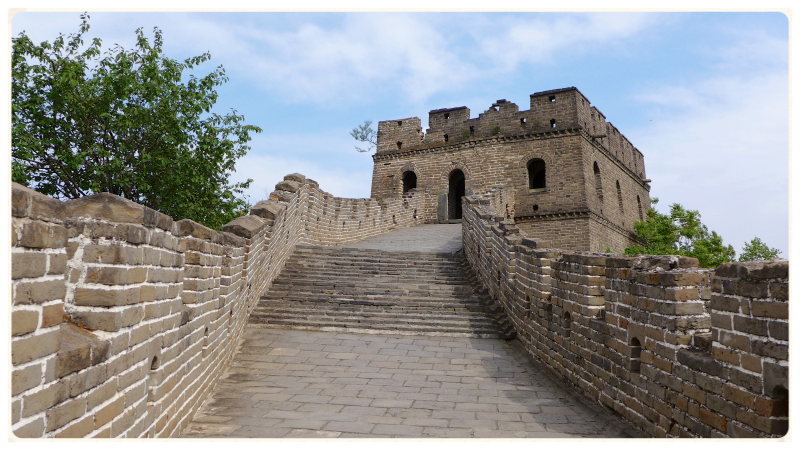 The Great Wall of China has been called the longest cemetery on Earth. Over a million people died building the wall and archaeologists have found human remains buried under parts of the wall.  There is an old legend about a woman called Meng Jiangnv, whose husband died building the Wall. They say her weeping was so bitter and loud that a section of the Wall collapsed, revealing her husband's bones so she could bury them. 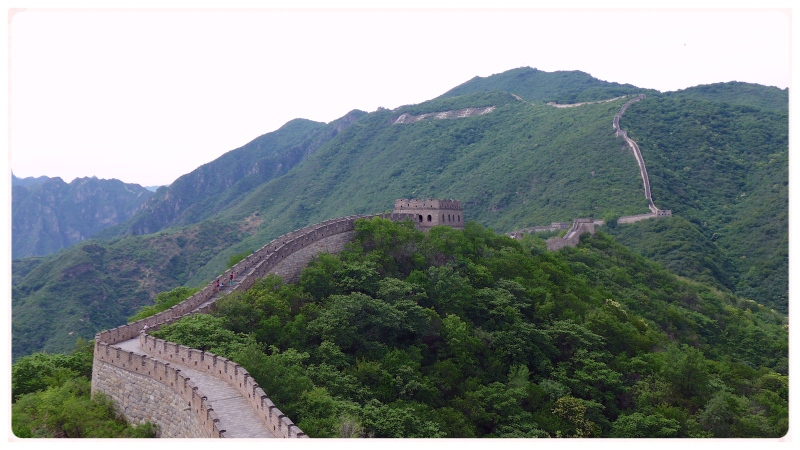 There is a marathon held each year in May.  It attracts   over 2500 runners from all over the world.  There are many different levels including a full marathon (26 miles), half marathon (13 miles), 10k, and 5k distances. We were very lucky with the weather as we only had an afternoon and a morning tour the wall.  We went to see it as soon as we arrived.  It was a good thing as the next morning we woke up to heavy rain. 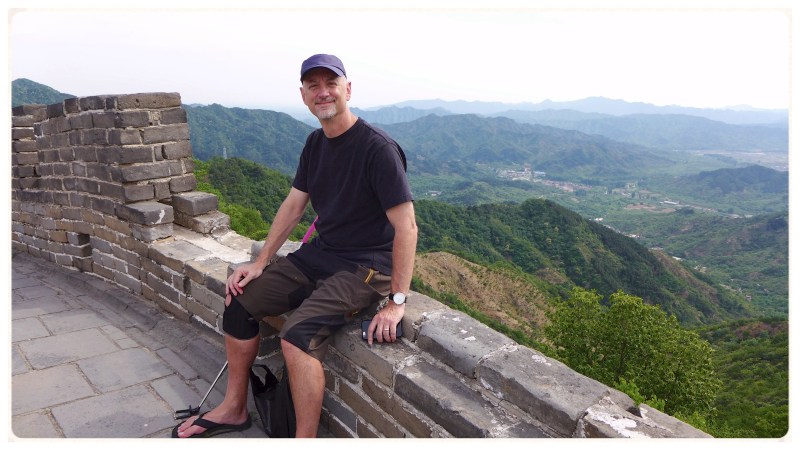 Contrary to common belief, the Great Wall of China cannot be seen from space with the naked eye. 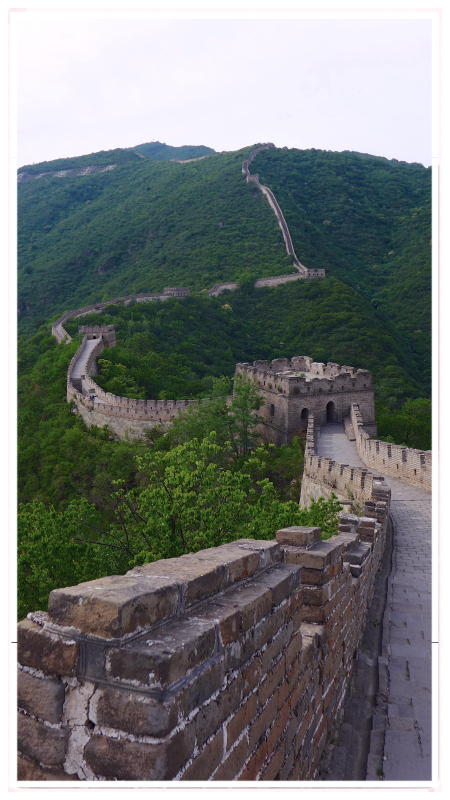 Notice we are in the same cable car that Bill Clinton rode in. 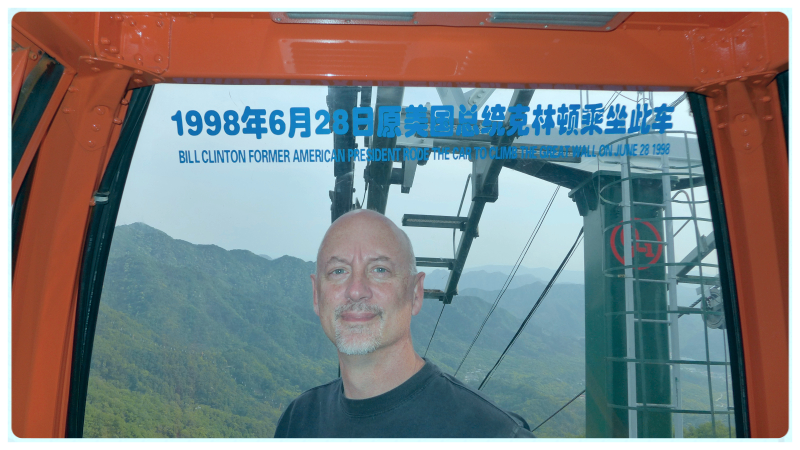 A few tips to visit the Great Wall of China:

They say that the best time to visit the Great Wall is spring (April - May) and autumn (September - November). Summer is the peak season with exhausting heat and popular sections get very crowded, and in winter it’s very cold with almost no crowds.  We were there the first week of June and the temperature was very pleasant and the crowds were minimal.  But I can only image how stunning it would be in the snow!

How do you get from Beijing to Mutianyu?  We hired a private car through our hotel.  Non - English speaker, but there really is nothing to see on the route so no talking is required.  It is a one and a half hour drive.

There is a lot of walking and climbing steps but you can take your time and really enjoy the amazing views. 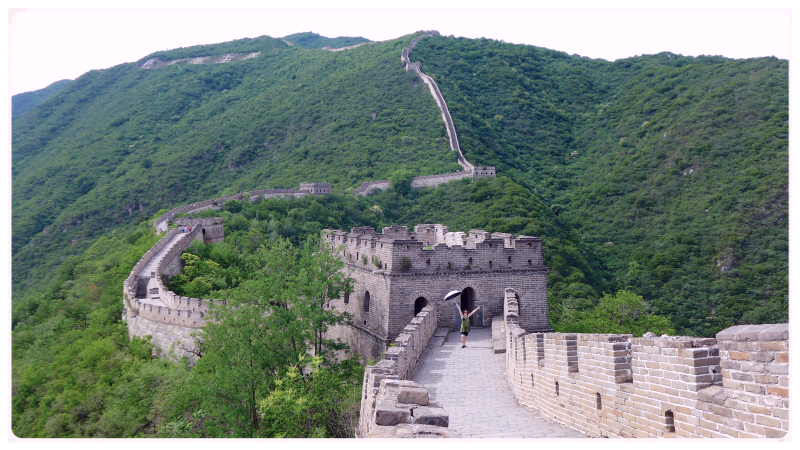 Lovely pictures and finally, you made it to the Great Wall! It is impressive. I've seen it in all 4 seasons and it is always beautiful, even when everything is barren around it in winter.

Your views of the Great Wall and the endless mountainous landscape are fantastic Cathy... We've all have seen views like these in magazines or documentaries and they are famous worldwide... but being there in person, walking on these old bricks and listening to its history, maybe, I guess, a grandiose, majestic, breathtaking and unforgettable experience...
Moreover, you were lucky to be quite alone on the wall, which is a quite uncommon and fortunate occurence...
As usual, you give us so much historical and geographical information and interesting anecdotes... this makes your post a very complete report about the Great Wall...

The pictures are AMAZING, something I will never see in person, but I really enjoyed seeing it and even more, hearing about it!

LOL ~ And what did Don's surgeon have to say about his 'adventure" so soon post-op???