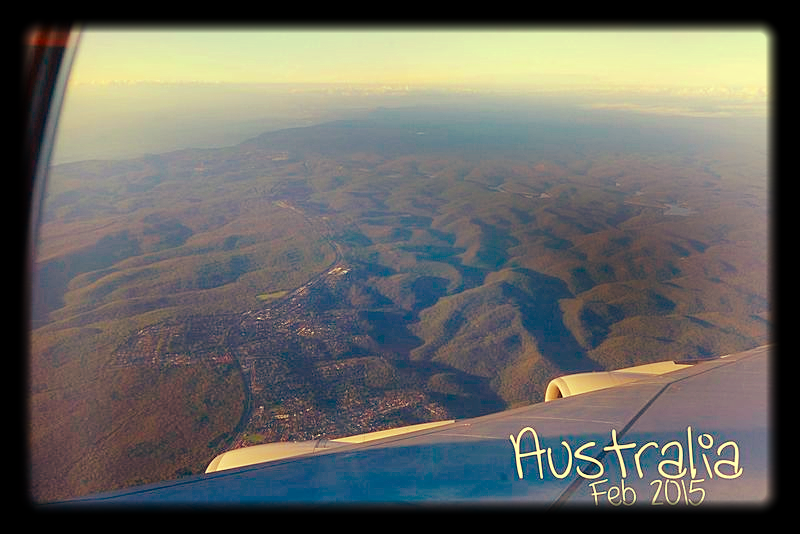 Where in the world is Canberra?  And why did we pick this city?

Canberra is 170 miles south-west of Sydney.  It is actually the capital of Australia and where their central government offices are located.  Canberra is Australia's largest inland city and the eighth-largest city overall.   D had business there.

We flew into Sydney and took a train to Canberra for two days, then returned to Sydney and spent the weekend.  There was beautiful scenery along the way, much like the rural parts of the United States. 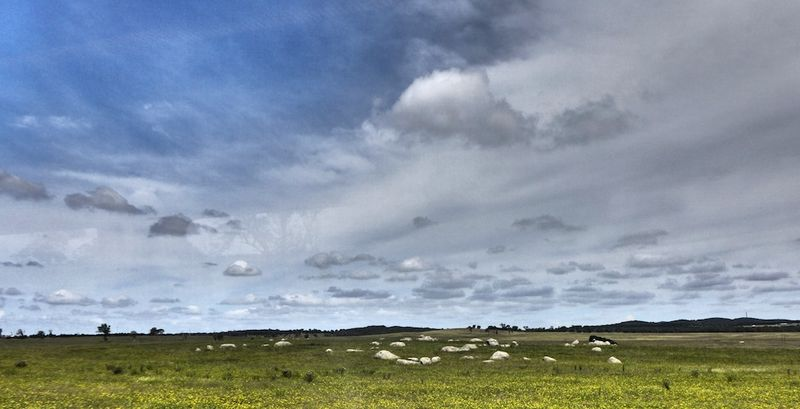 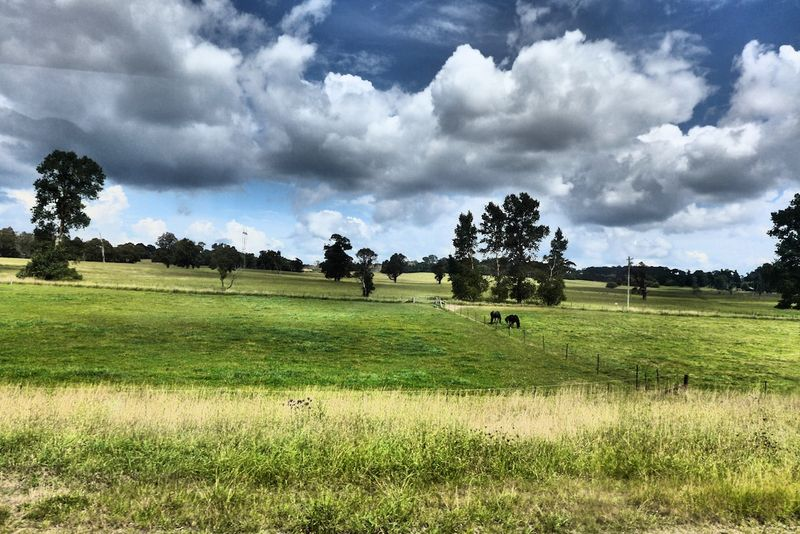 We really enjoyed our short visit to Canberra.  It seemed to be a very livable city.  And the very best part was their local residents.... kangaroos!!  I really wanted to see a kangaroo in the wild (on the bucket list) and the further north you go, the better chance you have.

Did we see them? 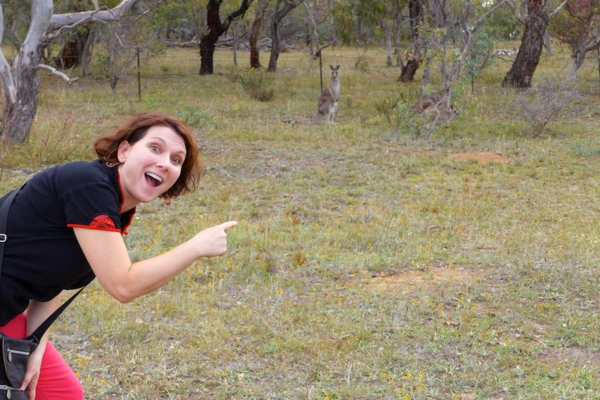 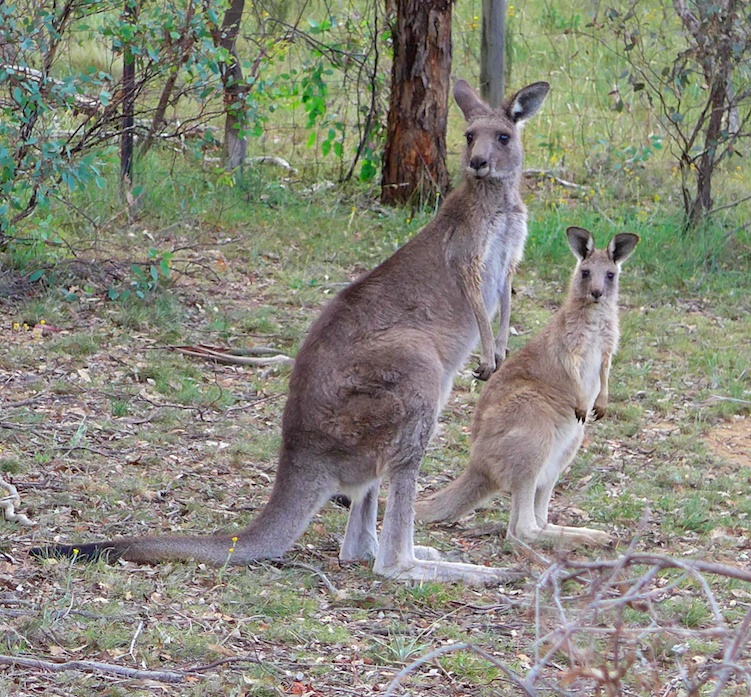 But it would have been impossible to find them without an experienced kangaroo tracker!  D's Australian co-worker Nick was kind enough to take us out roo-hunting (cameras only)!

You are probably thinking ...kangaroos are big, why was it so difficult?  I'll let you try... look at the photo below and tell me if you see any kangaroos. 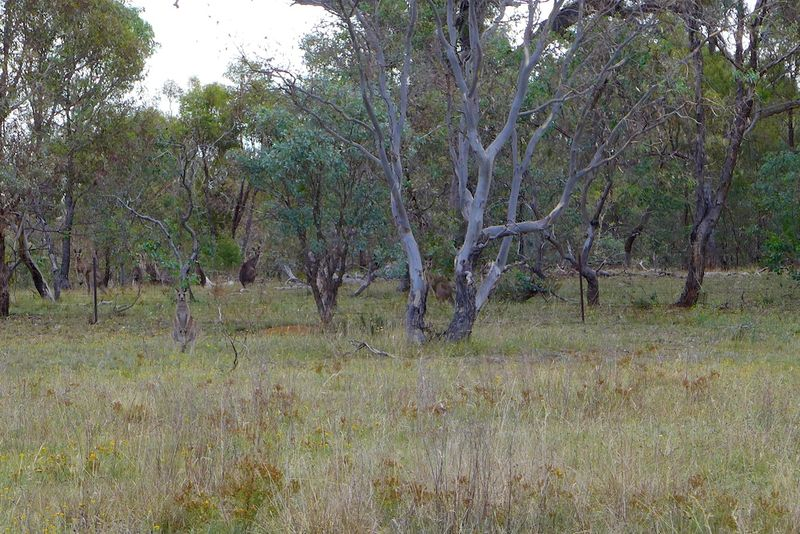 If you counted 9 you are correct!

Kangaroos are fascinating to watch.  They are the only large animals that hop as a primary means of movement.  They are social and live in groups called a mob, a herd, or a troop.  Kangaroos in a mob will groom each other and protect each other from danger.  If a kangaroo suspects there is danger in the area, it will stomp its foot on the ground to alert others. 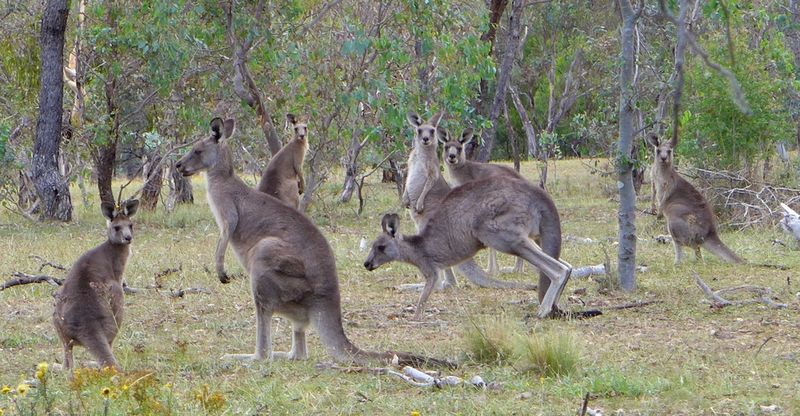 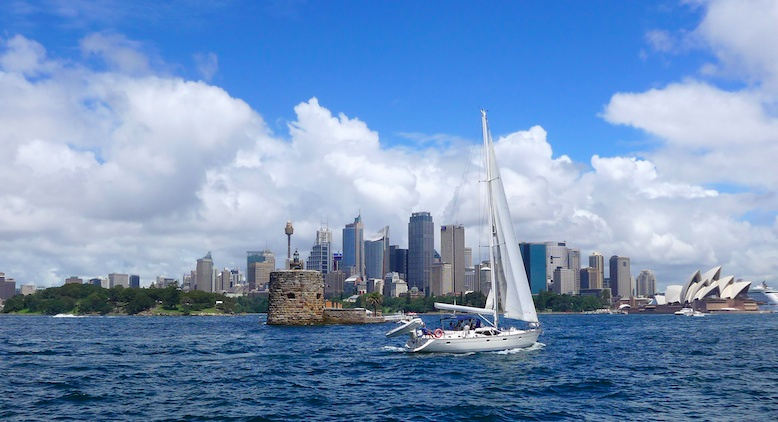 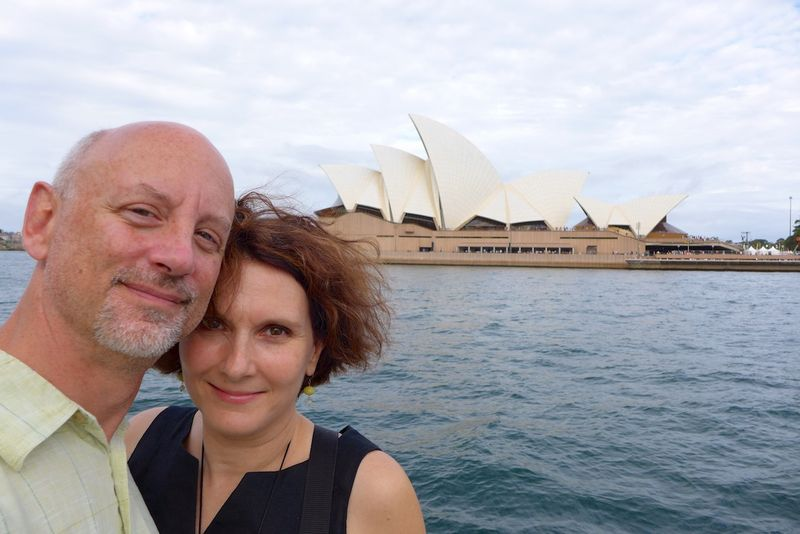 The iconic Sydney Opera House, built in 1973, is a UNESCO World Heritage Site. 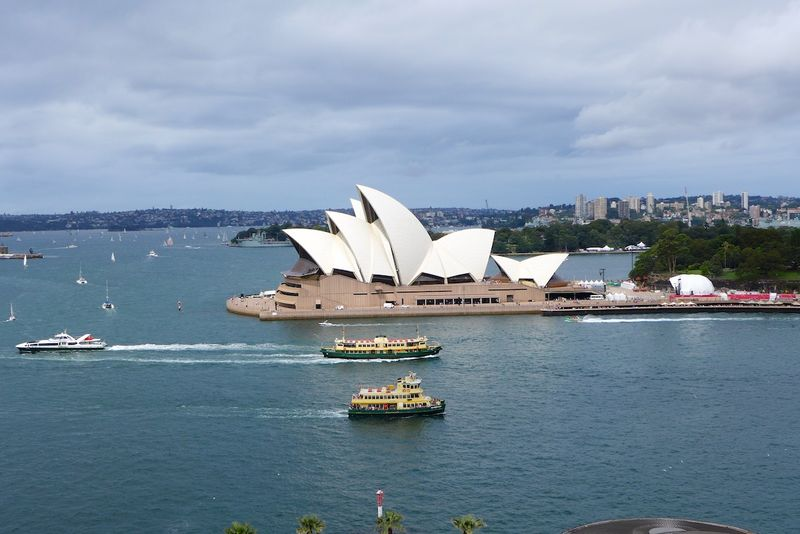 I found it interesting that the architect was Danish and not Australian. When I researched this I found that an international design competition was held to find an architect for the structure. The city received 233 entries, from 32 countries. The criteria specified a large hall seating 3,000 and a small hall for 1,200 people, each to be designed for cultural programs. 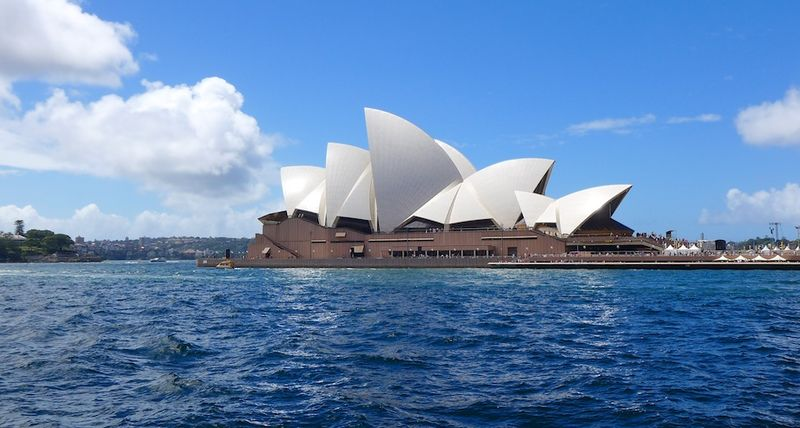 According to legend, the design was originally rejected, and at the last minute it was pulled out and declared the winner.  Today, this beautiful building is not only the “symbol” for Sydney, but the whole country. 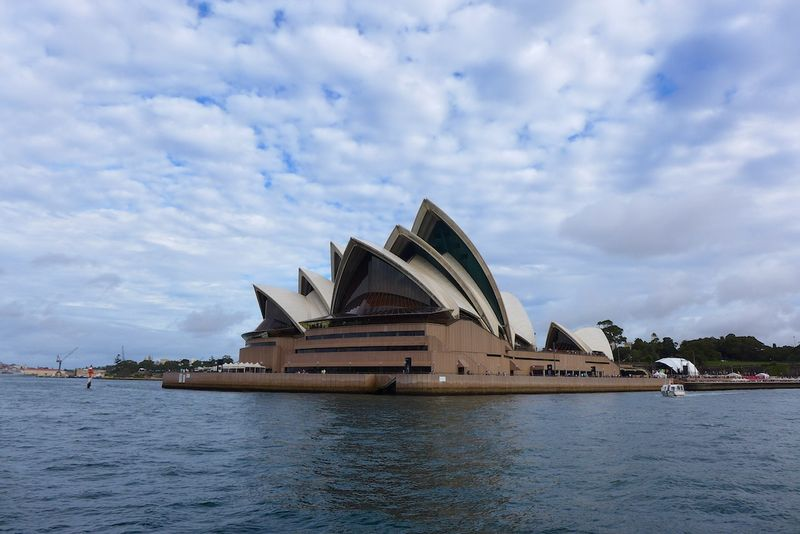 Viewing the city from the Sydney Harbour Bridge. Port Jackson, also called Sydney Harbour, is an inlet of the Tasman Sea (part of the South Pacific Ocean).  It was very busy with sailboats on the weekend. We caught several Ferries and toured the waterways.  They provide you with a beautiful view of the Opera house and the city skyline.  We got off on the famous Manly Beach, had lunch, and walked along the beach. Around town and our hotel

We lucked out on the hotel room we were given.  It was a suite with a large deck with a fantastic view of the city.  What was even more exciting was we used hotel points and stayed for free! 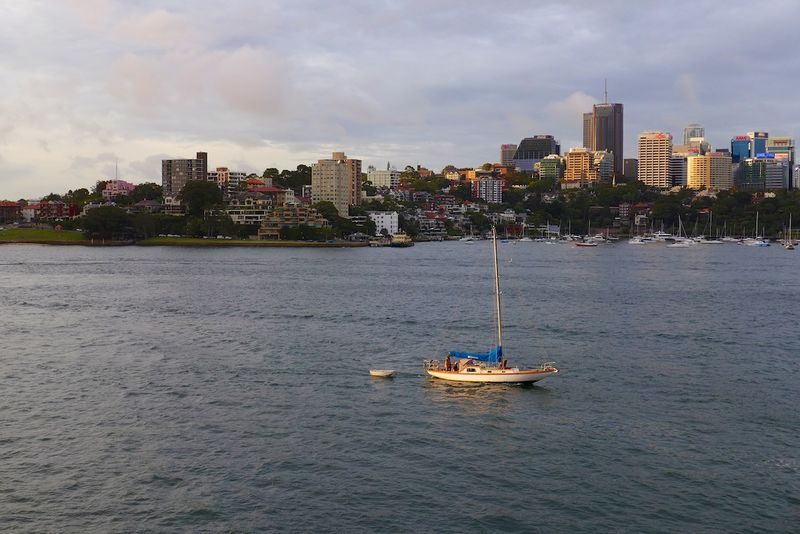 Dining at a waterfront table at the local restaurants was the "trendy" thing to do, but it was very difficult to get reservations.  We had such a fantastic view, we opted for dinner on our private deck and enjoyed  a carryout cheese and meat platter and a bottle of wine. 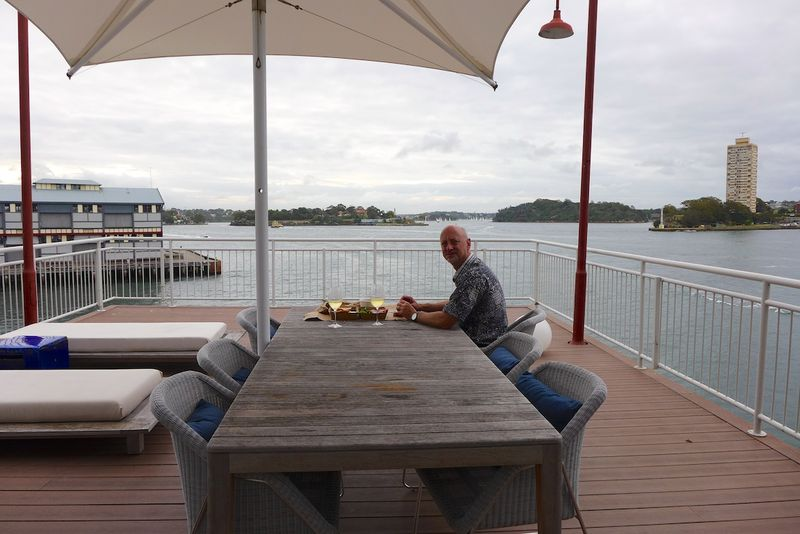 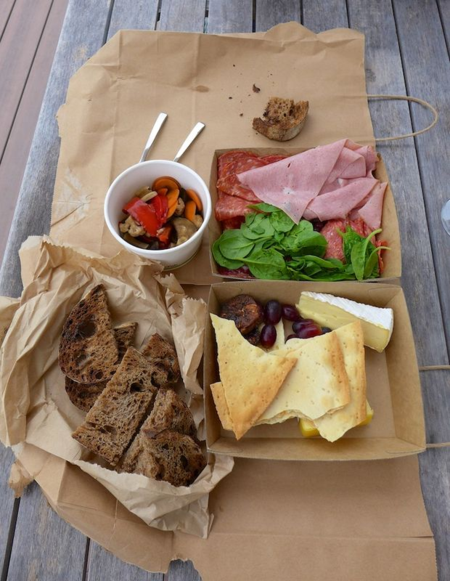 And the nighttime view did not disappoint! 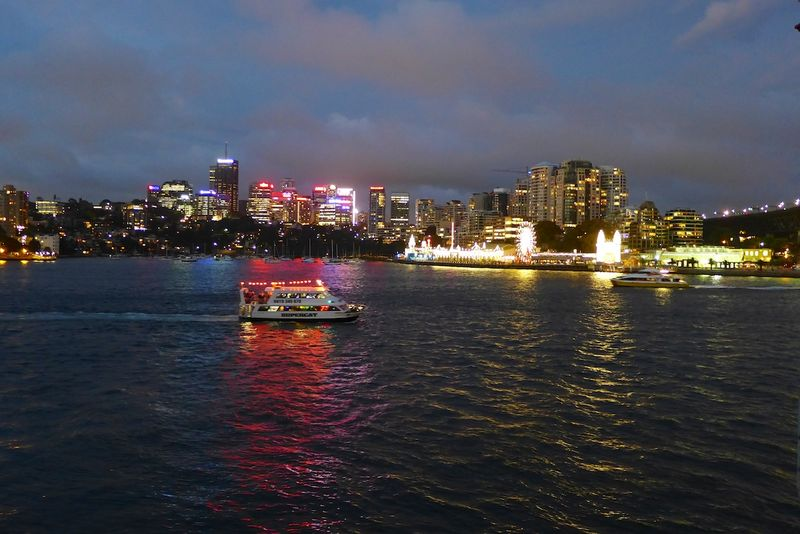 Harry De Wheels, started out as a simple caravan cafe during the years of the depression (it is over 70 years old) and has developed into somewhat of a Sydney Icon.  They serve meat pies with mushy peas - delicious! 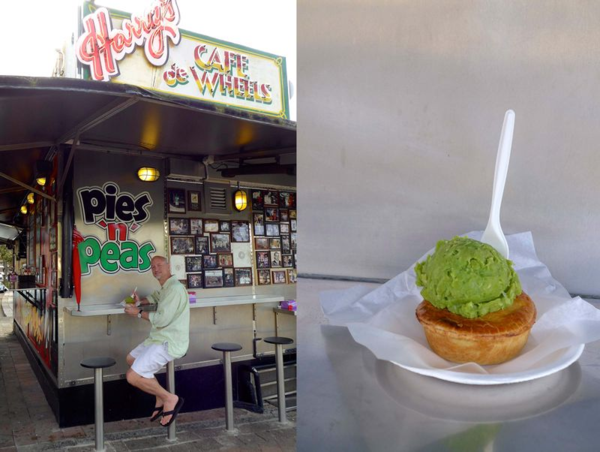 We also enjoyed a black widow hamburger with the famous charcoal bun.  Let's just say it was different. 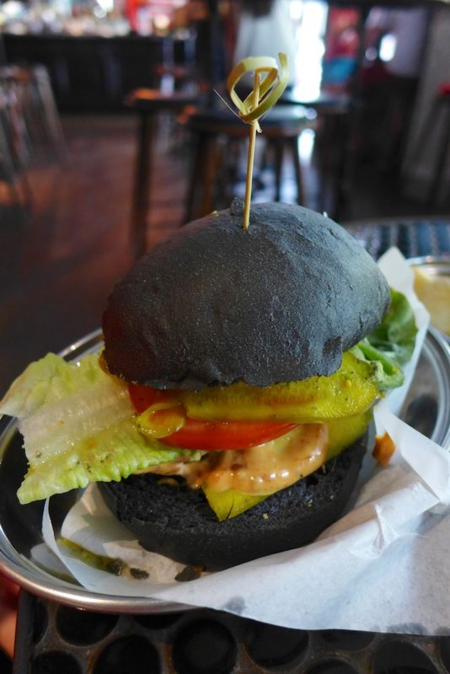 A few interesting sights around town...

And this guy is a white ibis.  They are like pigeons in the US and are all over the city.  The locals loving call them trash vultures. 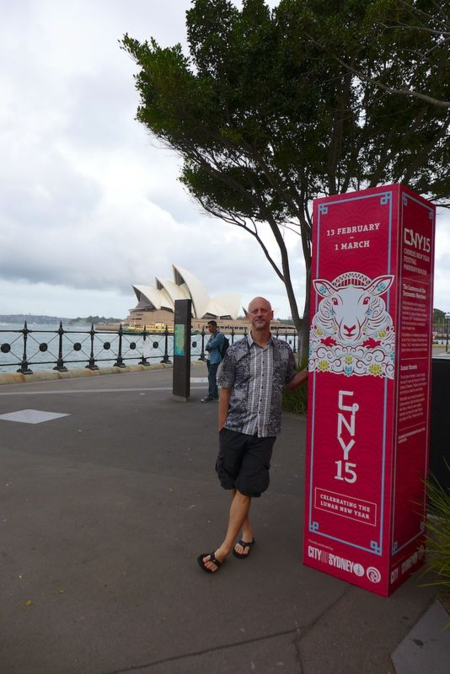 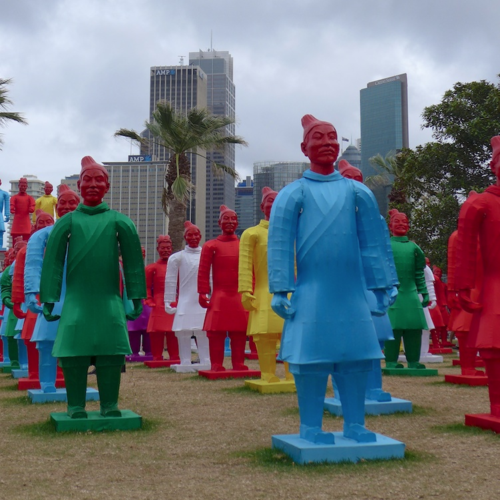 It was a really fun parade with local groups participating and the best part it was free!  In Singapore the parade is very pricey and almost impossible to get tickets for. 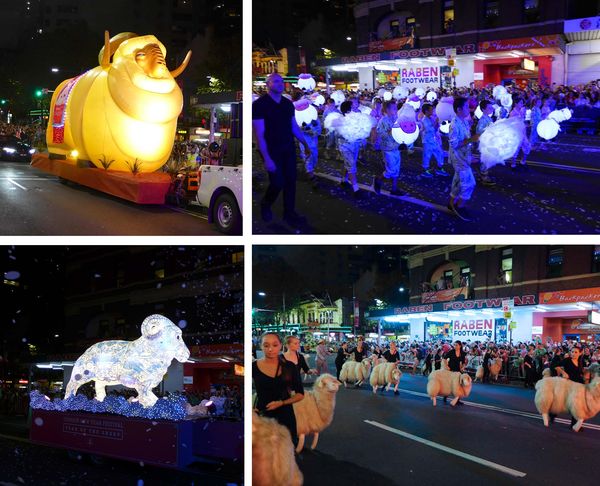 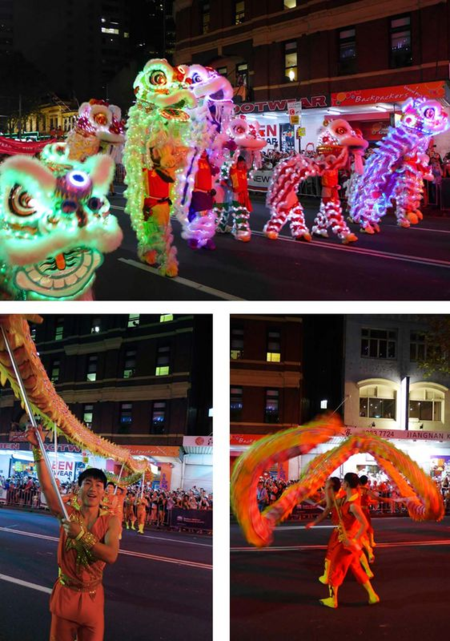 It was a fast but fun trip to Sydney.  Another area we think would be a great place to live.

Thanks for the link to this site. Really enjoyed it. We have family in Sydney and also in Queensland. Have seen a tape that the Gaither's did at the opera house there. Loved the pictures of the kangaroo's and the birds. I love painting birds and animals. Nice of you to do the blog, so those of us who may never be there we can still enjoy. I found it interesting that you stated in your blog that some places charge for a parade.

kangaroo hopper
A drunk person who cannot stand up by them selves and hops from person to person in order to stay up
http://www.urbandictionary.com/define.php?term=kangaroo+hopper

Love the fresh look of the blog! Wonderful images of you both! Thanks for sharing all about the kangaroos...never knew they did the foot stomping thing! Keep sharing...we learn so much from you!

Great pictures as always, Cathy, with a lot to learn about a country which is so far away from Europe!
I loved your kangaroos pictures and how they hide in the landscape as chameleons... They look so cute and funny. You captured them so beautifully and seemed to have much fun being so close to those strange animals.
Thank you for sharing those wonderful views of Sidney Harbour and the worldly-famous Opera, it's really a work of art! Thank you for all the details you share with us about the way it was built.
It must have been nice to be in Sydney during Chinese New Year and all its celebrations... it wasn't so exotic for you though, at that time...

I loved learning about the kangaroos. I only spotted ONE in that picture. I did not realize a building so modern would be a world heritage site. You always have so many interesting factoids in your post and I am happy to have you blogging again!
Love your new banner, too.

You got some great non-trad. shots of the opera house ~ did you have a chance to go inside?

And, of course, the pix were wonderful too!