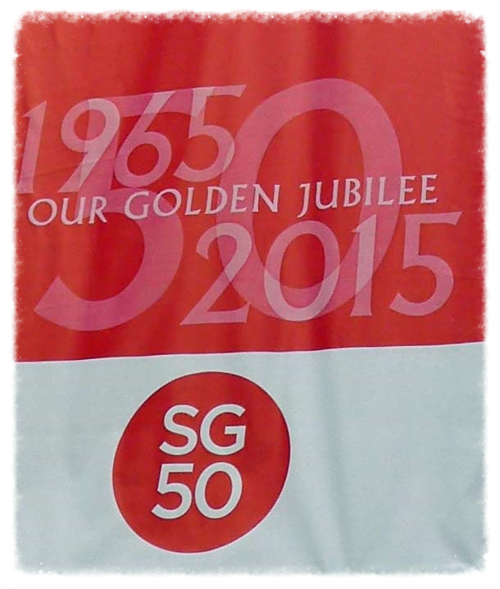 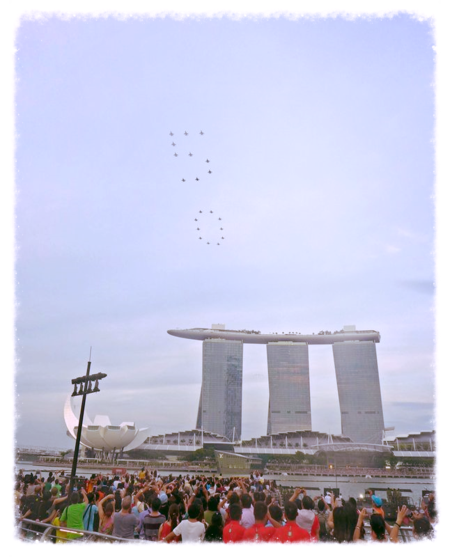 Today, August 9th, marks Singapore’s 50th Birthday as a nation, and Singaporeans are celebrating BIG!!  The president declared August 7 a public holiday making it a four-day weekend. All over the city there are red and white decorations, carnivals, concerts, fireworks, special T-shirts, even a sardine can with a wish!

I wanted to share a few of the photos I captured over the last few days of the celebrations.... 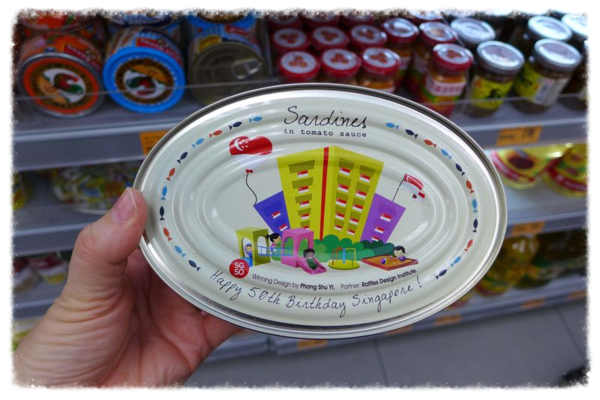 We went to the practice sessions for the air show.

The highlight was the formation of 20 planes in the shape of a "50". 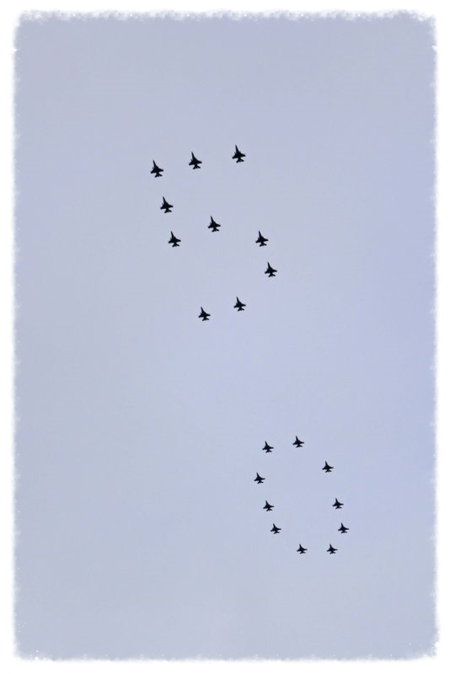 A little history on Singapore...

On 9 August 1965, Singapore separated from Malaysia to become an independent and sovereign state. 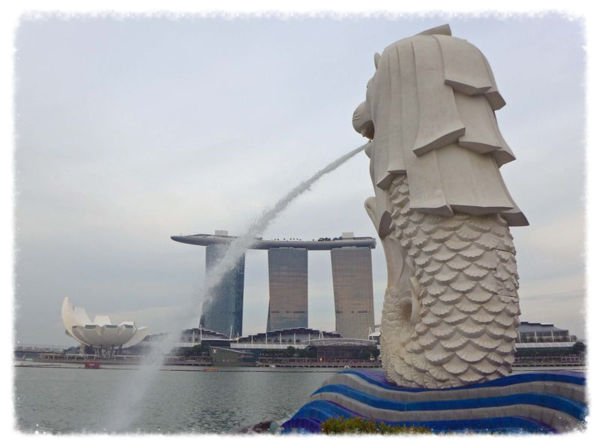 In less than 50 years, this small country went from third-world to first, and has become one of the richest nations in the world.  Amazingly, 1 in 6 Singaporeans are millionaires and 90 percent own their own home. 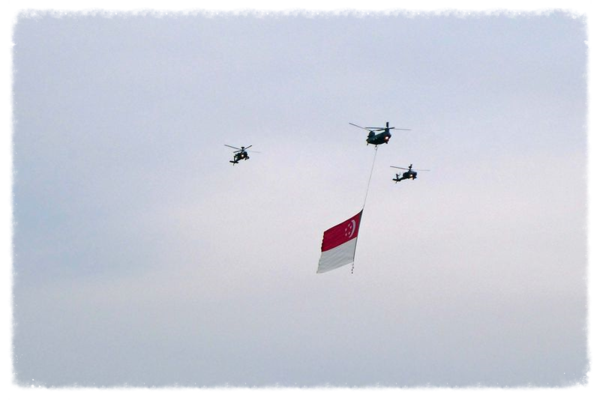 Much of Singapore’s success can be attributed its first prime minister Lee Kuan Yew, who just passed away in March of this year.   So sad he did not live to see the 50th celebration. 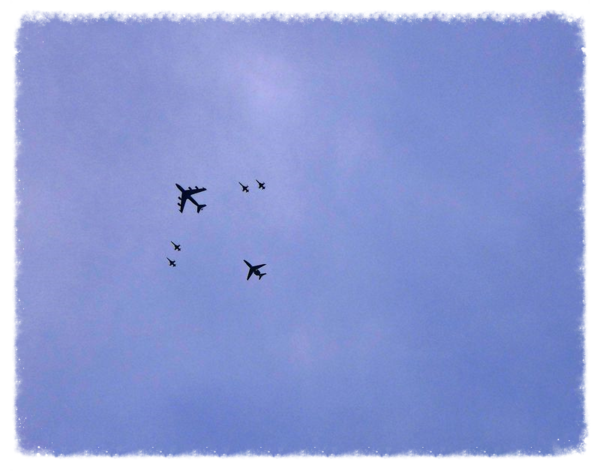 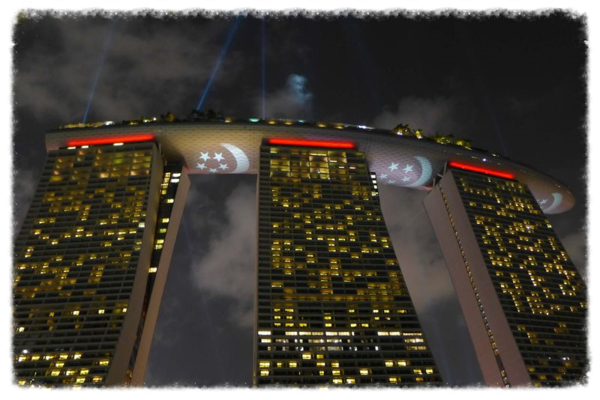 I posted these facts about Singapore on the blog when we first moved here and thought it would be fun to share again – with a few comments (in red) after living here for almost four years.

1)  Singapore is a city and a country.  It is made up of one main island and 63 small islands (most are uninhabited). 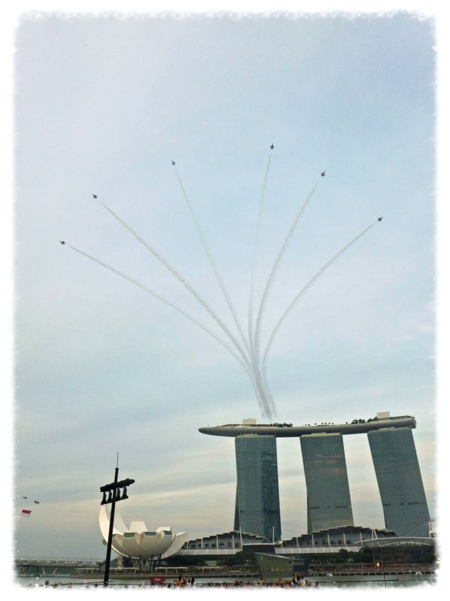 2)  The country is 240 sq miles.  Slightly smaller than New York City, over five million people live here.  Apart from Monaco, it is the most densely populated country in the world. 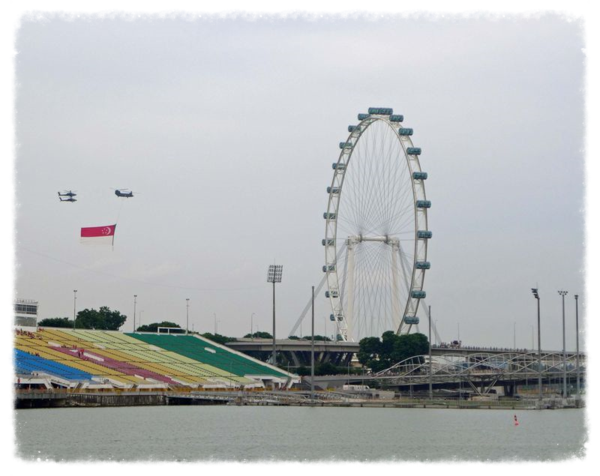 3)  It is a very prosperous country with only 2% unemployment. 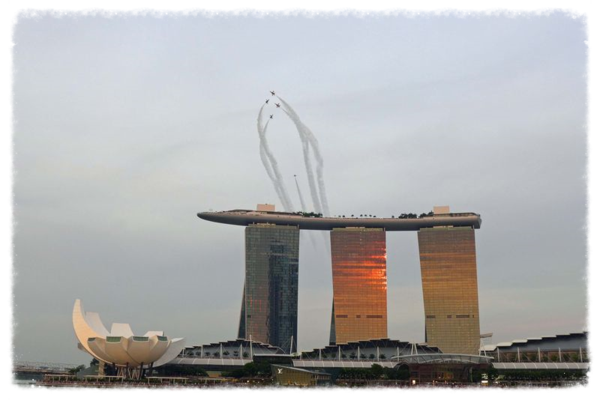 5)  It has a tropical rain forest climate with no distinct season.  It rains almost everyday.  The temperatures ranges from 83 to 90 degrees with the average humidity around 84% - which means hot hot hot.

This is true, it does rain almost every day around 3:00. 6)  English is one of the four official languages along with Chinese, Malay, and Tamil.  English is also considered the first language.

It is very easy to live in Singapore as most people do speak English.  The sign below is in Bahasa.  Majulah Singapura means "Onward Singapore" which was later adopted as their national anthem. The "little" red dot on the back of the bus was one of the themes for the 50th celebration.  The logo celebrates the Singaporean spirit – signifying that their dreams are not limited by the physical size of the "little" island nation. 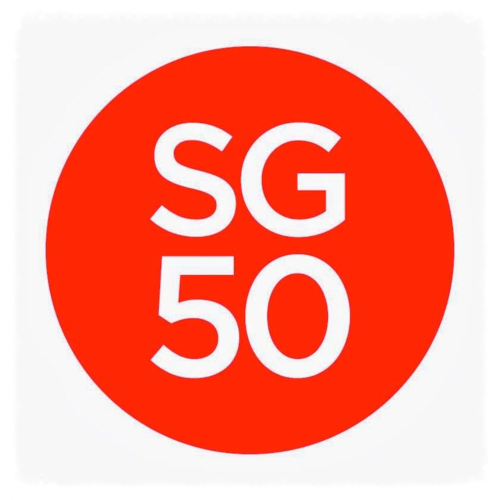 7)  There is a 12-hour time difference between Singapore and the US.  They do not practice daylight savings so it is 13 hours in the winter. 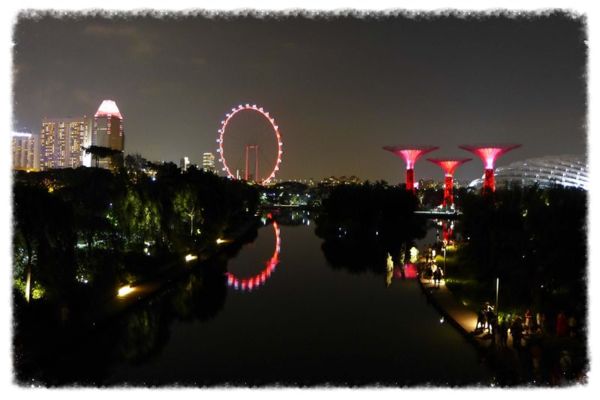 8)  They drive on the right hand side (opposite of the US!).  All cars must be  less than 10 years old and are removed or destroyed when they reach 10 years.

But even more interesting  -  you need to buy a coupon to drive a car in Singapore - they auction for around $70,000.  This does NOT include the price of the car or insurance.  The coupon also has a 10-year expiration. 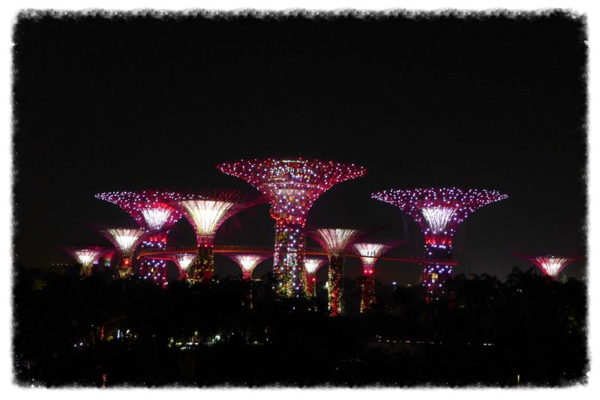 Last night we went to see the Super-Tree 50th celebration light show at Gardens By The Bay.  It was so pretty. 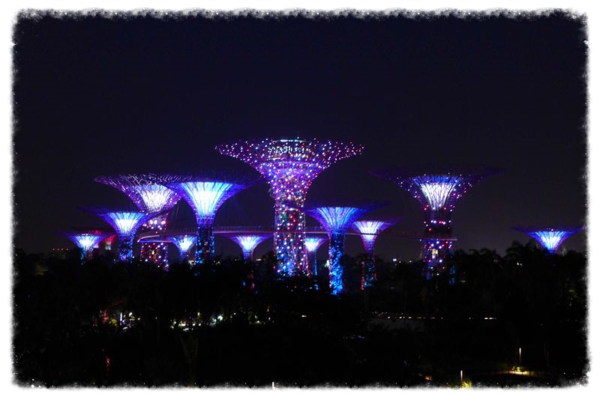 9)  It is one of the cleanest cities in the world and you can be arrested for spitting, littering, or chewing gum! 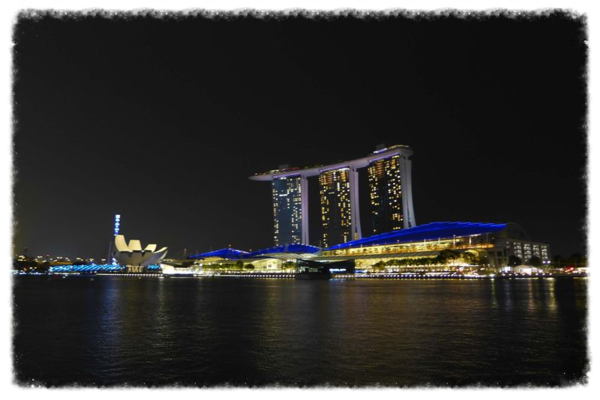 10)  The crime rate is super low - making it one of the safest cities in the world.

True.  I see woman leave their purses on the hawker stand tables to secure the table while they go to buy their food.  And the sign below is real... I am not sure if it was a child cheating on a test, a man cheating in checkers, or a man cheating on his wife... but cheating is a crime! 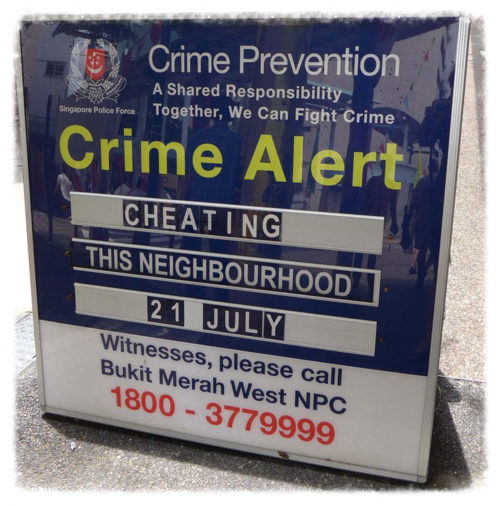 11)  Singapore is a foodie's dream.  It has been referred to as the food capital of the world with a mix of so many cultures and cuisines {yeah}. 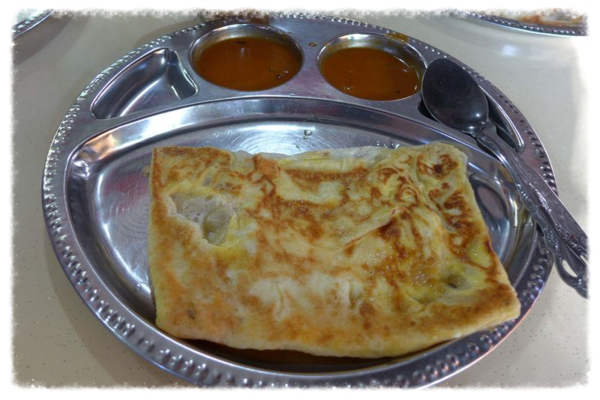 and XLBs (xou long bao) soup dumplings - little pillow of heaven.  You bite into it and the soup bursts into your mouth. 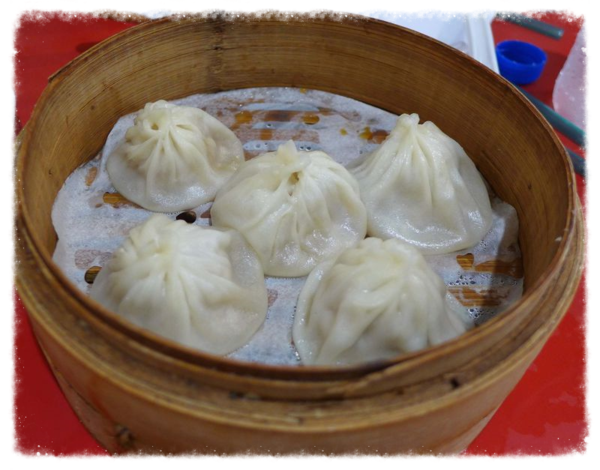 12)  It has one of the best health care systems in the world and the best water.

The doctors are excellent here.  You can get an appointment fast with top-rated doctors and the doctors spend quality time with you.  They seem to really want to get to know you and help you.  We will miss this. 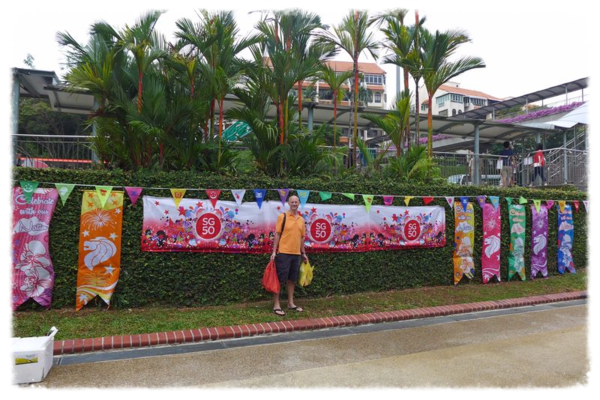 From a 2015 report - Singapore is the world's most expensive city, according to an index compiled by the Economist Intelligence Unit.  It comes in ahead of Paris, Oslo, Zurich and London. 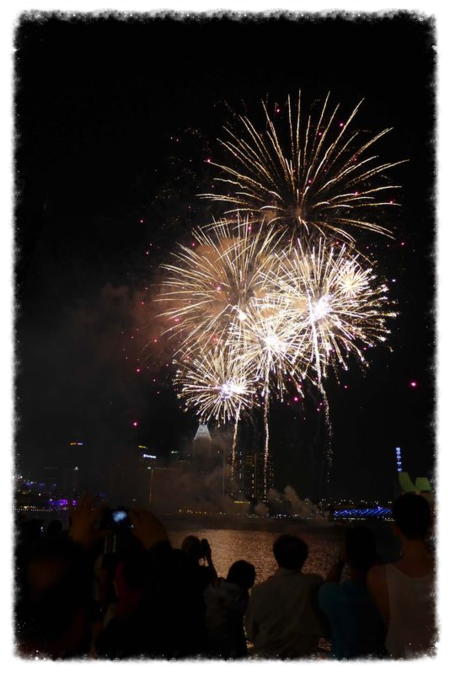 14)  They say Christmas is spectacular - guess I will be able to confirm this!

Confirmed!  The decorations are more spectacular than in the US.  A bit unusual given most Singaporeans do not celebrate Christmas!  The photo below was from last night at Garden's By The Bay. 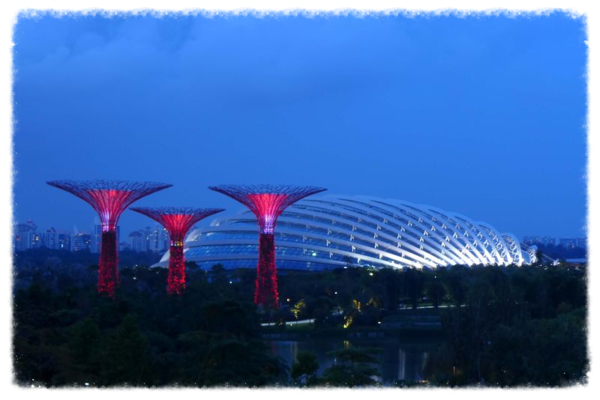 But there is something to be said about having a wardrobe you can wear 365 days a year and NEVER having to stop and think... do I need to carry a coat today?!

When we board that plane on Thursday to head back to the United States I will cry.  Thank you Singapore!  We have come to love this wonderful island that we have called home for the last four years.  We have a made so many wonderful friends - Singaporeans, expats from other countries, and some folks from our own backyard at the US embassy!  We will miss all of you and we hope that our paths will one day cross again.

All the best for your next stage of life. I have been enjoying your blogging in Singapore and Asian countries a lot.

I have so enjoyed reading about your travels, and about the celebration (and farewell) for Singapore.
What a great time to have been there!

Hi Cathy!
I imagine how sad it can be to leave this beautiful country which you've been discovering day after day and enjoying for so many reasons during the last 4 years...
Wishing you the best for this new step back in your homeland...
Thank you for sharing the pictures of Singapore's 50th birthday, and thank you for sharing your love for this country... it really looks like a wonderful place to live in!
I understand your tears, tears of sadness for leaving such a heavenly place, such lovely friends, such an easy life in the tropics... but also tears of thankfulness for this amazing opportunity you had to stay 4 years there and make a lot of travels from there to so many south-asian countries, to discover another way-of-life, different forms of art, of cooking, of crafts... You come back home richer than when you arrived here of so many discoveries, so many stories, you got to meet so many amazing people in all the countries you've been visiting and it was such a human experience...
I'll have an empathic thought for you next Tuesday while you are in the plane... So many people are looking forward to seeing you again and I'm sure you'll pour tears of joy when you see the smiles on your relatives' faces at the airport!