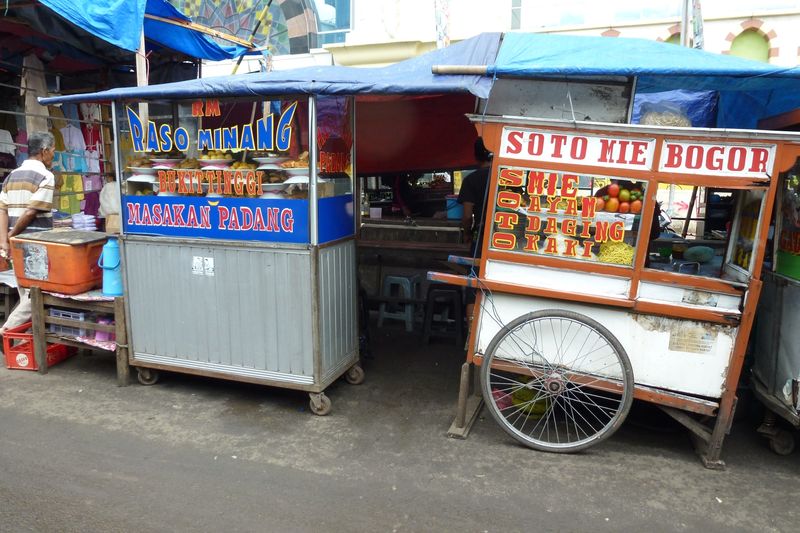 Jakarta is a fascinating city.  I know I say this about many places we visit – but each one brings unique experiences for us.  It is a dirty city (both air and ground) with very few historical sights to see.  But if you scratch the surface, you can really enjoy this city as we did!  This was D’s 5th visit to Jakarta; but my first. 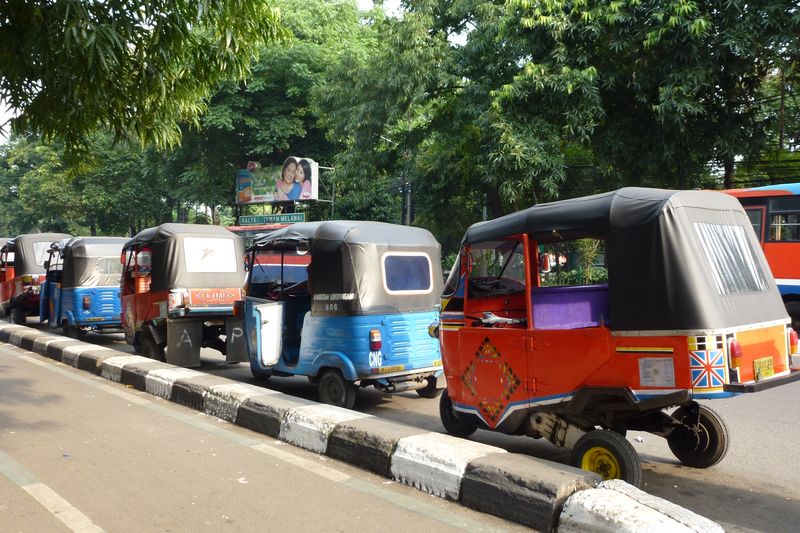 Jakarta is located on the island of Java.  It is the capital of Indonesia and largest city in the country.  We stayed in Central Jakarta - the heart of the government and financial district.  I was surprised at the modern high-rise buildings and high-end shopping. 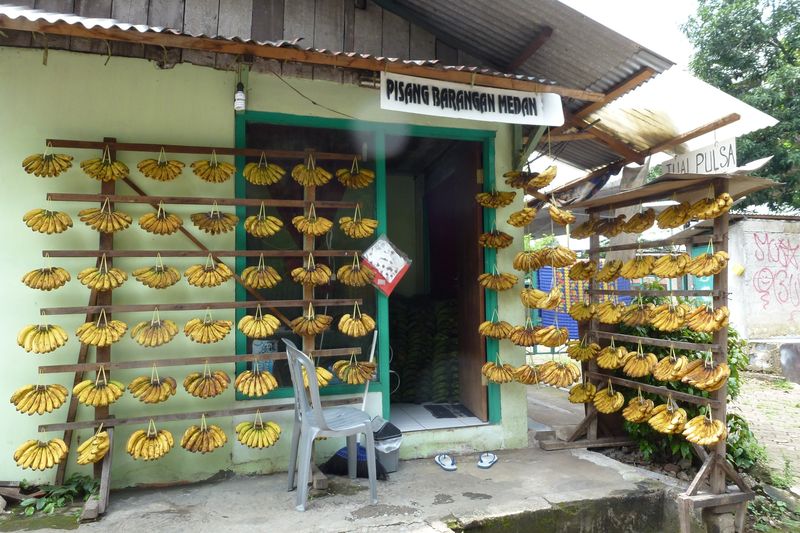 Jakarta has the extremely rich and the extremely poor, all blending together - with Gucci on one side of the street and begging street children on the other.  I am guessing these two are not too poor as the one has braces. They were so cute.  They asked me to take their photo, but then the one on the right became very shy. 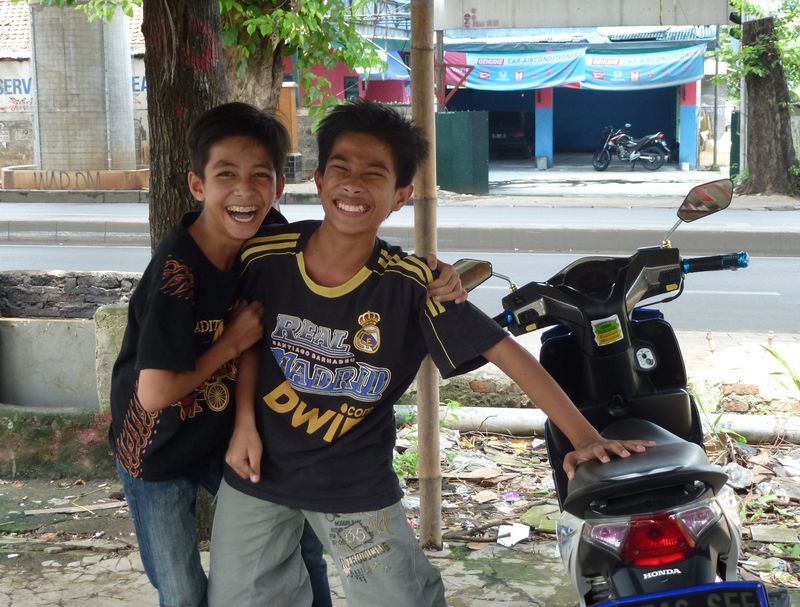 Indonesia is the fourth largest country in the world (by population) and world’s largest Muslim country.  You can hear the call to prayer several times a day.  Most of the women do cover their heads with hijabs.

Very few people speak English so D had to navigate us several times in the taxi using his blackberry map.  Despite not speaking English, they were always ready to help us as we wandered about. 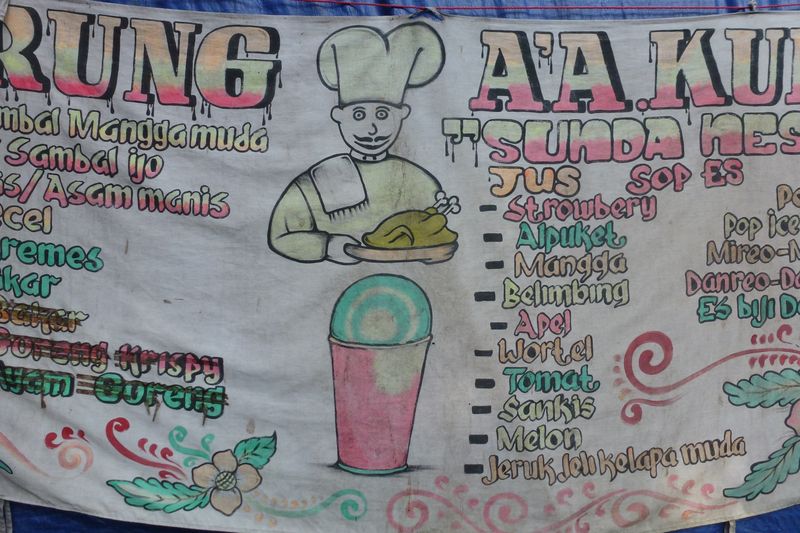 Sunday was our spa day.  We went to very posh spa for couples therapy.  I had a facial, and a hand-and-foot massage.  D had a full-body massage.  They lasted 1.5 hours and were wonderful.  Total price: About $75.  Then we went to Koi Kemang for a lovely brunch. 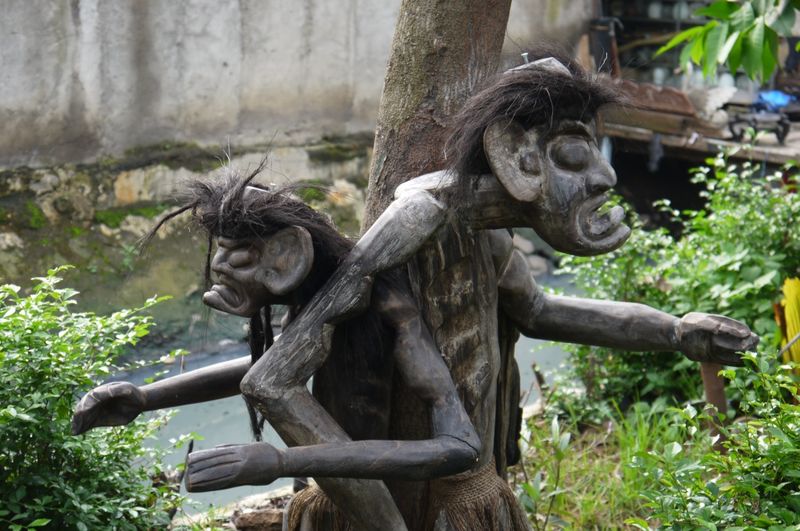 We visited the textile museum and learned how to make Batik.  D was a good sport and made one too.  It was pouring down rain, so it was relaxing to just sit and take a break.  It is easy to do, but very hard to do well!  You can see more about our creations here. 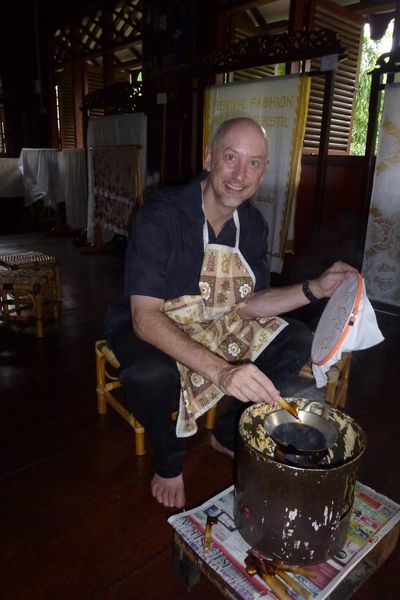 Traffic is a nightmare in Jakarta.  We think it is even worse than Bangkok. One afternoon around 2:30 it took us one hour and ten minutes to go less than 3 miles.  It was pouring down rain, otherwise we probably would have walked. 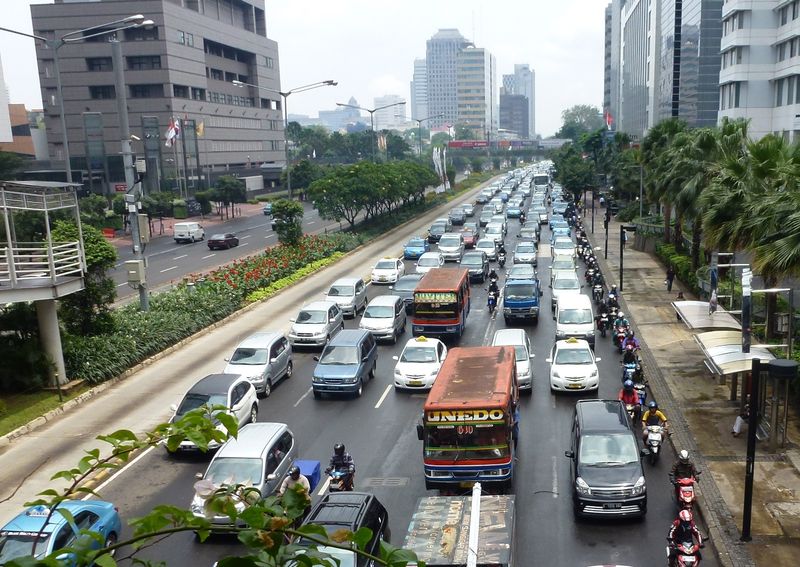 D dragged me on the VERY local bus several times as they move much faster than the taxis.  And they are very inexpensive, 35 cents to go to most locations. 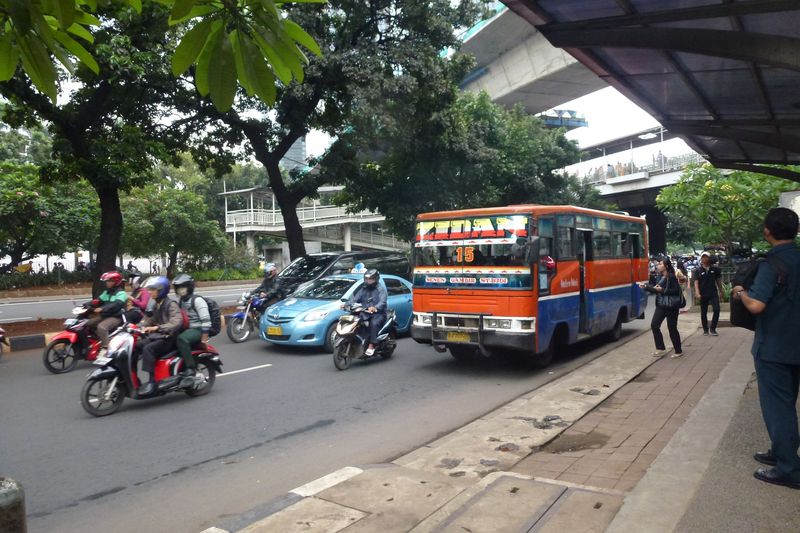 The interesting thing is that women ride in the front of the bus... no men allowed!  I was curious about this so I googled it and found that this was in response to reports of sexual harassment in overcrowded buses and stations.  The  Governor is considering making some buses exclusively for female passengers this year. 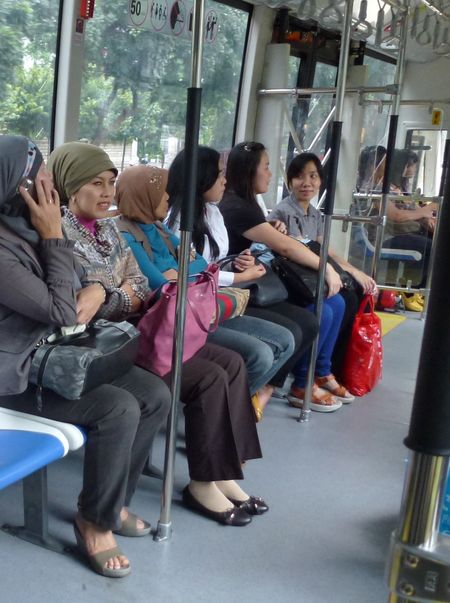 We wandered into Giyanti Coffee Roastery and had an excellent cup of coffee.  Hendrik and his sweet wife just opened it a few months ago.  He knows quite a bit about coffees, and he is perfectionist as well, as evidenced when he "pulled" our cups. 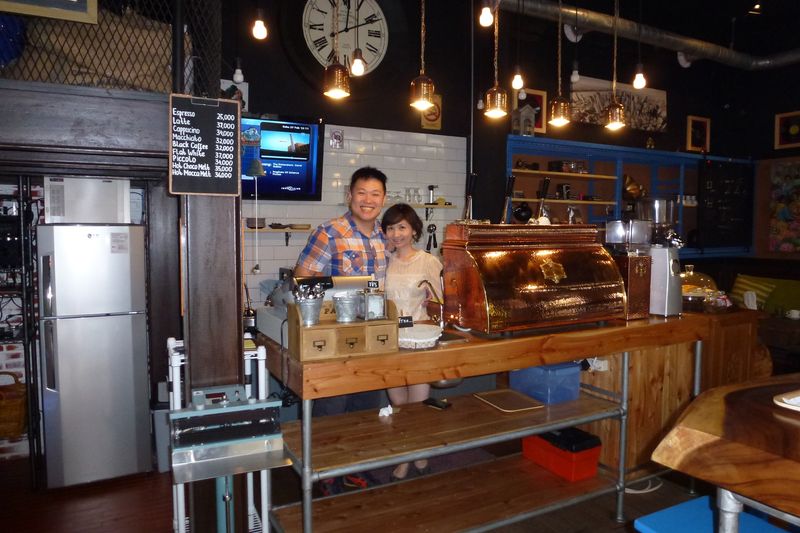 Indonesia is the 4th largest coffee producer in the world.  At Giyanti they roast their own beans.  We bought two bags to bring home and it really is exceptional coffee. 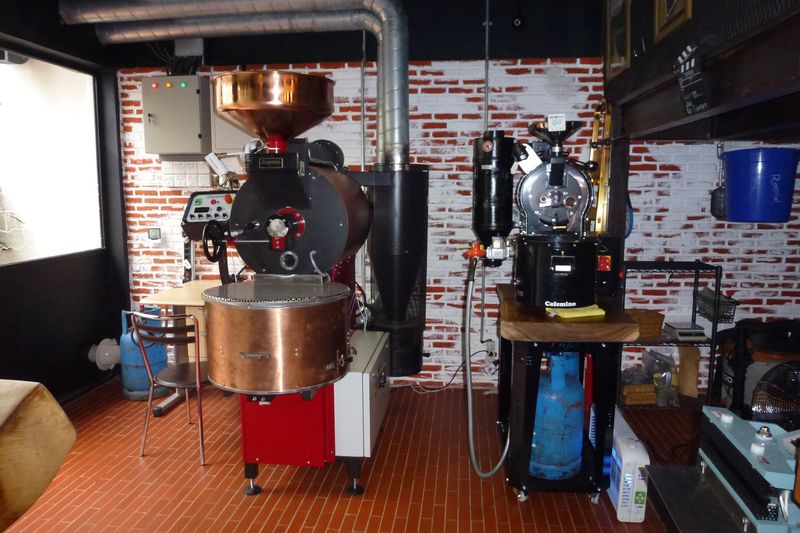 It is a modern cafe with a great feel.  They also have a very comfy outdoor seating area.  The cafe is directly across from a row of antique shops so it is a fun area to visit.  We went back a second time we liked it so much. 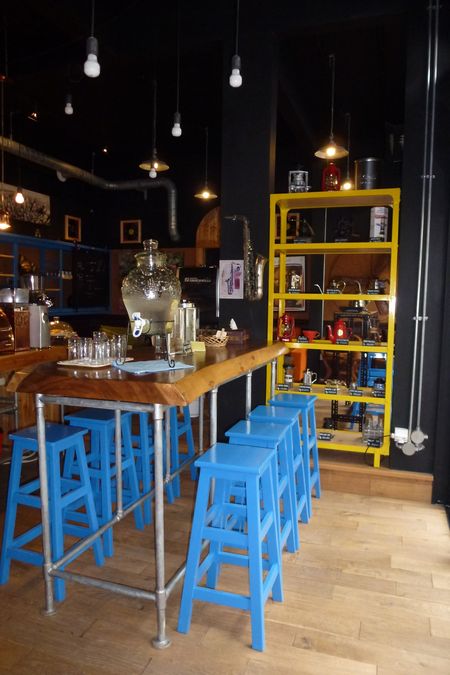 The biggest wholesale market in SE Asia, Tanah Abang Textile Market, is in Jakarta.  We went for a few hours and had so many bags we had to leave!  And we only scratched the surface of this gigantic market.  Tanah Abang is said to be 300 years ago and it started as an animal market.  We did see goats on one side street waking to the market! 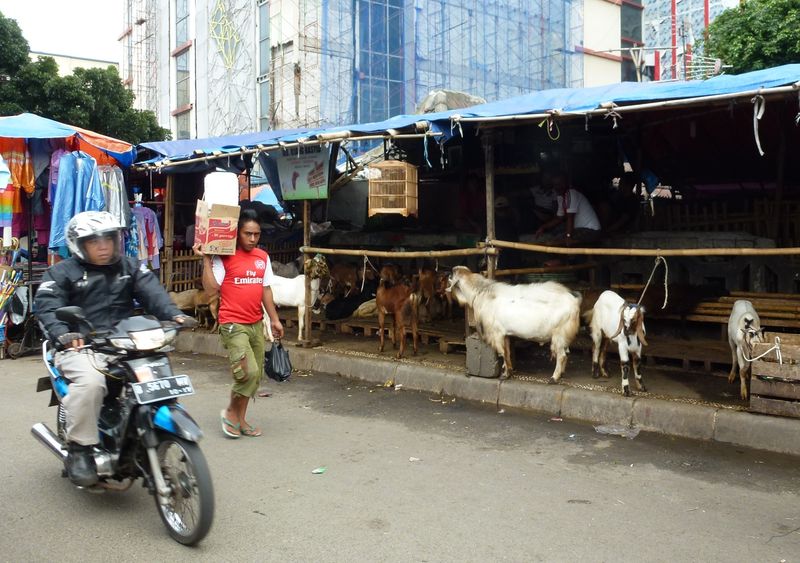 Stalls sell mainly textiles, clothes, shoes, and purses; but you could find almost anything.  The market is in a huge building but vendors sell on the the sidewalks and in the road. 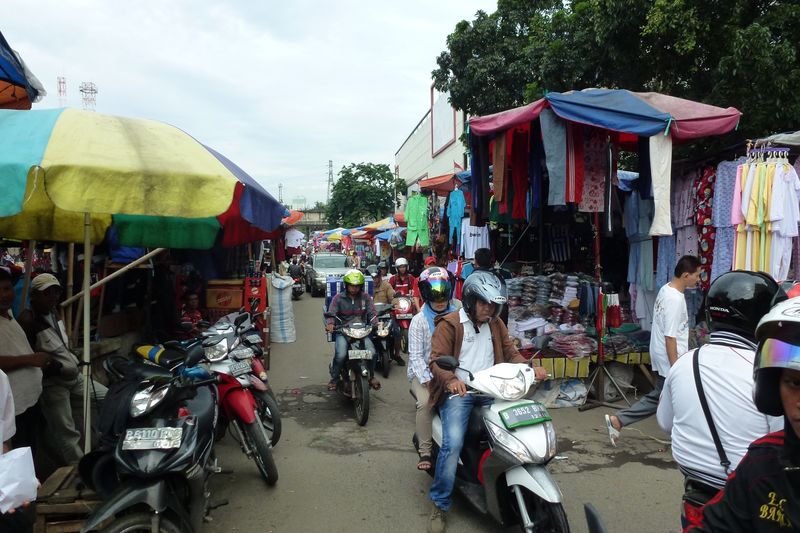 Even though is was wholesale, most vendors would sell to us.  A few had a four or five piece minimum.  Me trying on a  batik shirt... 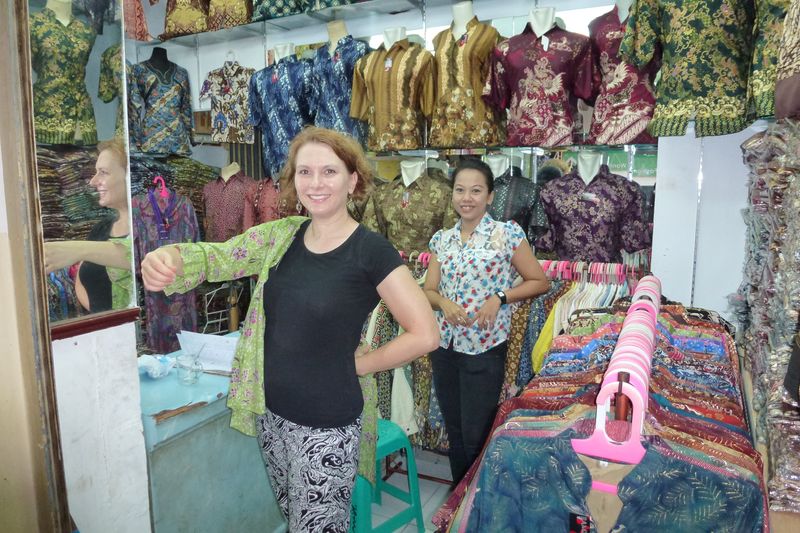 But the usual happened.... a large was too small!  A girl could really get a complex living in the land of the tiny!  Okay - we made a fun goofy purchase... matching shirts!!  Look closely at the red ones on the right hand side of the photo (my head is blocking the corner of the man's shirt).  Those are the ones! Oh what a cute Christmas photo this will make (gag)!! 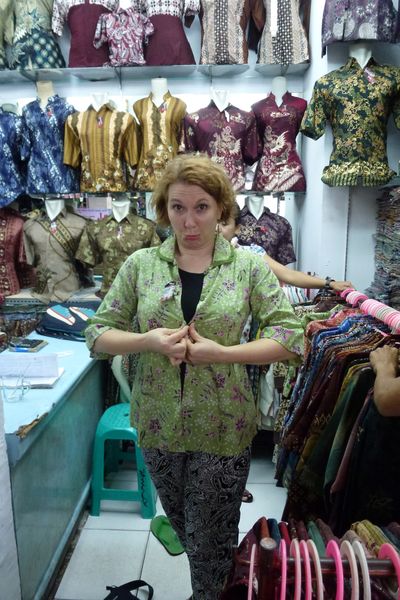 We had a great time in Jakarta and I will definatiely go back!