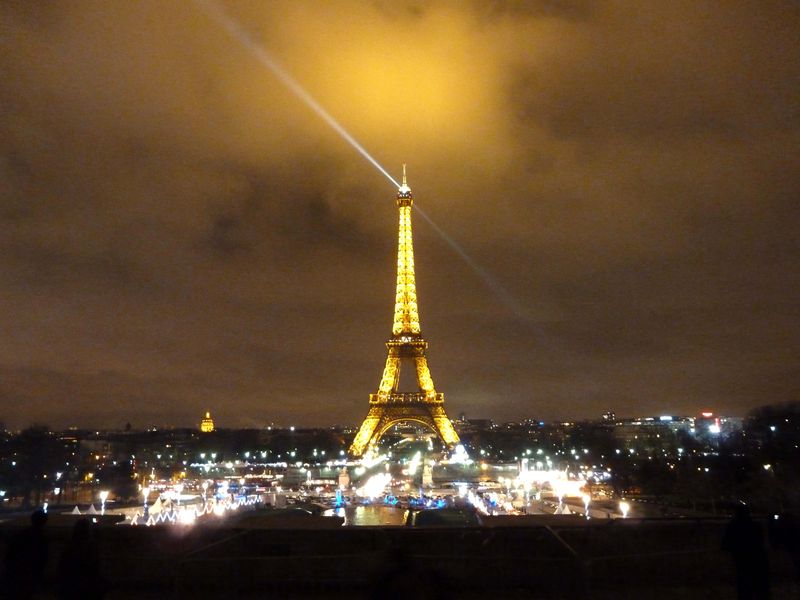 My honey-pie turned 50 on Dec 23rd.  As crazy as we are with the move, the morning of his b-day we hopped on the train to Paris for the night.  We came home the next day, which was Christmas Eve. 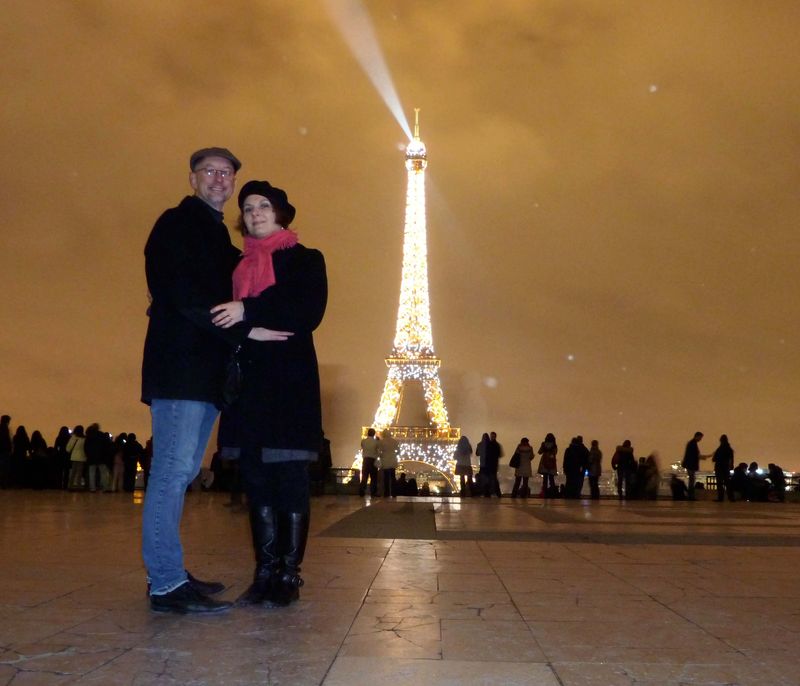 He did all HIS favorite things on HIS special birthday

We visited the Christmas Market: 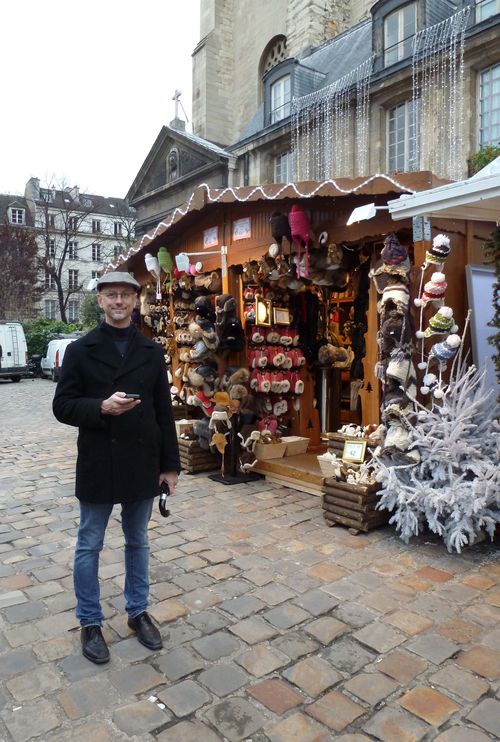 We discovered fabulous caramels made by Henri Le Roux.  I love caramels, D is so-so about them.  But after eating an entire bag - he agreed these were delicious and the best he had ever eaten. 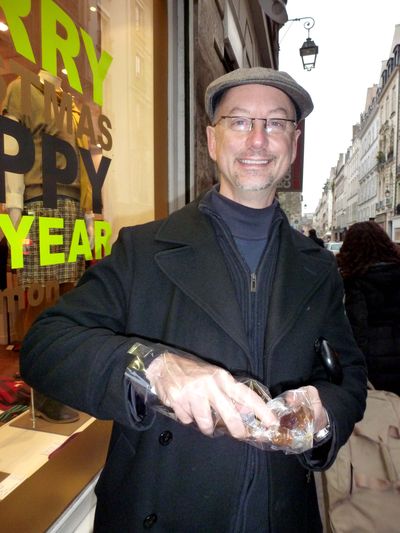 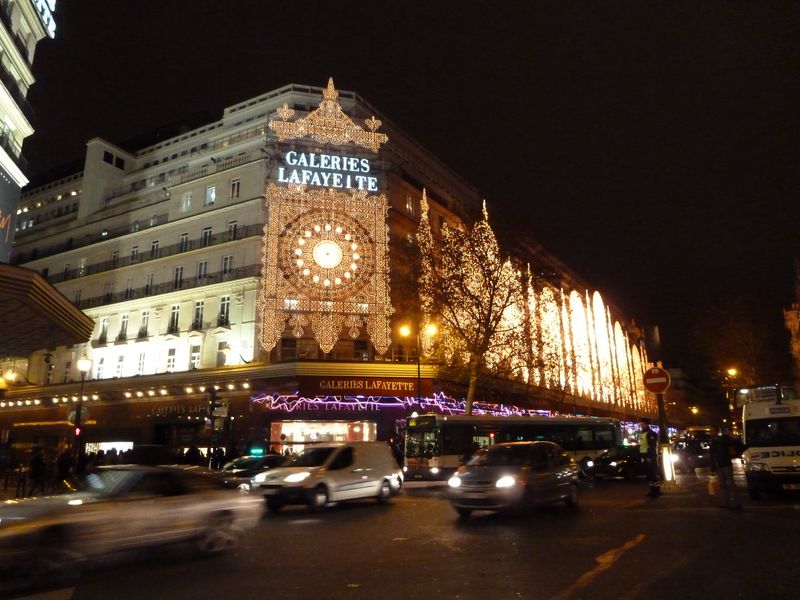 Galeries Lafayette’s theme was “Noël Rock ‘n’ Mode” created by New York artist Andrew Yang.  Because they are animated, it is very difficult to get clear photos. 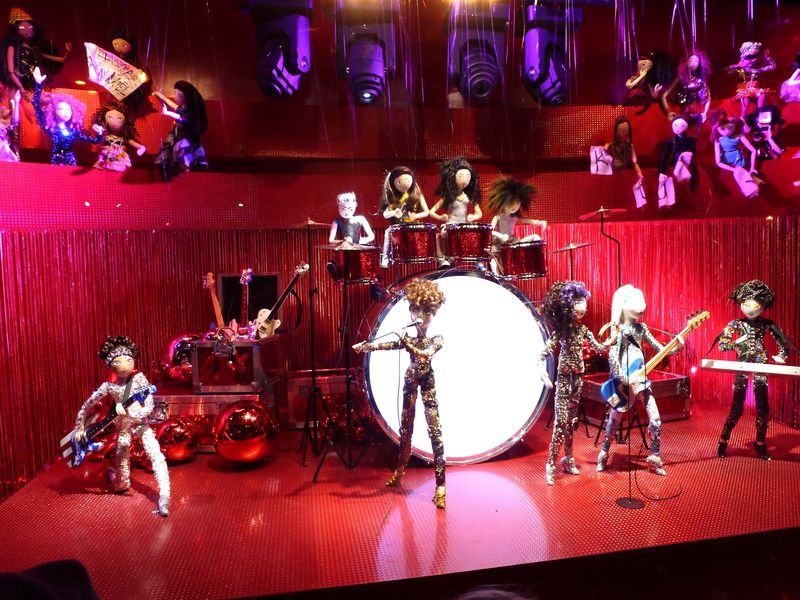 The miniature puppets were called Kouklistar poupées with names like Brigitte, Imany, and Inna Modja, along with Mademoiselle K, Medi, and Cyril Mokaiesh. Made of soft muslin and hand-painted, they danced away in front of the crowds. 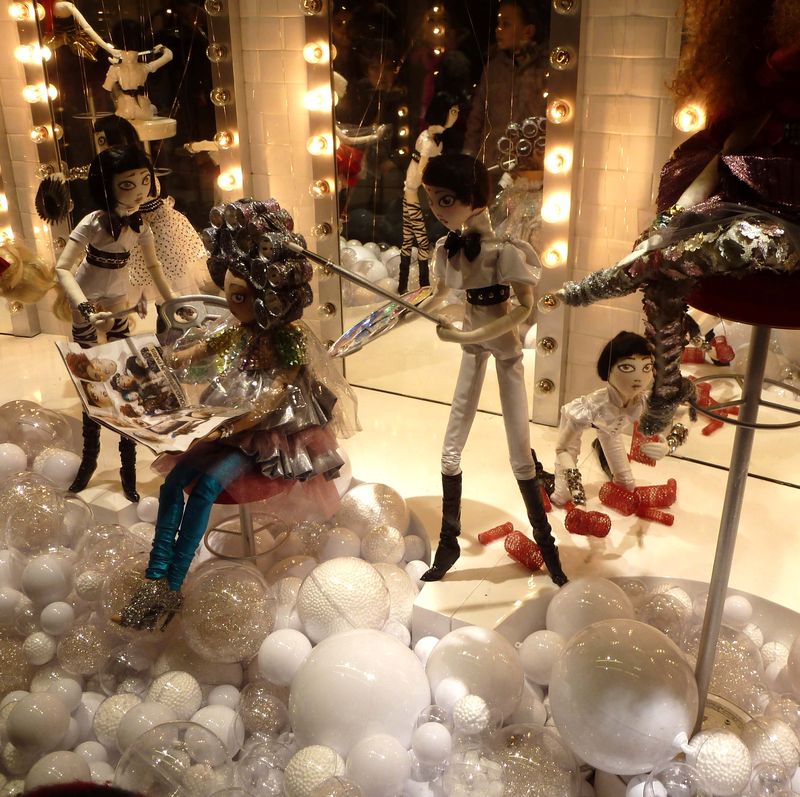 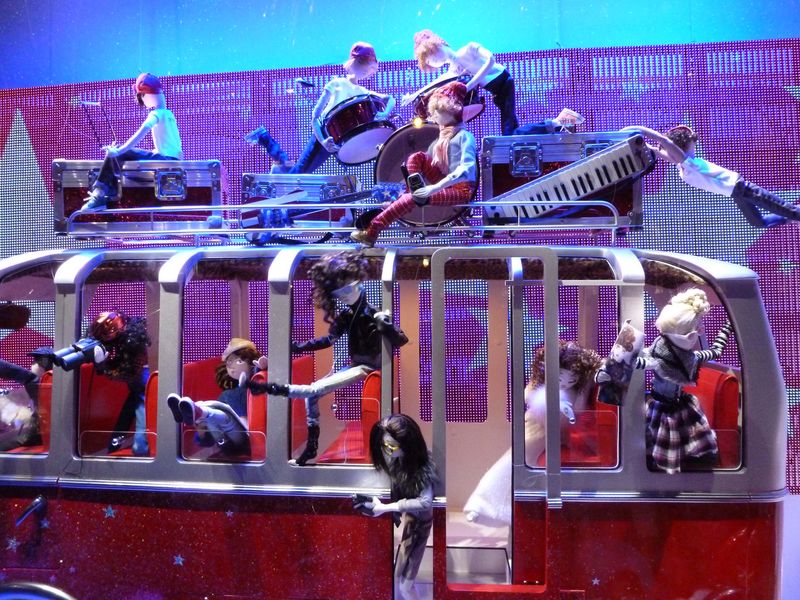 Inside Galeries Lafayette there is a huge tree in the center of the store that goes up 66 feet, almost reaching the the grand domed ceiling, created in 1912.  It was decked out in  55 neon signs continuing the "Rock in Mode" theme.  The store was so crowded, we only took a quick look at the tree and left.  I must be getting old  :  ) 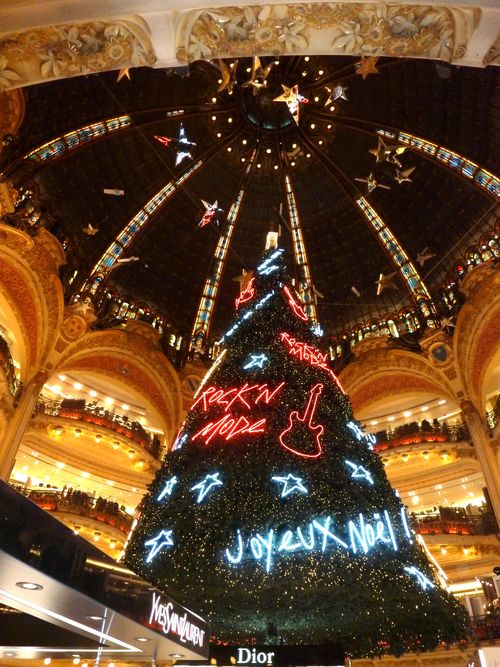 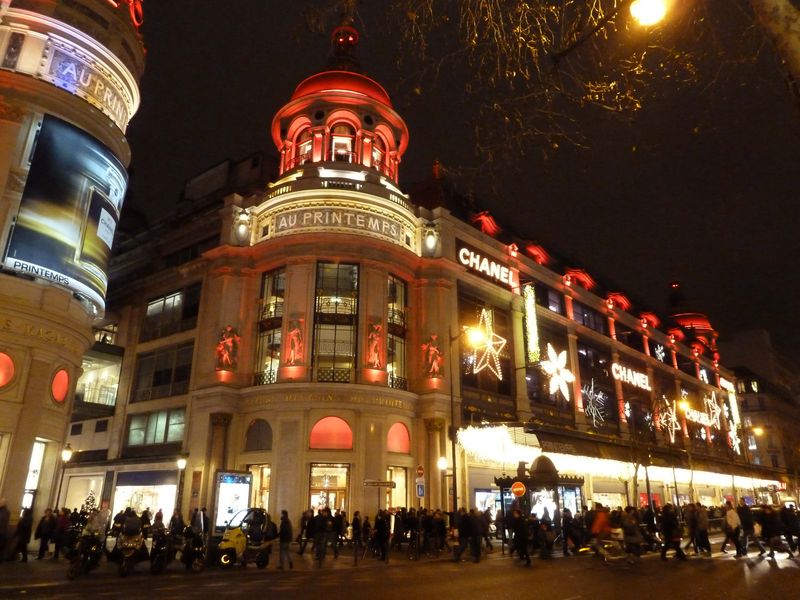 At Printemps, the windows were created by Karl Lagerfeld. Titled "Christmas Dreams of Far Away", the windows displayed holiday scenes from legendary cities around the world.  The cities were selected by Lagerfeld as sources of inspiration and destinations that have been part of Chanel’s history. 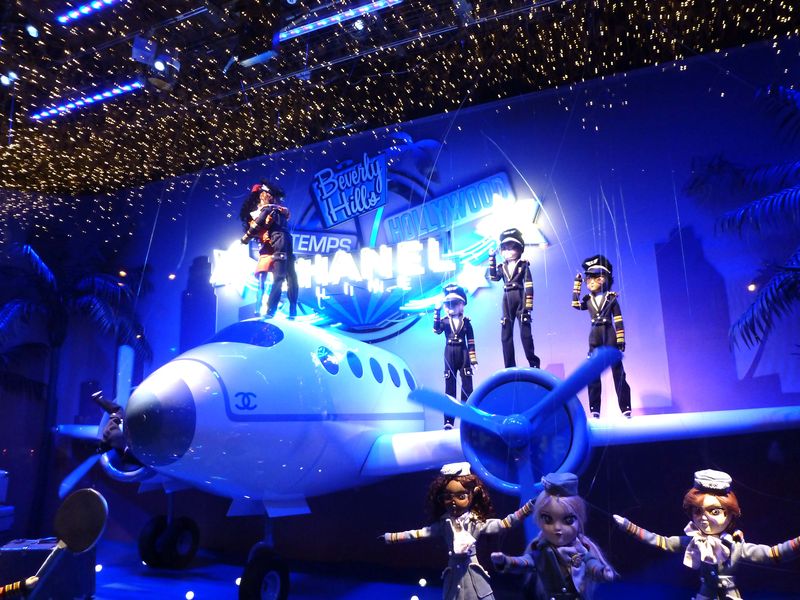 His concept was designed to take visitors on a small trip around the world in just a few minutes. It even had an airplane from Los Angles to take you on this magical ride. Featuring a pilot and a flight attendant embraced in a kiss on the top of the plane. 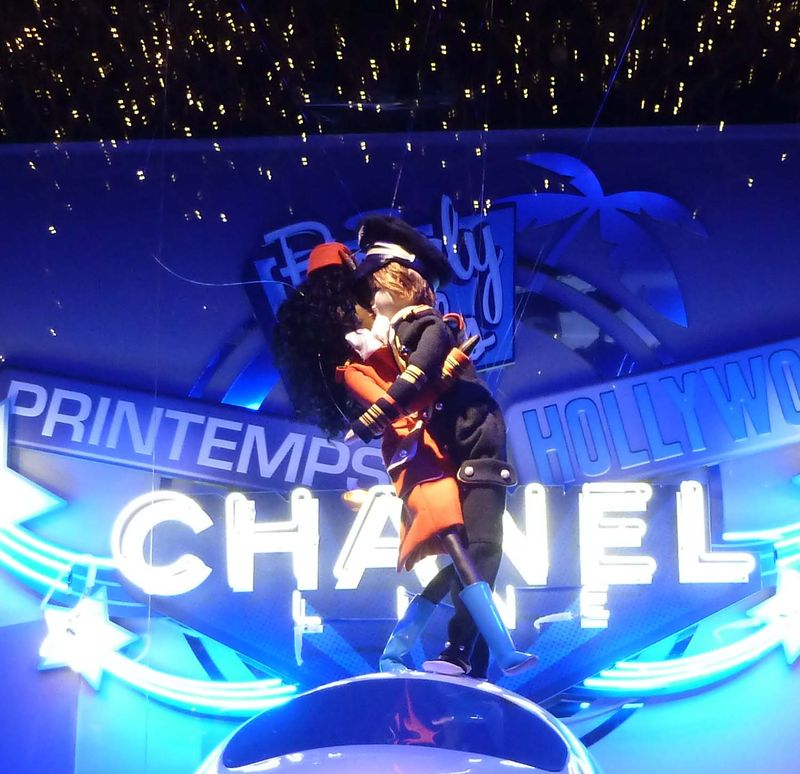 The displays had an enchanting appeal, fused with Lagerfeld’s trademark charisma and flair.  Many were animated, but not all.

A few of the cities included Moscow: 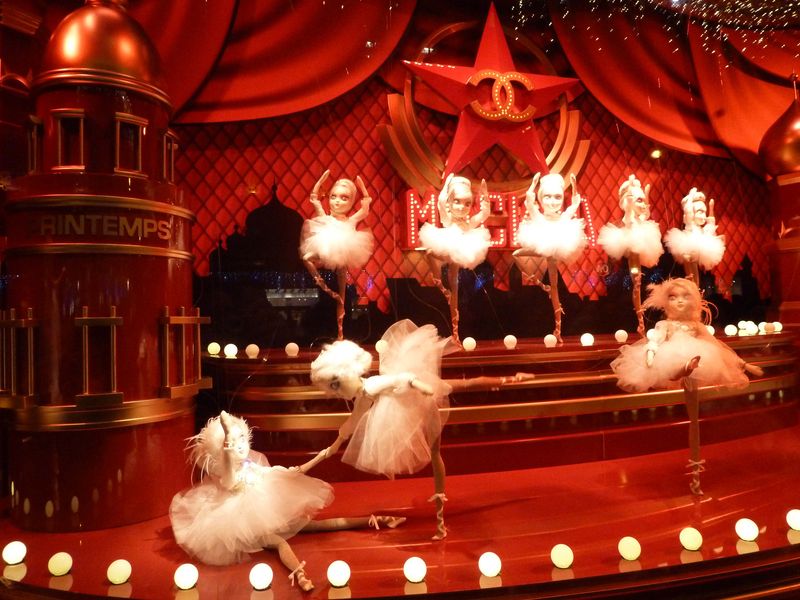 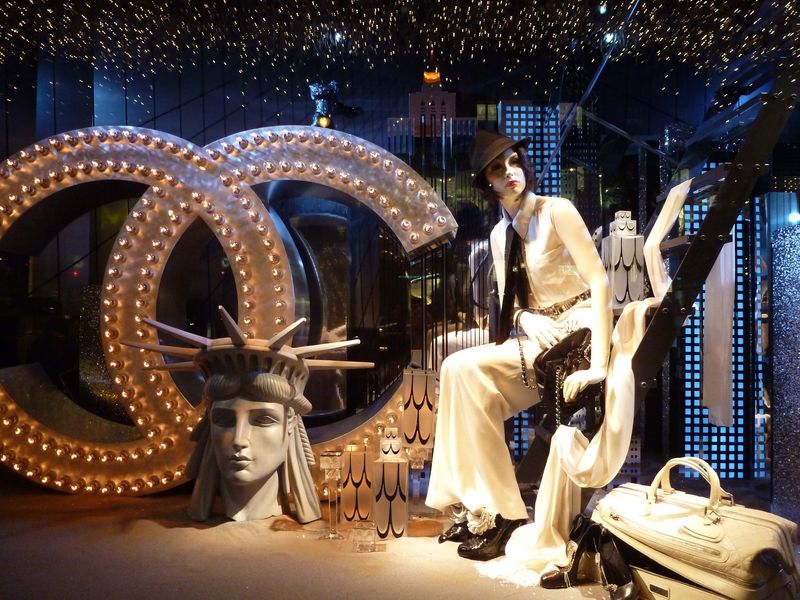 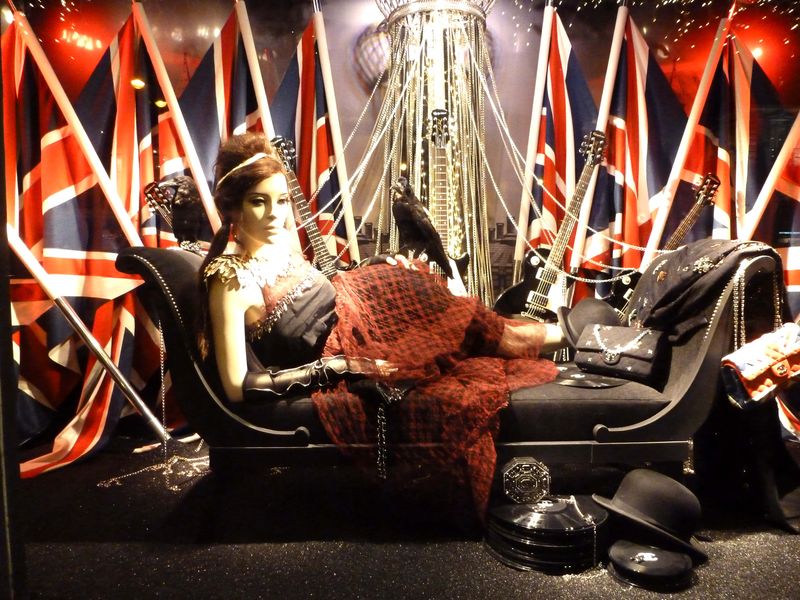 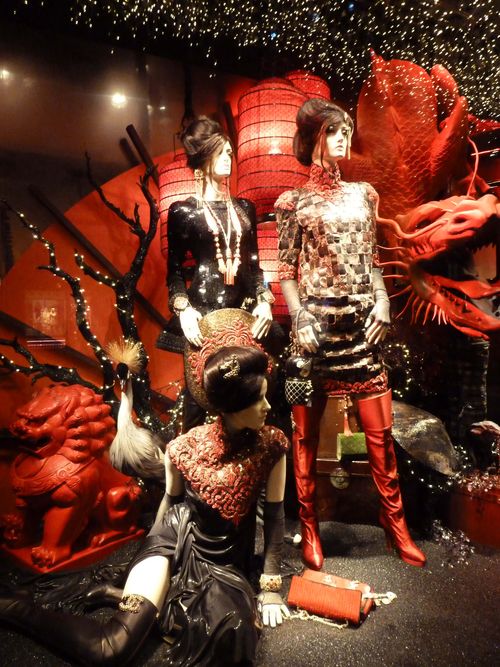 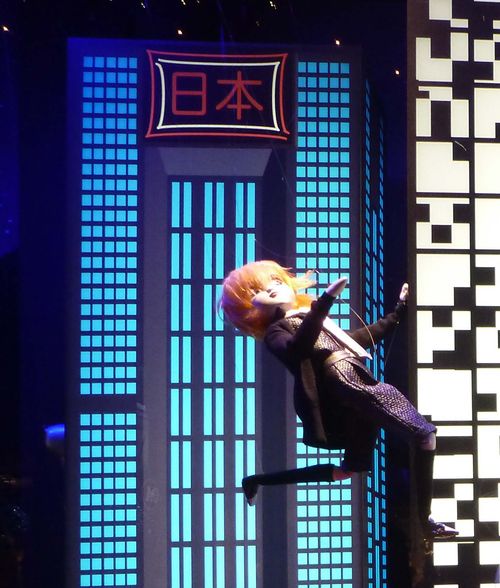 And I am not sure which country this one is from: 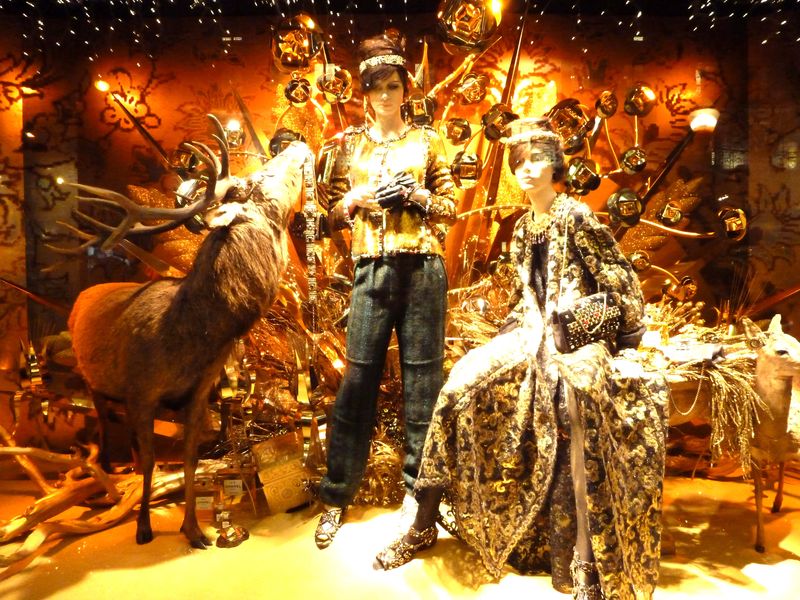 My favorite, was Paris - with many tiny Carls dancing around the city.... 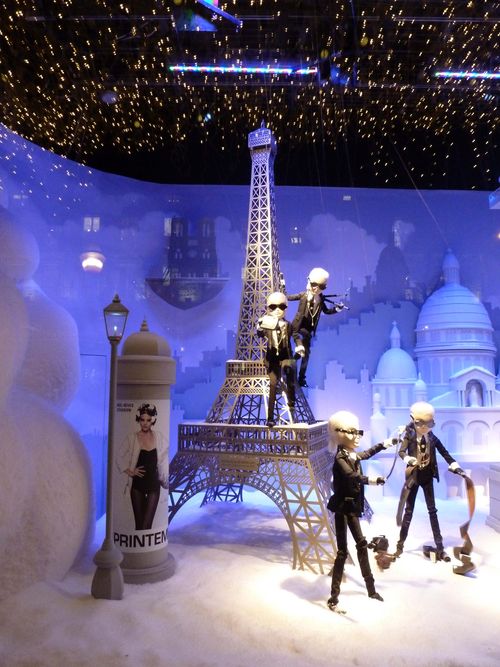 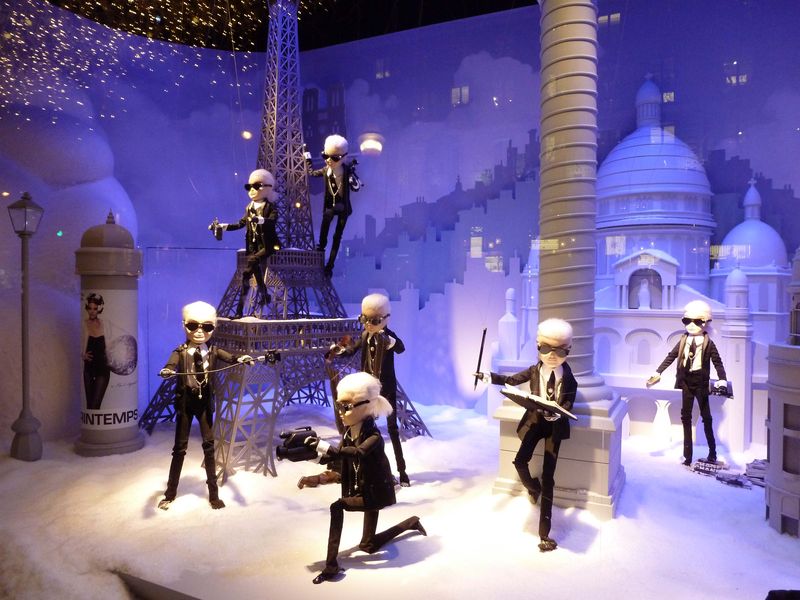 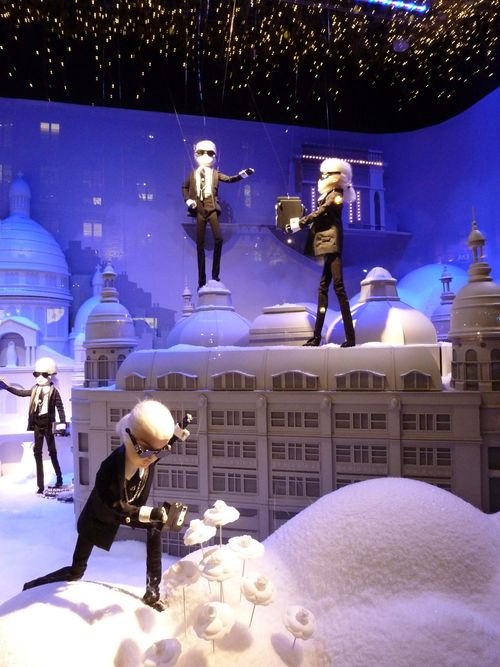 For D's birthday dinner we ate at Le Tir Bouchon, one of our favorite Parisian restaurants in the 2nd arrondissement.  D had baked camembert cheese for a starter, and the beef onglet in a red wine sauce for his main.  I had ravioli des poisson (fish) and the house special of duck confit, foie gras, and mashed potatoes.  We had a lovely bottle of red wine from St Emillion and we shared a chocoalte moelleux for dessert.  It was a delicious meal. 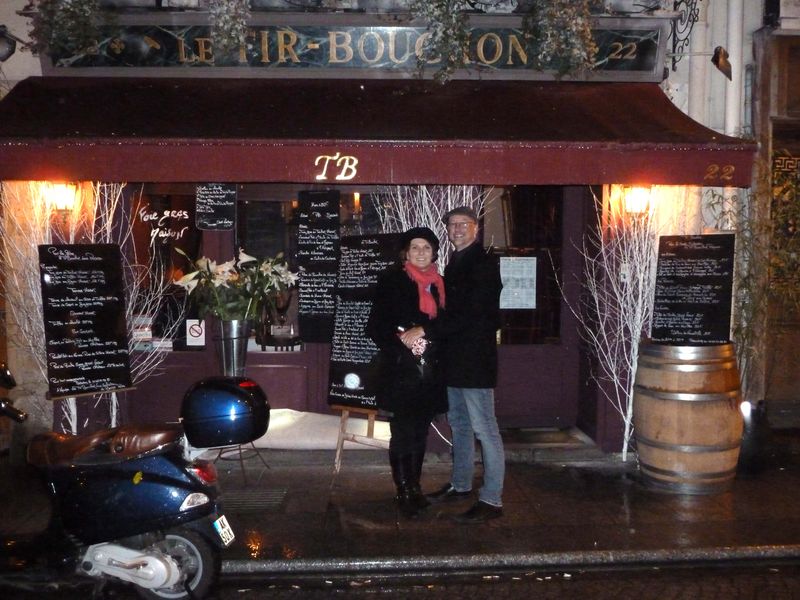 The next day, to continue doing all of D's favortie things for his B-day weekend, we went to the flea market!  Wasn't he lucky that it was open Christmas Eve Day? 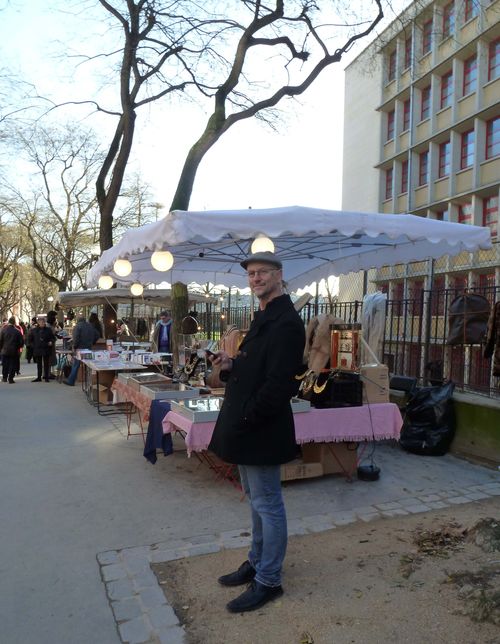 We ate lunch at another favorite Brasseries just down the street from the flea - La Porte Didot.  It is a very local place where they serve typical French food.  Always good.  We also got to visit Dave and Fatama in their new Paris apartment.  They just moved in on Dec 21 so I did not think it was fair to take any photos. 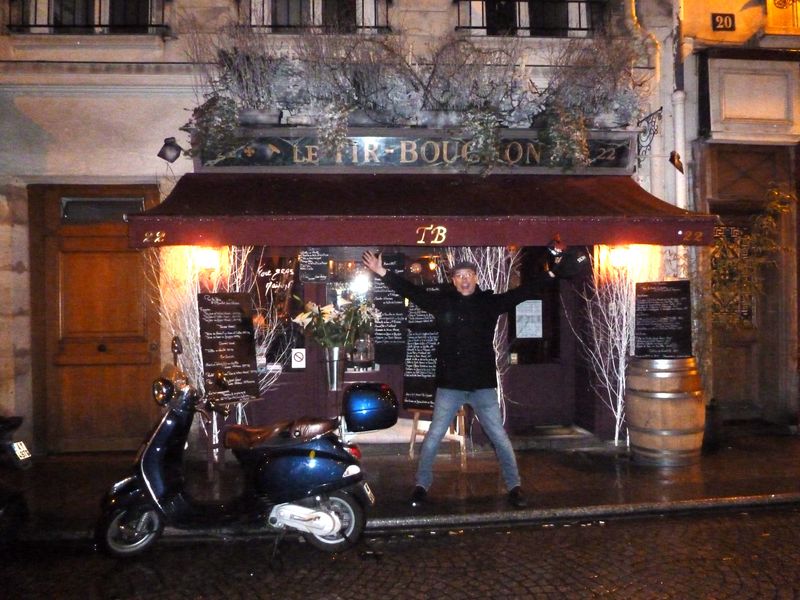 Farewell Paris - we may not see you again for many years! Fun photos, Cathy! Happy Birthday to D! It looks like he had a fun 50th in Paris. I too had a birthday on the 23rd (51) but was not so lucky to celebrate in Paris...I'll have to put that on my wish list for a the future :)