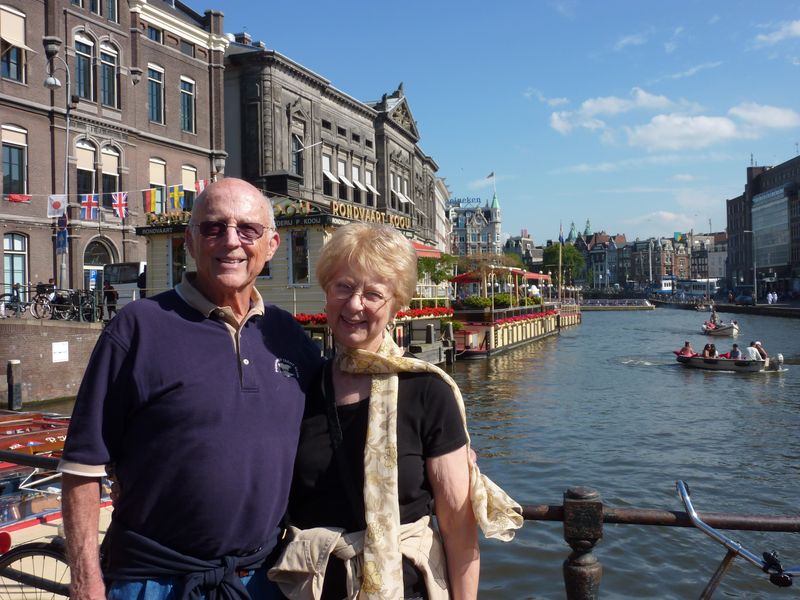 Unfortunately I came down with a very sore throat (the first time I have been sick since we moved to Belgium) so D, D, and D ventured out to Amsterdam for the day without me. 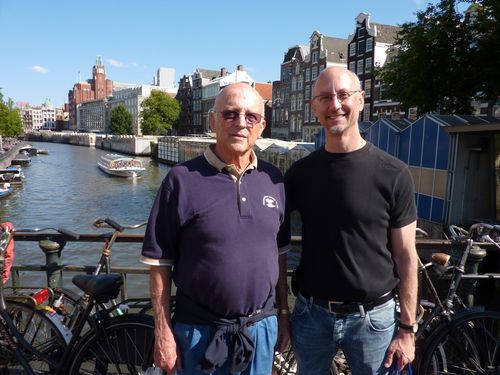 This entry is written through Donna's eyes, based on her travel journal which she wrote in daily and the photos were taken by D, all nine of them.  I take 500, he takes 8.

We arrived in Amsterdam and it was a beautiful sunny clear day. 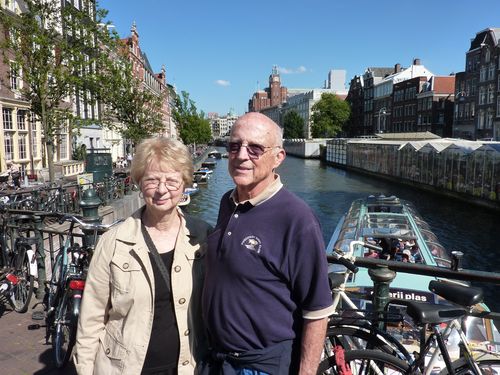 First, we took a one hour canal ride.  It was an enclosed glass boat (like the one above Don's shoulder).  We saw houseboats from beautiful to shabby.  Our boat barely made it under one of the bridges.

After the boat ride we walked through part of the Red Light District to get to Chinatown where we ate lunch.  We had ribs, duck, veggies, rice and tea. 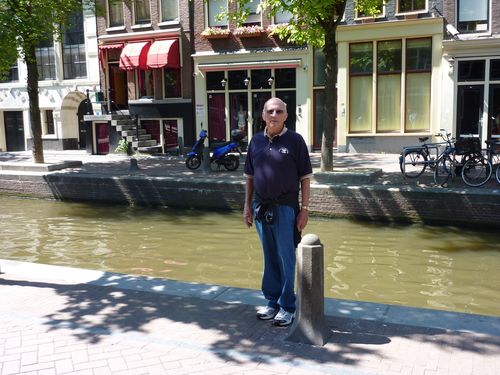 We walked back through the Red Light District.  Some very attractive girls.  Some on the phone in the windows with red drapes.

Cathy's comment - The red light district has been on Don's "bucket list"....so glad he had the chance to see it in person! 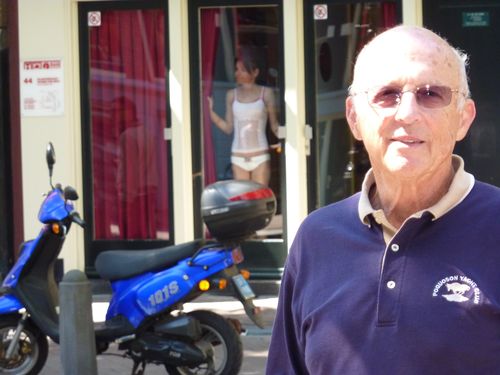 We walked around the city for awhile.  Saw the Ann Frank House, but the line was too long to get in.  Saw cafe smoke shops.  Cathy's comment - if you remember from an earlier Amsterdam Blog.....pot is legal in Amsterdam and they smoke it openly at the coffee shops. 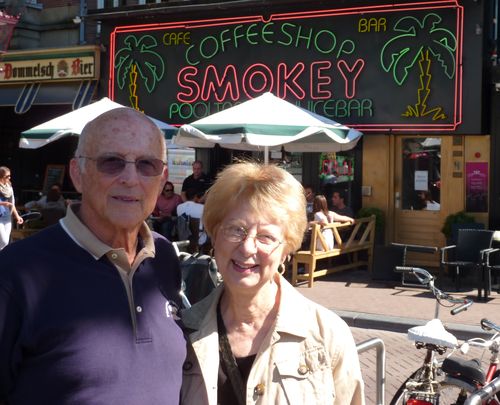 Thousands of bikes in parking garage.  Lots of young people. 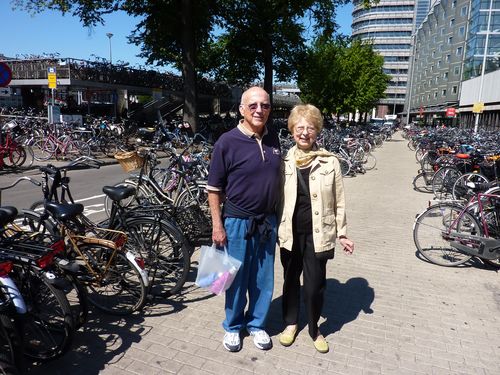 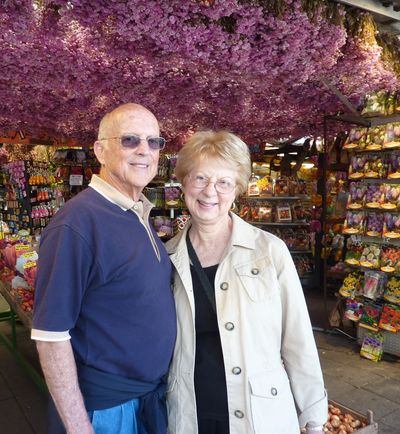 Back to train station.  Picked up sandwiches and water to eat on the train ride home.  A lady around 60 sat in our pod with us on the train.  She had several bags and a violin.  She drank a coke and was very chatty.  She told us she was a "busker" - a person who entertains in public places for money.  We got home around 9:05.

A visit to the Victor Horta House and Museum.  He was Belgian and one of the most prominent Art Nouveau architects of the century.  Many of his designs survived the years including his own home which is now a museum. 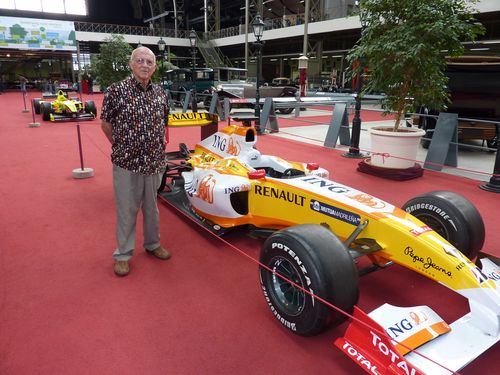 Drinks at our favorite wine bar.  We like to stop by on Wednesday's on our way to the evening market. 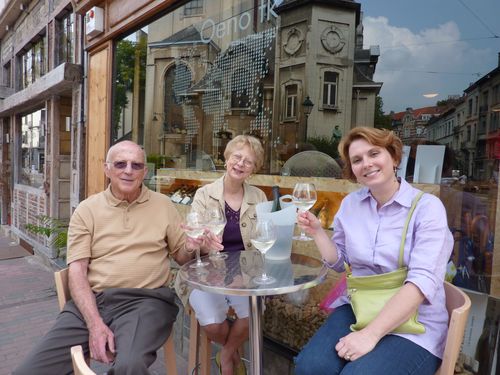 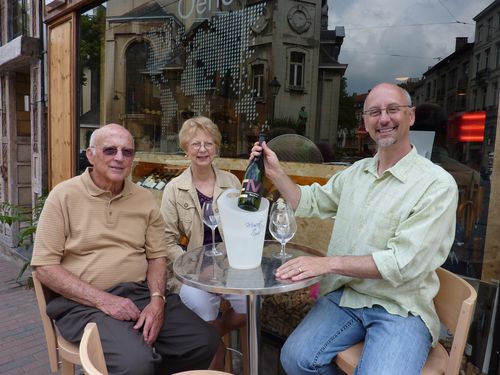 How sweet is this?

After 50 years of marriage they are still holding hands. 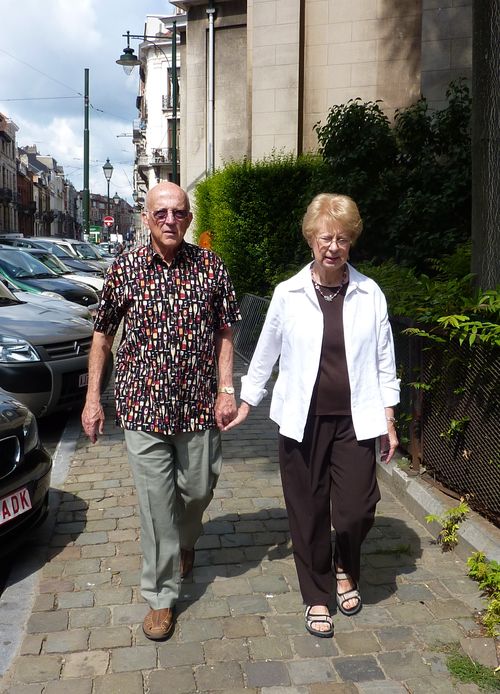 They truly are our role models for a great marriage and I hope that we will one day see our 50th wedding anniversary! 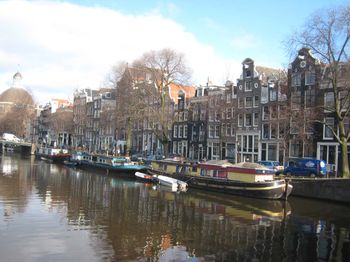 Donald had a two-day trip to Amsterdam so I tagged along to keep him company on the train.  I got lucky and had one sunny day.

I finally made it to the Ann Frank House.  No photos were allowed inside of the house, but here is a shot of the outside.  It is the taller one with the three rows of windows and the white panels.  The website is very interesting, I encourage you to check it out. 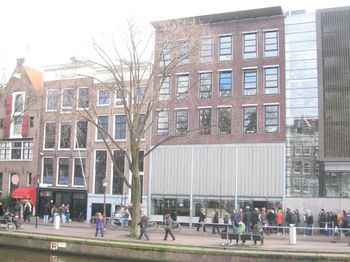 Otto Frank, her father, was closely involved in setting up the museum and he refused to have any furniture in it.  So the rooms do appear larger than you would have expected.  It has undergone several remodels and a face lift to the front to take it back to its orginal state, but the rooms where they lived are in authentic condition.  In 2007 over one million visitors went into the museum.

Since I have given you a tour of Amsterdam in a previous blog.... I decided to focus on the ever popular bicycle.  There are 700,000 bicycles in Amsterdam.  Each year close to 80,000 are stolen.  I was intrigued with the bells and mascots on the bikes. 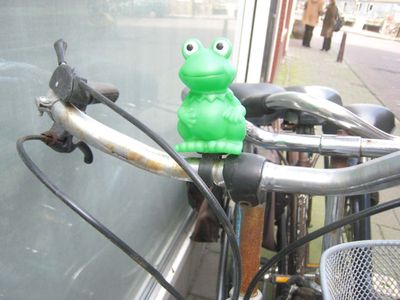 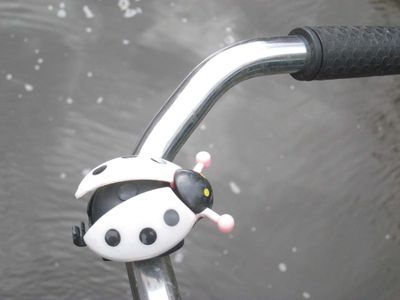 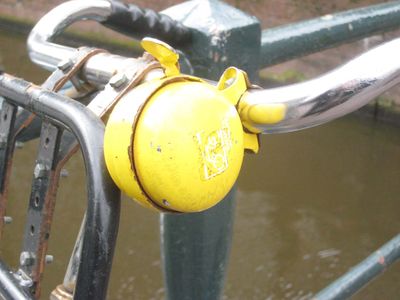 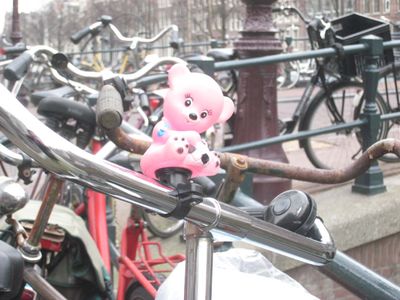 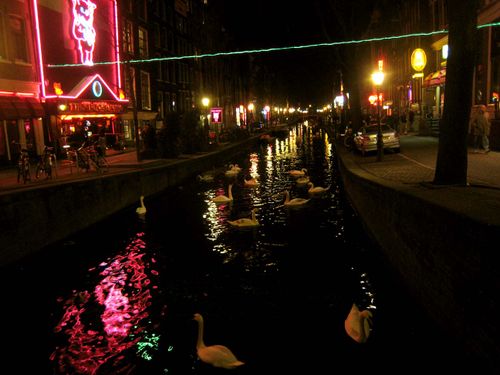 Just a funny note about Amsterdam.....the restaurants went non-smoking.  Marijuana is still legal and can be smoked in the "coffee shops".  But no alcohol, hard drugs or  cigarettes.  Explain that one!

Must be 18 years or older to read this edition!

Whew….where do I begin?  What a beautiful sweet little city with a raunchy side that rivals no other.  Did you know that cannabis, marijuana, pot, hooka, whatever your generation calls IS LEGAL!   You can buy it (as long as you are over 18 and it can not exceed 5 grams) so there are hundreds of  “coffee” houses/shops where people buy it and openly sit and smoke it.

Just walk by and the smell tickles your nose!
And for those of you wondering.......no, we DID not smoke any!

What else is legal in Amsterdam ?  Prostitution.  I tried to take a photo in the “red light district”, but photos are NOT allowed and you can get into a lot of trouble for taking them.  Most are in the major tourist section.  It is a network of alleys containing several hundred tiny one-room apartments rented by female prostitutes (and some ladyboys – you do the math) who offer their services from behind a window or glass door.  Most of the girls are very cute and skinny with flat 18 yr old tummies on them.  There were very few “ big boobed American types”.

The red lights run along the side and tops of the windows and the women stand in the windows.  When the lights are on, they are open for business.  When a man goes in, they close the curtain.  We stood in one area for about 15 minutes and we saw four men entered various rooms and saw one come out.  He was very happy.  The rooms looked clean (we’ll at least from our vantage point), almost clinical and they constantly wipe their windows.

This photo is not a good one of the two of us, but the background captures the city so well, the red lights and the silhouette of the man.  I could write the entire blog on this subject, but as my mother-in-law would say -  move on.

Amsterdam is the capital of the Netherlands .  It is a city built on canals.  The canals are all beautiful and picturesque.  Our hotel was a 300 year old canal home.

It was at the end of this canal on the left (close to the bridge).

This was the view looking out our bedroom window.  The rooms were filled with antiques and each morning our breakfast was brought to us on a try with nice china.  The two men who ran it were so friendly and went out of their way to help Donald print a few copies of a work document.

Work report – Donald really worked this trip.  A LOT !  All day Sunday – Friday, with three evening dinner events.  I did go to one dinner with him and we managed to squeeze in pomme frites and capture our traditional frites photo!

So the pictures you are seeing of Amsterdam are Cathy’s Amsterdam vacation!  I spent a lot of time just wandering around the canals.  It was so peaceful.

Arles painting.http://www3.vangoghmuseum.nl/vgm/index.jsp
There was a very interesting artist on view, John Everett Millais (1829-1896) Britain ’s most successful artist of the latter half of the 19th century.  You might know his most famous piece Ophelia http://www3.vangoghmuseum.nl/vgm/index.jsp?page=127004&lang=en. I also visited the Willet Holthuysen Museum , a 17th century canal home that is fully furnished:  http://www.willetholthuysen.nl/.

And always very important finding the perfect BEAD shop!  This was one of the best I have ever been in.  And the very best part of my visit – Donald was not there so I could say as-long-as-I wanted to!  He had many old beads on display, and the owner told me many interesting facts about lost of the beads…..so technically it was a museum.

This was in the main square.....birds everywhere.

The funnier photo would have been of me - trying to keep the birds off of my head while I took the photo of him.  They were flying all over everyone......gross!

It is hard to describe how many bicycles are in Amsterdam.  They say there are more bicycles than people, and more bicycles per capita than any other European country.  They actually have a bicycle parking problem.

There isn't enough space on the streets and sidewalks to put them. The theft rate of bicycles is extremely high so most of them are very old and beat up.  They use big locks and secure them to all kinds of odd fixtures; anything that is cemented to the ground or bolted to a building is fair game. They have bike racks around town, but they are all filled to capacity. The scene in front of the train  stations is especially amazing; hundreds and hundreds of bikes chained to the racks, railings, sign posts, each other.  Here a man is giving his small child a ride.

You really have to watch out for the bikes as they have the right-of-way (or at least they think they do) and they will ring their bell at you and THEN run you over!


There are many bikes with "fun" personalities.

We had a celebrity sighting - Brian Adams, rocker from the 80's.  We were in the hotel lobby where most of Donald's co-worked were staying.  As soon as I saw him I told D that's Brian Adams.  Sure enough, he answered his cell phone this is Brian.  He had a small entourage with him.  He knew that I knew who he was as he kept smiling at me.  He did make the comment - "what's with all these tall people in Amsterdam.  Makes me look really short!"  We all laughed...it was my "moment" with fame.  I did look him up and he had a show that night........guess he is trying to make a come back.  For those of you trying to remember who he is...he sang cuts like a knife and summer of 69.  Was not bold enough to take a photo.

and to end this blog  - one of my favorite photos of the trip.

First part of April:  Cairo Egypt!  Now that will be a cool blog!