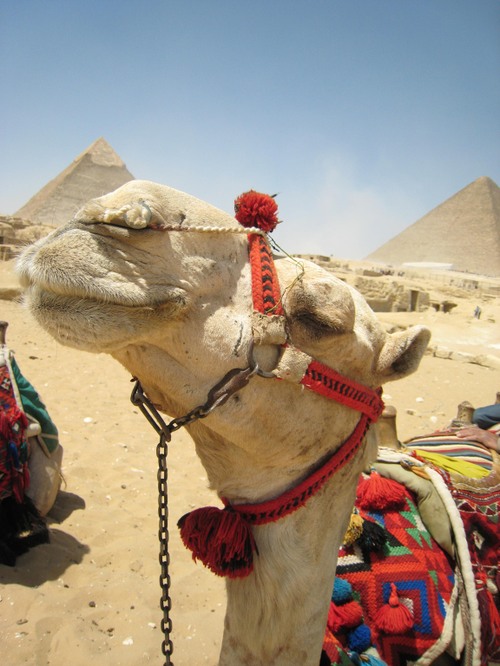 This is a SUPER sized Blog!  We were there for 5 days and took over 1000 photos.  It took me 10 days (twice as long as the trip) to select the photos to place in the blog.

We had many arguments as to what to keep in/delete out.  We hope you enjoy the ones we agreed on!!  ps.....if you want to see a few more, please visit our slide show.  Instructions at the end of the blog.
Wow.

WOW!  Where do I begin?  What a spectacular trip we had.  We LOVED Egypt .  Cairo is the capital of Egypt and the largest city in Africa.  It's chaotic, exotic, dusty and beautiful!

More than 16 million people live there.  Egypt has an energy like no other.  It is a fascinating country.  Despite its dust and poverty, it is a beautiful country in so many ways.

The people are happy and very friendly, loving and family oriented.  I know, I know I say every country is friendly – but Egypt has reached a new high.  This is one of the Pyramid policemen.  He let Donald ride his camel Antonio. 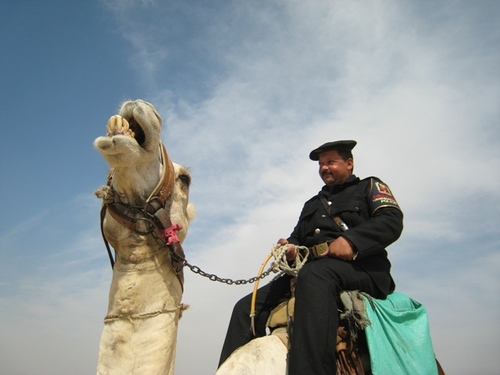 Driving is Crazy!  We Arrived at the airport and had the VIP treatment getting through.  That Diplomat passport paid off on this trip.  We arrived late in the afternoon and decided to go to the local mall and food court for dinner.  BOOM.  Our taxi was hit!  Welcome to Egypt as many told us.  It was just a fender bender.  Good thing it was in front of the mall.  No shopping time wasted :  ). 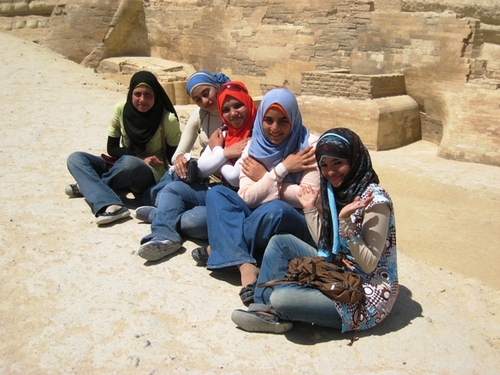 Interestingly enough, we were the ONLY non – Egyptians in the Mall.  So we had quite a lot of looks.  90% of the women still cover their heads with a scarf (hijab), arms and legs.   Here is a photo of young girls at Sphinx.  I was surprised at how colorful they dressed and how their head covering matched their outfits.

The devout religious Muslim women cover their faces and their entire bodies.  As you can see the one in black only has her eyes showing.  We were able to capture a few photos at the market, but they really don't like their photos to be taken. 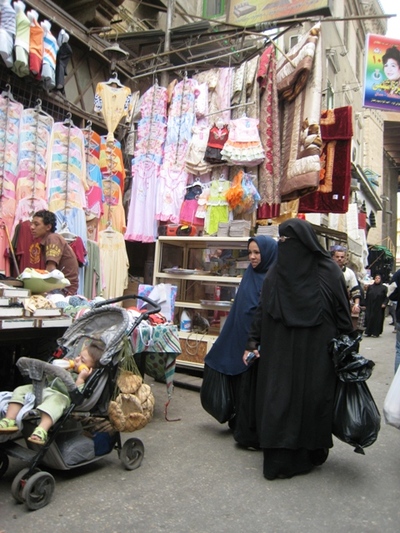 It is a third world country, the first we have visited, and it feels like you have dropped back in time 100 years.  Using donkeys as transportation is still very common.  They ride along the major highways and downtown with the traffic.  This cart was directly in front of us on a MAJOR highway. 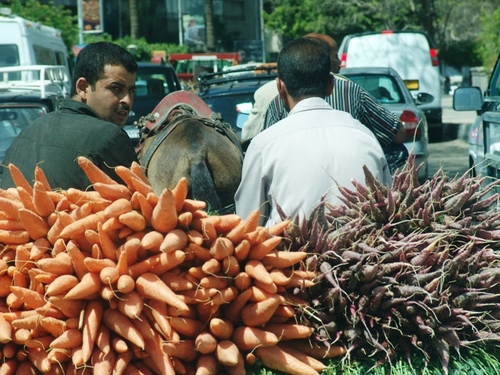 Driving through the small towns was one of our favorite experiences.  Hard to believe how different their world is from ours. 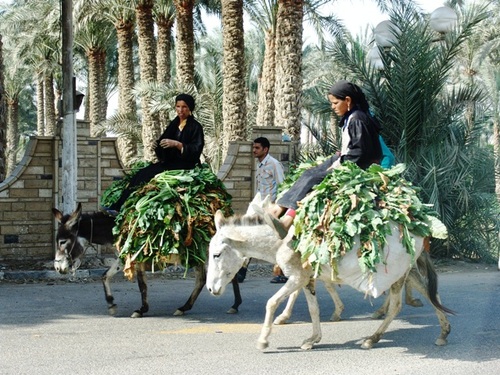 Women balancing items on thier heads was very common to see. 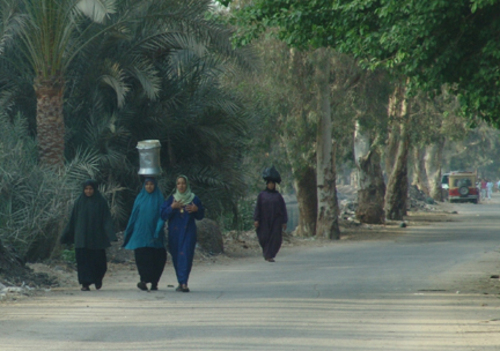 We hired a fabulous tour guide Karen, http://www.heartofegypt.com/, for 3 full days.  She was the best!  Here is a photo of Donald and Karen in the mosque. 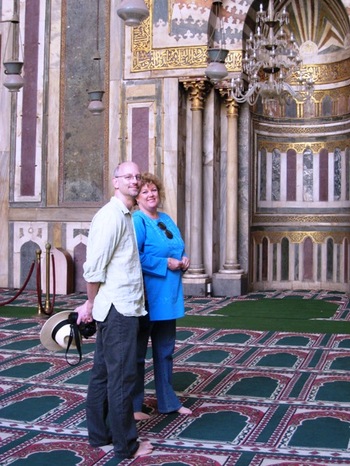 Note they do not have their shoes on.  They are standing on a prayer mat.  Each cube is used by one person.

Karen took us to local places for lunch and yes we ate salads and fruit drinks. And no, neither one of us got sick.  The food was very flavorful, lots of dips like hummas and a wide variety of breads.  We did not drink the water. 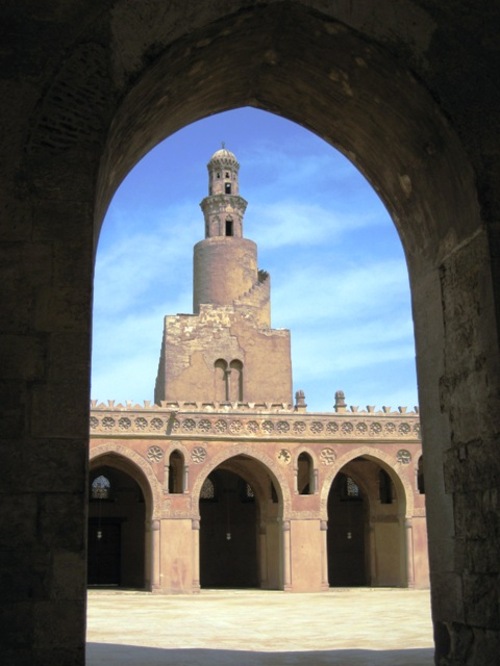 The mosques were facinating.  We visited the mosques of Ahmed Ibn Tulun, Sultan Hassan and al Rifai.
The architecture is beautiful and it is hard to image how they built the structures.  Some dated back to the 9th century. 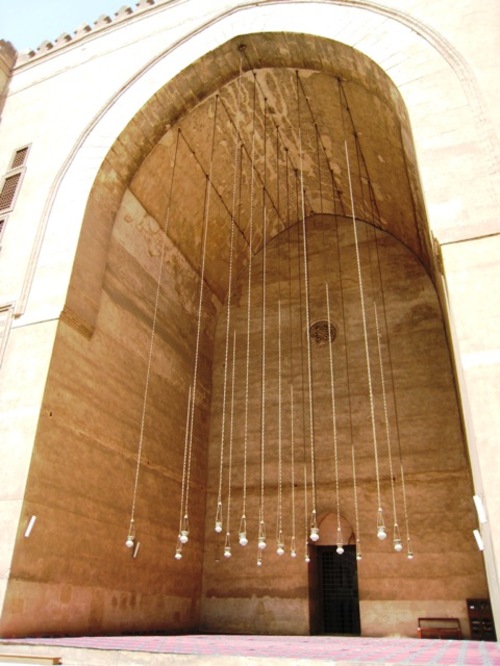 A quiet moment at the mosque. 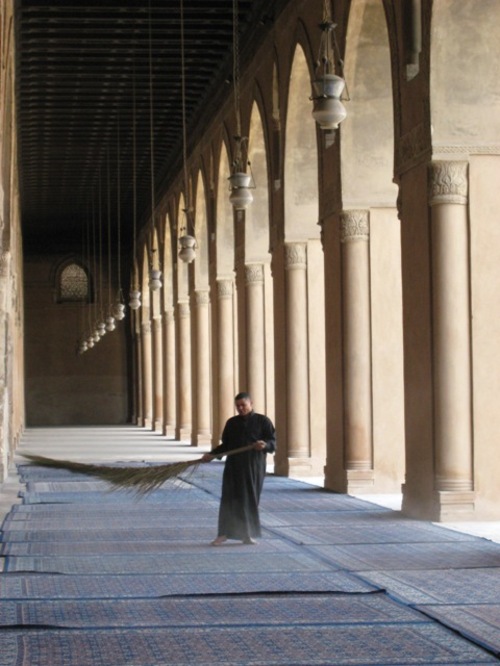 Karen took us to the Egyptian Museum (http://www.egyptianmuseum.gov.eg/) which was established in 1835.  A place you could spend weeks in and still not see everything.  We visited the major exhibits including Tutankhamun the boy-king (king tuts) - AMAZING, and the mummy room (dating from the 18th and 20th Dynasties).  I was inspired by how they buried their dead and purchased my sarcophagus (A container for the human corpse) to have on hand.  We also went to the Solar Boat museum (http://www.touregypt.net/featurestories/solar.htm), 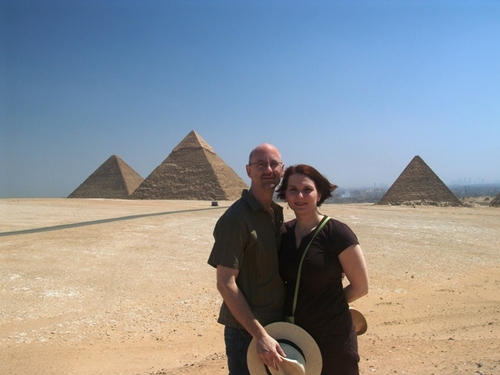 We visited many pyramids -  Giza, Sakkara, Dahshur, and great Sphinx of Giza. 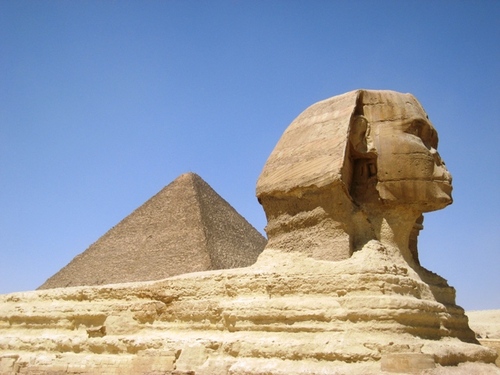 The half-human, half-lion statue - constructed somewhere between 2520 BC and 2494 BC. We took a 45 minute camel ride through the dessert: 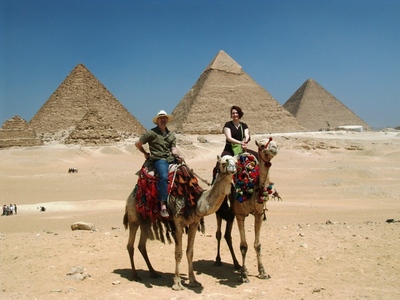 My camel's name was banana. 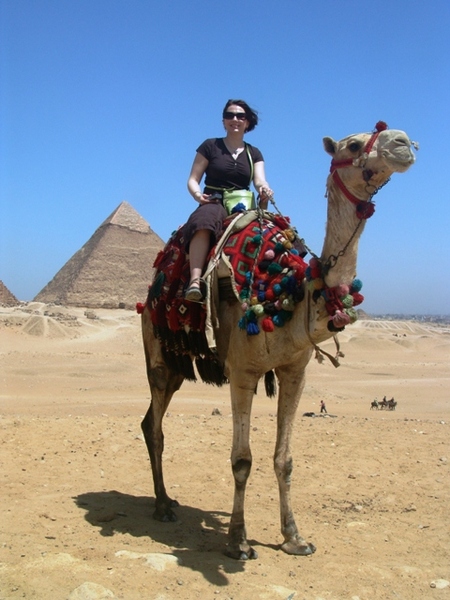 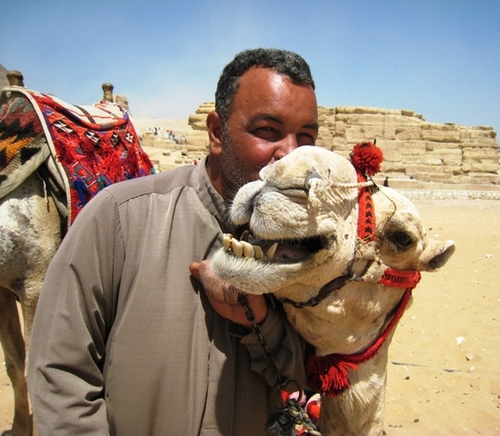 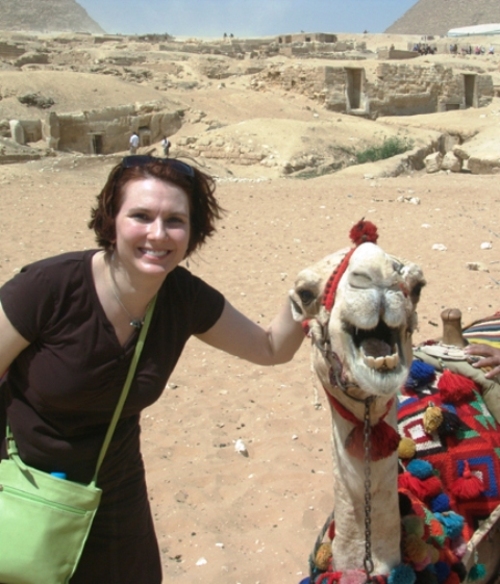 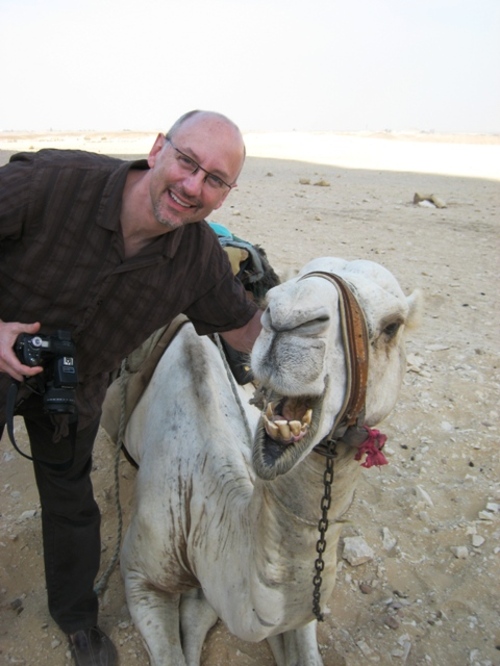 And they LOVE to pose for the camera.  They would be sitting quietly.....
And as soon as you pulled out the camera they smiled: 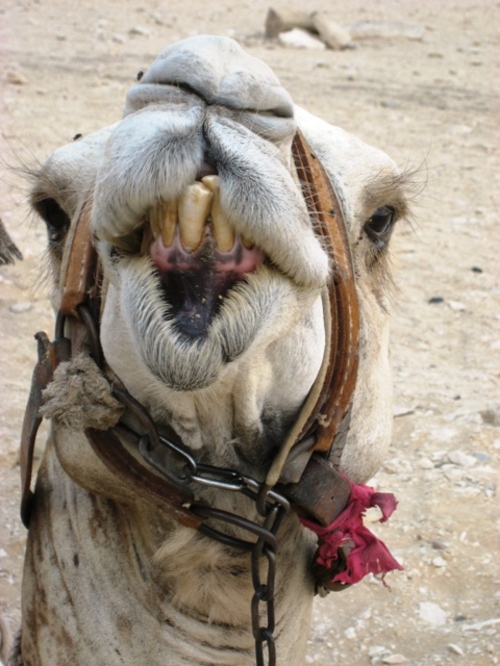 How could you not love this face?

Karen also took us to a local market.  It was very colourful and very very different from our markets. 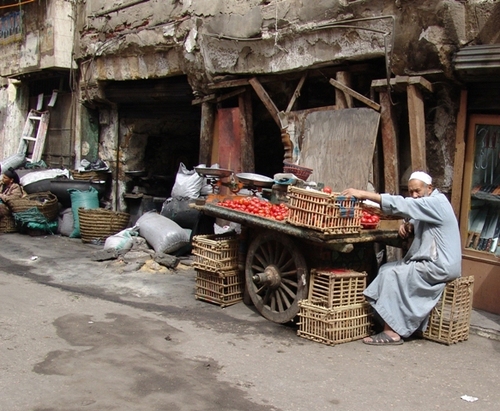 We also visited largest and most famous souk (bazaar) in the Middle East , Khan il-Khalili.  Containing over 900 shops. 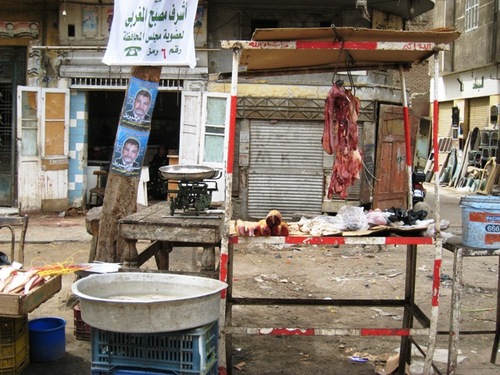 This was the butcher.  Guessing my mom would not eat from this one!

At the market, we heard a little boy crying so hard.  I peaked into a little shop and he was getting his first haircut! 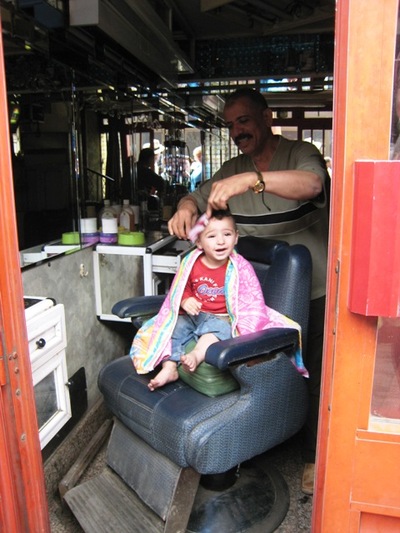 Karen speaks very good Arabic so she was able to translate.  They were happy we were watching and allowed us to take photos.  They even invited us in for tea.  What a sweet intimate moment to share with strangers.

This was one of my favorite photos from the trip:  the boys at Garbage City. 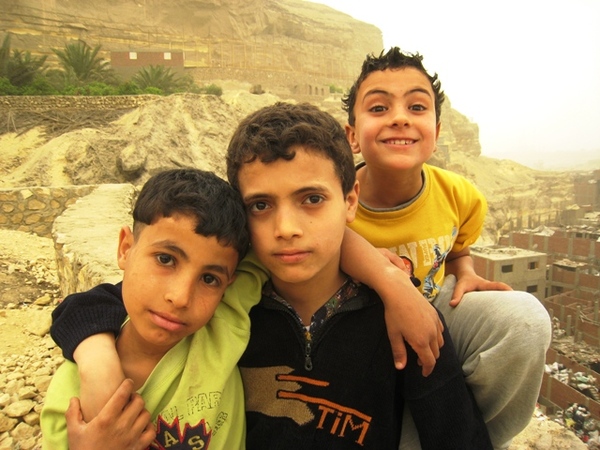 Garbage City was started in the 1950's when the people living there had no means for an income, so they started collecting the trash in Cairo. They brought it back to their neighborhood for sorting and they sold it for recycling.  It is like no other place I have seen, filthy trash everywhere and the smell.. The neighborhoods have shops like any other area, but lack infrastructure - no running water, sewage, or electricity.

Linda (Lisa's cousin) volunteers at an orphanage there 2 times a week.  I admire her greatly for this.  She took me to visit the orphanage but there was a funeral and they were gone.  Despite the environment they live in, they are considered by many to make a very good income for Egypt.  One of the children had a very nice cell phone. 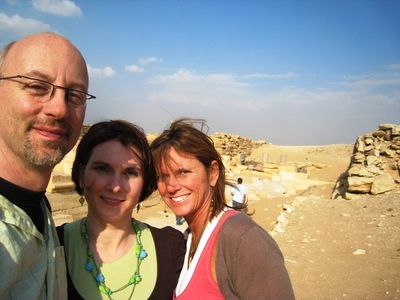 I mentioned my sister-in-law Lisa's cousin Linda.  She is living in Cairo with her husband and daughter.  A big thanks to Ed for connecting us!!  Linda's husband works for the American University in Cairo.  She so graciously spent two days with us.

On the first day, she showed me "her" Egypt.  We went shopping in her local area, had lunch, visited her orphanage and went to a jewelry show at an Egyption women's house (just like Dara!).  I had a great day.  The next day she took us for a quad bike ride. 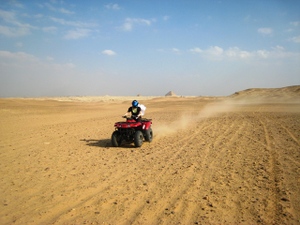 What a BLAST!  We visited pyramids, ruins, crypts and burial grounds. 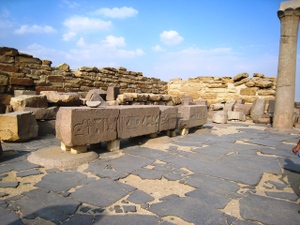 Wild man Donald had a little too much fun.  He lost the good camera and had to back track to find it.  The good news is he found it, the bad new is....have you seen what happens to a camera when you drop it in sand? 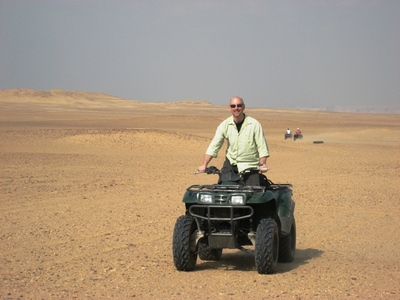 Want to see a few more?  Please visit our Photo Albulm on the main page of this Blog. 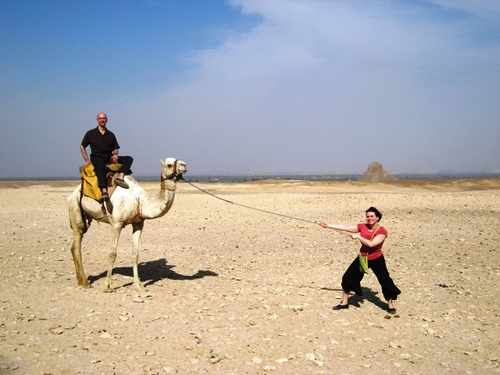